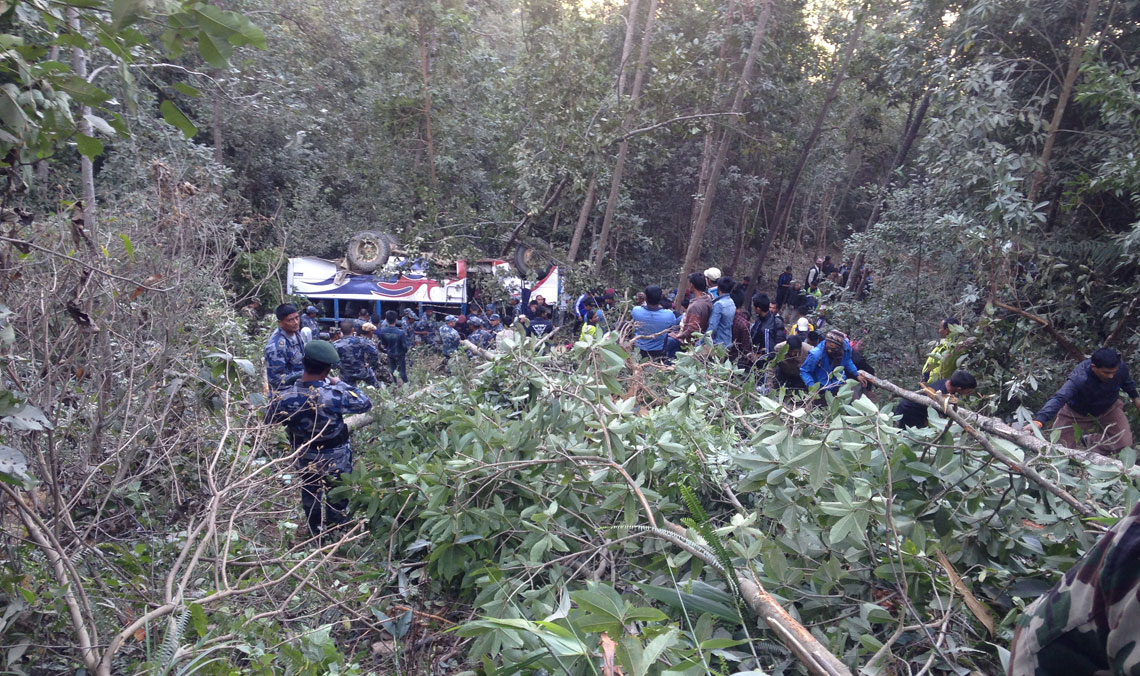 BANEPA, Dec 11: At least five people were killed in two separate road accidents in Terhathum and Kavrepalanchowk districts on Sunday. A bus accident in Gadi of Terhathum district killed three, while a tipper-jeep collision at Bhaisepati near Banepa along the Arniko Highway killed two passengers.

In Tehrathum, the ill-fated bus (Na 4 Kha 2865) en route to Myanglung, the district headquarters of Tehrathum, from Dharan of Sunsari skidded of the road and fell some 100 meters down at Gadi following a brake failure, according to police. All the three persons died on the spot, police said.

At least 28 passengers sustained injuries in the accident that took place in the afternoon, informed deputy superintendent of police Bhagendra Prasad Dhakal of District Police Office (DPO), Terhathum. The identities of the deceased have yet to be ascertained. The injured have been taken to Terhathum District Hospital for treatment.

Likewise, in Kavrepalanchowk, the jeep collided with a tipper in Bhaisepati along the Araniko Highway near Banepa in the morning, killing two. Nine persons, including the jeep driver, were injured.

The jeep (Me 1 Ja 2191) was en route to Kathmandu from Damak, Jhapa, when it collided with the tipper (Ba 4 Kha 3556) coming from the opposite direction, according to police inspector Sukdev Khanal of District Traffic Police Office.

The deceased have been identified as Madan Shrestha of Morang and Nilam Bahdur Karki of Jhapa, police informed. Among the injured were jeep driver Pradeep Bagda and passengers Om Kumar Shah, Bikash Rai and Umesh Kumar Shah, all from Morang; and Anita Rai, Khardar Kumal from Jhapa. All of the injured have returned home after receiving treatment at Scheer Memorial Hospital, Banepa. 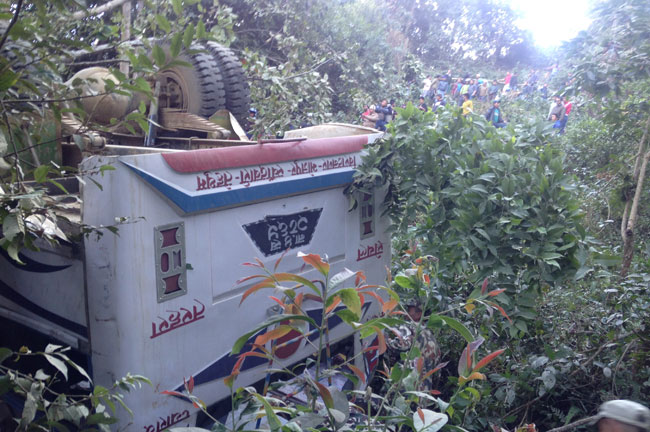 GULMI/UDAYAPUR : At least 19 people were killed and scores others sustained injuries in two separate road accidents in Gulmi... Read More...

DANG, March 2: Two people were killed while 24 others sustained injuries in separate road accidents in the district on... Read More...

LAHAN, March 2: A motorcycle rider died after being hit by a passenger bus along the East-West highway in Golbazaar... Read More...