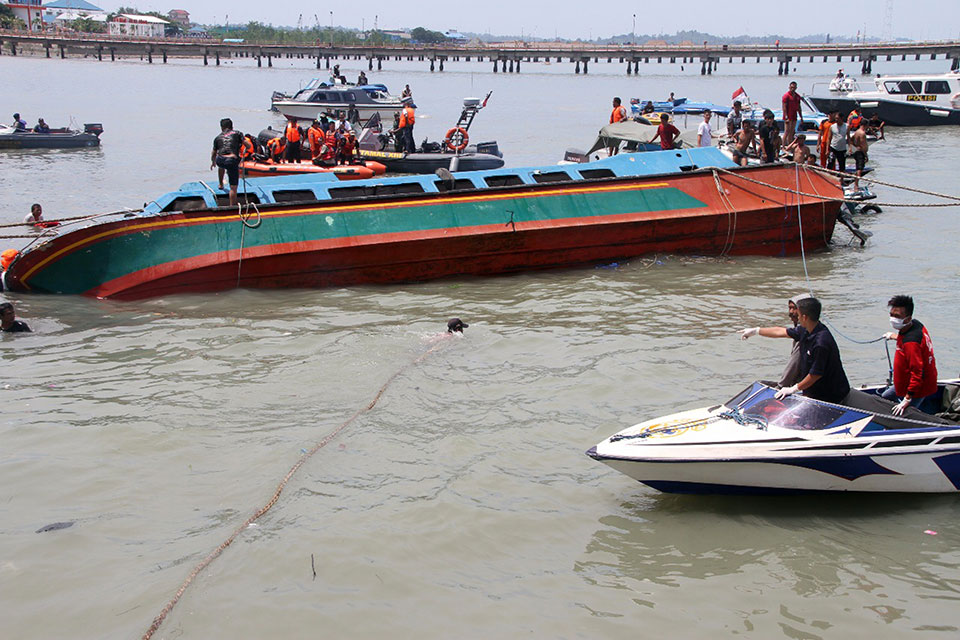 Rescuers attempt to bring a speedboat that sank off Tarakan island to the surface after it was towed towards the shore in North Kalimantan, Indonesia, Tuesday, July 25, 2017. More than a dozen people have been killed and missing in two sea accidents in eastern and central Indonesia since the weekend. Sinkings are common in the world's largest archipelago nation, where boats are a popular and relatively cheap form of transportation. (AP)

The speedboat sank about 10 minutes after it left the town of Tarakan in North Kalimantan province on a one-hour voyage to Tanjung Selor, local Search and Rescue Agency official Octavianto said.

According to the manifest, the boat was carrying three crewmen and 45 passengers, said Octavianto, who uses one name.

He said 29 people — 20 men and nine women — were found alive while seven were found dead.

On Saturday, a wooden boat carrying 18 people hit a log and capsized on the Mamberamo River in Indonesia's easternmost province of Papua, Melkianus Kotta of the local search agency said. Ten people were killed and three others were missing, he said.

Boating accidents are common in Indonesia because of poorly enforced safety regulations in the world's largest archipelago nation, where ships are a popular and relatively cheap form of transportation.

JAKARTA, Indonesia , Jan 1:  A search resumed Monday for 17 people reported missing after a ferry fire off the... Read More...

INDONESIA, May 13: At least nine people have been killed and 40 others injured in bomb attacks, including a suicide blast,... Read More...

Police: At least 12 dead in capsizing of boat of Rohingya