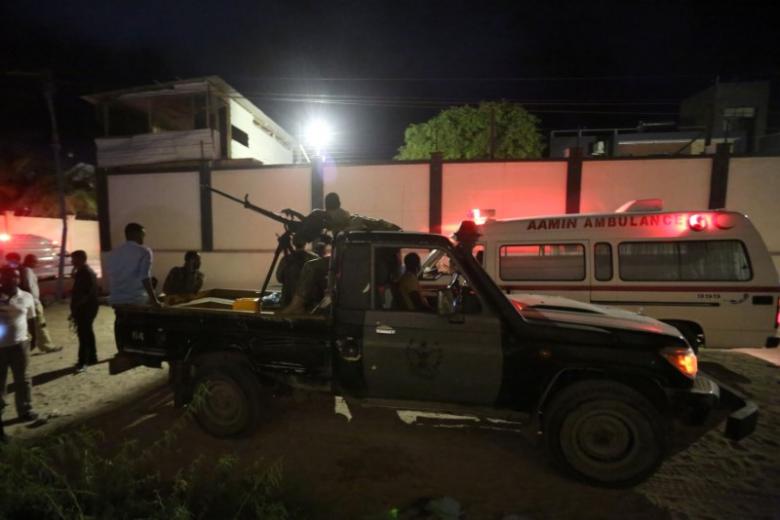 MOGADISHU, June 15: At least 19 people were killed when Islamist militants launched a car bomb and gun attack on a busy hotel and adjacent restaurant in the Somali capital, a police officer said on Thursday.

A car driven by a suicide bomber rammed into the Posh Hotel in south Mogadishu on Wednesday evening before gunmen rushed into Pizza House, an adjacent restaurant, and took 20 people hostage. Posh Hotel is the only venue with a discotheque in the capital.

District police chief Abdi Bashir told Reuters Somali security forces took back control of the restaurant at midnight after the gunmen had held hostages inside for several hours. Five of the gunmen were killed, Bashir said.

"We are in control of the hotel but it was mostly destroyed by the suicide bomber," he told Reuters by phone.

Witnesses said there were bodies lying at the scene on Thursday morning as ambulances came to take them away.

Another 27 civilians were taken to hospital with various injuries, ambulance services said. Witnesses said the attack was launched after the Iftar dinner for customers who are fasting for Ramadan. Most of them were still inside relaxing.

The wreckage of three-wheeled scooters caught up in the blast at the hotel, which also housed a massage parlour, lay overturned around the scene.

Al Shabaab, the Islamist militant group, claimed responsibility for the attack. The group claimed on Thursday morning it killed more than 20 people including soldiers and government workers.

Al Shabaab usually provides a higher death toll from its attacks than the government's figures.

The group has carried out a campaign of suicide bombings in its bid to topple the Somali government and impose its strict interpretation of Islam.

Since losing large swathes of territory to African Union peacekeepers supporting the government, the group has frequently launched raids and deadly attacks in Mogadishu and other regions controlled by the federal government.

The Horn of Africa country has been racked by armed conflict since 1991, when clan-based warlords overthrew dictator Siad Barre and then turned on each other.

MOGADISHU, July 14: Islamic extremists blew up the gate of a Somali hotel with a car bomb and took over the... Read More...

At least 28 killed in ambush attack on Christians in Egypt

CAIRO, May 27: Masked gunmen ambushed a bus carrying Coptic Christians to a monastery south of Cairo on Friday, killing at... Read More...

Gold price increases by Rs 500 per tola
38 minutes ago