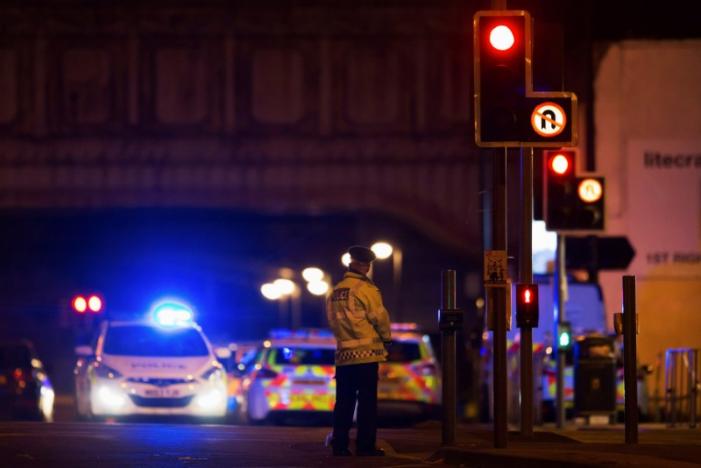 MANCHESTER, May 23: At least 22 people, including some children, were killed and 59 were wounded when a suicide bomber struck as thousands of fans streamed out of a concert by U.S. singer Ariana Grande in the English city of Manchester on Monday.

Prime Minister Theresa May called an emergency meeting with intelligence chiefs on the deadliest militant assault in Britain since four British Muslims killed 52 people in suicide bombings on London's transport system in July 2005.

Witnesses related the horror of the blast which prompted a stampede just as the concert ended at Europe's largest indoor arena.

"We ran and people were screaming around us and pushing on the stairs to go outside and people were falling down, girls were crying, and we saw these women being treated by paramedics having open wounds on their legs ... it was just chaos," said Sebastian Diaz, 19.

"It was literally just a minute after it ended, the lights came on and the bomb went off," Diaz said.

U.S. President Donald Trump described the attack as the work of "evil losers". German Chancellor Angela Merkel said it "will only strengthen our resolve to...work together with our British friends against those who plan and carry out such inhumane deeds."

Police said the attacker detonated the explosives shortly after 10:33 pm at Manchester Arena, which has the capacity to hold 21,000 people. Children were among the dead, police said.

"We believe, at this stage, the attack last night was conducted by one man," Manchester Chief Constable Ian Hopkins told reporters. "The priority is to establish whether he was acting alone or as part of a network.

He declined to answer questions on the bomber's identity.

London Mayor Sadiq Khan said more police had been ordered onto the streets of the British capital. London's Victoria coach station was briefly closed after discovery of a suspect package.

A source with knowledge of the situation said the bomber's explosives were packed with metal and bolts. At least 19 of those wounded were in a critical condition, the source said.

A video posted on Twitter showed fans, many of them young, screaming and running from the venue. Dozens of parents frantically searched for their children, posting photos and pleading for information on social media.