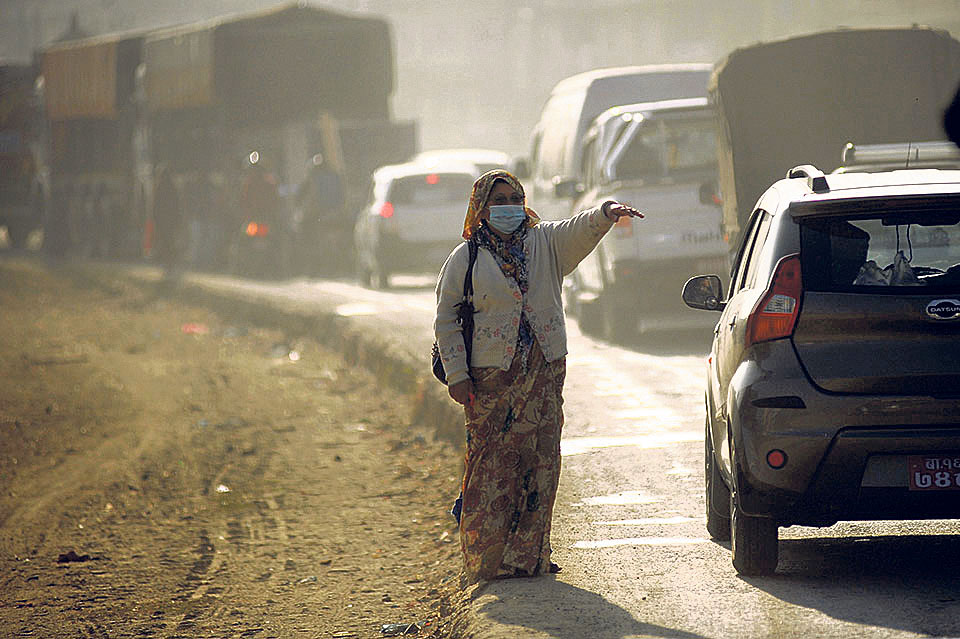 While city-level disaggregated data on the effect of pollution does not exist, it is reasonable to predict that polluted cities such as Kathmandu will be a major culprit of pollution-induced mortality

Kathmandu is becoming unlivable because of the seething air pollution. Photos of people wearing masks battling vehicle exhausts and dust often make up to the front page of national dailies. Air pollution has exacerbated and contributed to pulmonary diseases and deaths. It has affected tourism, stultified road-side businesses, and hollowed out the city’s GDP. The harmful pollution contributors such as CO2, N2O and SO2, which trap heat, are also contributing to the melting of glaciers that are at stone’s throw away from the valley.

The sorry state of Kathmandu was decades in the making. The centralization of government institutions and assets attracted thousands of people every year. On average, Kathmandu added 400,000 people per decade since 2000, fueling the construction of new buildings and infrastructure to accommodate the growing population. With per capita income more than twice the country’s average, Kathmandu still attracts people despite decentralization.

Rising pollutants
The Bagmati zone, where Kathmandu is, saw a three-fold increase in the number of registered vehicles between 2006/07 and 2016/17. As per the Department of Transport Management, the Bagmati zone has always had more vehicle registration than any other zones in Nepal. The total number of vehicles that were registered in 2016/17 was 119,956 among which 94, 751 were motorcycles, and 23, 178 were four-wheeled vehicles such as bus, mini-truck or car. Almost all of these vehicles run on fossil fuels such as diesel and petrol. During traffic congestions, the particulate matter emission shoots up, sometimes 20 times the WHO’s upper limit. In recent years, dusty roads, construction, and brick kilns have been the sources of air pollution. The geography of the valley is also of not much help in dispersing pollution because of its bowl-like topography which traps smog and pollutants.

In 2016, about nine thousand people died in Kathmandu alone from poor air quality causes, triple the death figure in 2012. According to the WHO, air pollution vitiates diseases such as stroke, heart attack, lung cancer, and both chronic and acute respiratory diseases, including asthma, and killed 76 in every 100 thousand Nepalese in 2016. These noncommunicable diseases mostly affect sensitive groups such as children and elderly people, who may suffer from severe respiratory disorders with even a moderate level of air pollution. A 2018 research project found a correlation between increasing PM2.5 level and the number of hospitalizations in Kathmandu. A 2012 research predicted that outdoor air pollution would kill 24,000 people by 2030. While city-level disaggregated data on the effect of pollution does not exist, it is reasonable to predict that polluted cities such as Kathmandu will be a major culprit of pollution-induced mortality.

To track pollution levels in the city, the US embassy installed two Air Quality Monitors (AQMs) in 2017. Ever since these machines have churned valuable data on an hourly basis that have helped highlight the grim pollution levels in the valley. The AQMs detect the concentration of particulate matter and rates them on a scale from 0 to 1000 and even beyond in some cases. The lower the numbers on the monitors, the better the state of the air. Basing upon the pollutant concentration, the air quality falls into one of these categories: “good,” “moderate,” “unhealthy for sensitive groups,” “unhealthy” and “hazardous.” As per our analysis that we conducted using AQMs data at SEED, a research group at Soka University, we found that people of Kathmandu spent 53 percent of reported hours—every other hour—of 2019 in conditions that were “unhealthy for sensitive groups” or worse. On some days, Kathmandu’s air pollution level reached the hazardous zone.

The higher pollution in January (Poush-Magh) is attributable to the atmospheric phenomenon called winter inversion. Unlike in summer, the ground air in winter is cold, stiff, and stagnant and does not waft up to the upper level of the atmosphere. These dynamics prevent particulate matters and dust to disperse. Complicated by its topography, Kathmandu witnesses a smog-filled January.

The winter inversion is a global phenomenon that spikes pollution level everywhere. In New Delhi, India’s capital city, the winter inversion retains both the local pollution from vehicles and industries and foreign pollution resulting from crop-burning in Punjab and Haryana, throwing monitors to continuous schizophrenic beeping. In Nepal, further studies to isolate possible other factors for the January spike, besides the winter inversion phenomenon, can help policymakers to devise focused policy solutions.

What can be done?
In the interim with evidence at hand, we can devise seasonal policies to fight against pollution. For example, odd-and-even vehicle policy can control the level of vehicular exhausts that otherwise enjoy inertia during January. Similarly, a set of concerted policy options can also help bring down the general pollution level throughout the year. For example, catalytic converters can help reduce the exhaust from old-battered vehicles. Depending upon their quality, catalytic converters are capable of preventing 90 percent of emissions. They can be mounted on the existing vehicular structure and on average cost 121.3 USD per unit (around 13, 000 Nepali rupees). A government subsidy can assist low-income drivers to install this technology.

In the medium and long-term, the government should tax fossil-fuel-powered vehicles. The government data inform us that the import of fossil fuels, especially petrol and diesel, has increased exponentially over the last five years, adding on average 13,520 liters every month to the Nepalese account between 2008/9 and 2017/18. The government has not embraced clean energy policies and must be deliberate in creating discriminatory policies that favor the import of clean public vehicles. Under the business-as-usual framework, vehicles only cover wear and tear of the road and do not incorporate negative externality costs. This tax policy is expected to discourage the purchase of future fossil-fuel-powered vehicles and reduce the consumption of fossil fuels that contribute to emissions and pollution.

To change the consumer’s behavior on transportation, the government should provide subsidies or tax waivers to the owners of prospective “green” public vehicles so that they lower the bus fares. This step could motivate other vehicle owners to switch to electric vehicles, thereby leading to more green public vehicles on the streets. Since Nepal has the potential to produce a high amount of electricity through hydropower plants and many are already under construction as we write, the air pollution problem can be made “temporary” if right laws, right policies, and green infrastructure such as charging stations are set up to welcome the clean energy.

Gupta and Tanaka are students of economics at Soka University, California

KATHMANDU, Feb 25: Myrepublica.com is launching a short video on air pollution in Kathmandu valley to show how it is affecting... Read More...