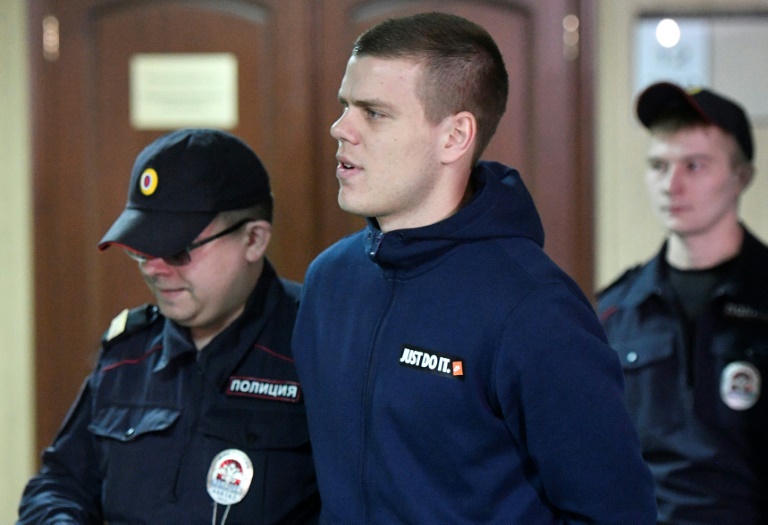 MOSCOW, April 9: The trial of Russian footballers Pavel Mamaev and Alexander Kokorin began in Moscow Tuesday, six months after their drunken night out in the Russian capital ended in assault charges.

Mamaev, a midfielder for Krasnodar, and Zenit Saint Petersburg forward Kokorin -- as well as two other defendants, including Kokorin's younger brother -- have been held in Moscow's Butyrka prison since October.

Russian media on Tuesday aired footage of the four handcuffed men rushed from a police van to the Presnensky court, where the hearing is taking place.

According to the Russian press, the trial could last up to two months.

In October the pair attacked the driver of a television host, damaging her Mercedes. She was hospitalised with injuries.

They were then caught on video attacking two Russian trade ministry officials in an upscale cafe, hitting one, an ethnic Korean, with a chair while referring to his Asian appearance.

Several days later, they were ordered to be detained pending trial for "hooliganism."

Both are Russian internationals though Kokorin last played for the national side in late 2017, while Mamaev was last selected in 2016.

The attacks caused outrage in Russia, especially as Mamaev and Kokorin have been in trouble before after partying.

The Russian Football Union suspended the pair in July 2016 after a video emerged from a Monte Carlo nightclub in which Mamaev and Kokorin allegedly spent $296,000 (258,000 euros) on a champagne-fuelled party following Euro 2016, where Russia flopped.

Earlier this month, a court again extended their detention until September 25.

But the severity of the Russian justice system -- all theire requests to be granted bail have been rejected -- has angered some.

MOSCOW, April 13: Russia’s lower house of parliament is to consider draft legislation that would give the Kremlin powers to... Read More...