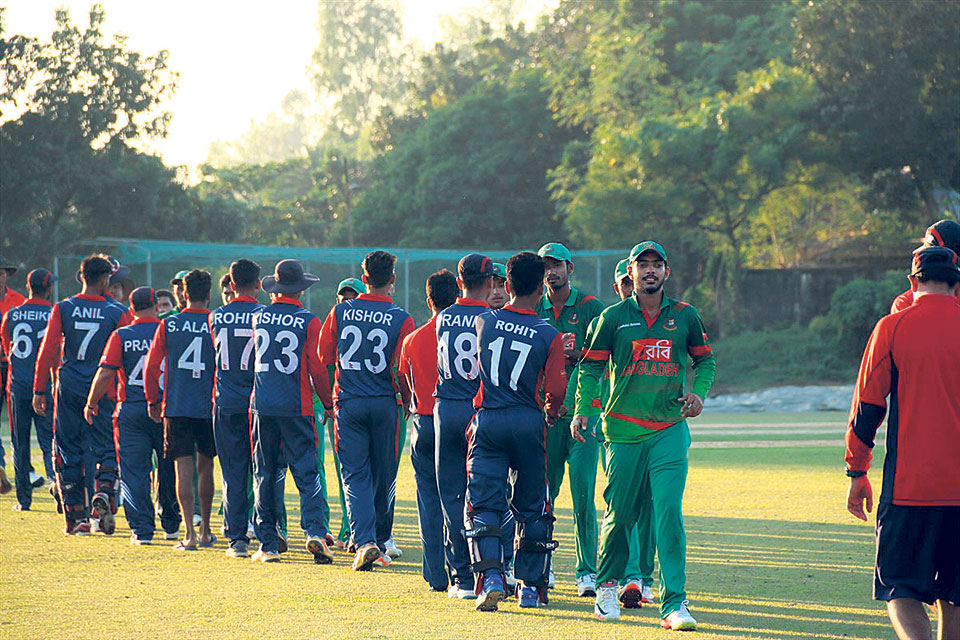 KATHMANDU, Nov 6: Nepal U-19 cricket team has wrapped up the Bangladesh tour with an impressive six wickets win over the home team on Sunday.

Nepali young team which travelled to Bangladesh as part of the upcoming ACC U-19 Asia Cup preparations had suffered defeats in first two practice matches.

Opening batsman Mahamad Asif Sheikh was a star-man in Nepal’s win over Tigers as he smashed 88-ball 90.

In the third and final practice match played at Bangladesh Krira Shikkha Prothisthan Ground, Dhaka, the home team won the toss and chose batting before making 225-7 in allotted 50 overs.
In reply, Nepal reached 229-4 in 46.3 overs with the help of improved performances from the batsmen.

Nepali head coach Binod Das had decided to change the opening partnership with Jitendra Singh coming to the side to partner Asif which eventually paid off.

Asif and Jitendra built a 139-run partnership for the first wicket. Asif’s impressive 90 runs consisted of three sixes and nine boundaries while Jitendra’s 109-ball 45 included one six and three boundaries.

Earlier, Tigers made moderate start to the innings with opening batsmen Sojib Hossain and Pinak Ghosh creating just a 15-run partnership for the first wicket.

Shahab Alam was pick of the Nepali bowling as he claimed three wickets and he was supported by Anil Kumar Sah who bagged two wickets. Likewise, skipper Dipendra Singh Airee added one wicket for the winning team.

Nepali team will return on Monday.

Jolly Amatya, a Nepali youth from Lalitpur, who has been currently living in Washington DC, has been appointed as the... Read More...