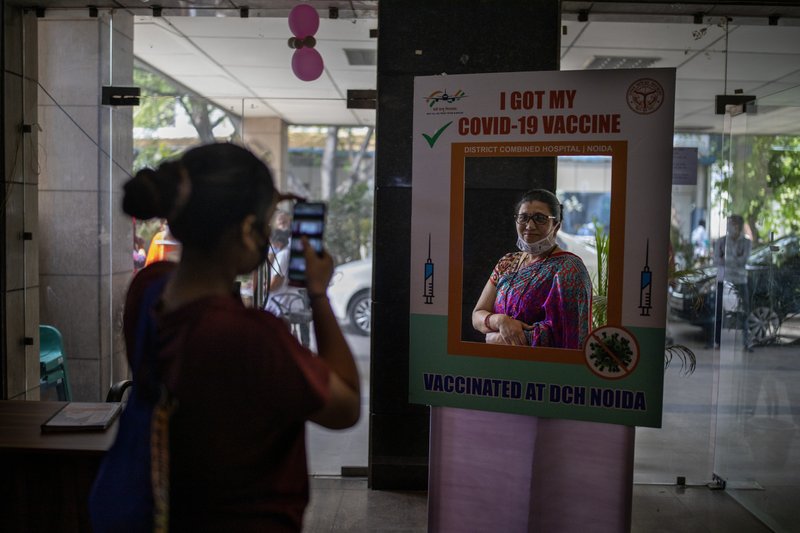 A woman poses for a photograph behind a cutout after receiving a COVID- 19 vaccine at a government hospital in Noida, a suburb of New Delhi, India, Wednesday, April 7, 2021. India hits another new peak with 115,736 coronavirus cases reported in the past 24 hours with New Delhi, Mumbai and dozens of other cities imposing night curfews to check the soaring infections. (AP Photo/Altaf Qadri)

NEW DELHI, April 8: India’s prime minister received his second dose of the COVID-19 vaccine as the country hit another peak Thursday with 126,789 new cases reported in the past 24 hours.

“Vaccination is among the few ways we have, to defeat the virus. If you are eligible for the vaccine, get your shot soon,” Prime Minister Narendra Modi tweeted. He received his first vaccine shot on March 1.

India started its vaccination drive in January. So far, more than 90 million health workers and Indians older than 45 have received at least one shot. Only 11 million of them have received both doses as India tries to build immunity to protect its nearly 1.4 billion people.

The new cases reported by the Health Ministry overtook Wednesday’s 115,736 infections with dozens of cities and towns imposing night curfews to try to contain infections.

Fatalities rose by 685 in the past 24 hours, the highest since November, raising the nation’s toll to 166,862 dead since the pandemic began.

The western state of Maharashtra, the worst hit in the country, accounted for nearly 47% of new infections.

The federal government has refused to impose a second nationwide lockdown, after the first last year had a steep economic impact, but it has asked states to decide on imposing local restrictions to contain the spread of the virus.

India now has a seven-day rolling average of more than 80,000 cases per day and has reported 12.9 million virus cases since the pandemic began, the third-highest total after the United States and Brazil.

India launches biggest vaccination drive yet against a surging coronavirus

NEW DELHI, April 1:  India began vaccinating tens of thousands of people above the age of 45 on Thursday in its... Read More...