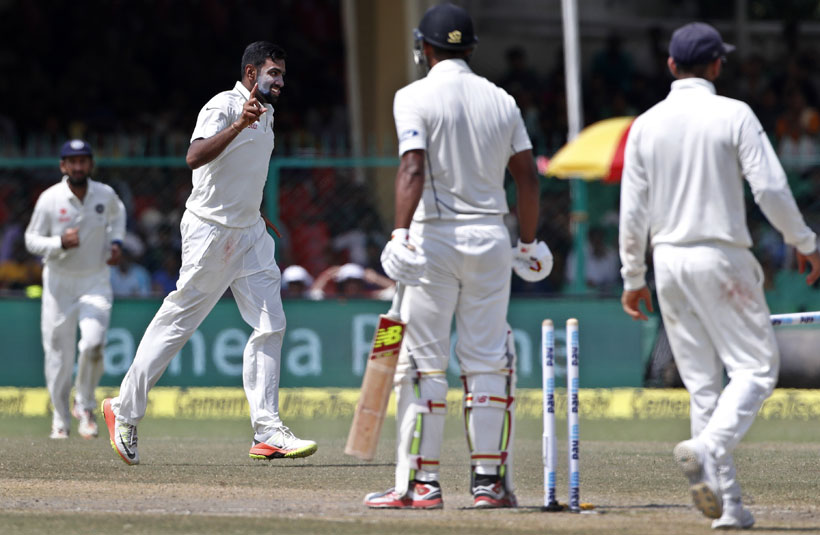 Ashwin claimed six wickets as the visitors, who resumed the day on on 93 for four in pursuit of their unlikely 434-run target, were dismissed for 236 shortly after lunch at Kanpur's Green Park.

Ashwin, who recorded his 19th five-wicket haul in Tests, and Jadeja shared 16 wickets between them in the match to flatten the New Zealand batting line-up.

And it was Ashwin who triggered the celebrations in the Indian camp by taking the last wicket, dismissing the lanky off-spinner Neil Wagner lbw for nought to end with overall match figures of 10-225.

Man of the match Jadeja, who registered a five-wicket haul in the first innings, also contributed with unbeaten scores of 42 and 50 in the first and second innings respectively.

"It's a memorable Test, it's been a very good Test," skipper Virat Kohli said after India became the fourth team to complete 500 Tests. England, Australia and the West Indies had already managed the feat.

"From the second day onwards when New Zealand were batting really well, I and Ashwin were chatting how we had to show good resilience to win it.

"The boys have applied themselves really well. Few moments we were in a spot of bother... But Jadeja and Ashwin (who scored 42) batted really well in the first innings... Makes a psychological difference," said Kohli.

A 102-run partnership between overnight batsmen Luke Ronchi and Mitchell Santner helped New Zealand put up some resistance in the first hour of play. Ronchi's fighting 80 was laced with nine fours and a six.

But left-arm spinner Jadeja managed to break their stand when Ronchi mistimed a flatter delivery and was caught at point by Ashwin.

Santner, whose valiant 71 included seven fours and two sixes, was snared by Ashwin shortly after lunch when he fell to a virtually unplayable delivery.

The ball pitched well outside the leg-stump and turned and bounced to take the left-handed Santner by surprise as he edged the ball to point.

"The way Santner applied himself with bat and ball and the way Ronchi played coming back into the team was fantastic," said Williamson.

Ashwin claimed three wickets on Sunday to reduce New Zealand to 56 for four at one stage, after getting openers Martin Guptill and Tom Latham in quick succession.

- Ashwin joins 200 club -
Ashwin also had skipper Kane Williamson, who top-scored with 75 in the first innings, dismissed lbw to claim his 200th Test wicket on the fourth day to give India a firm grip.

India declared their second innings on 377 for five at tea on the fourth day with Rohit Sharma and Jadeja putting on a 100-run unbeaten partnership for the sixth wicket.

Cheteshwar Pujara top-scored for the hosts with 78 and his 133-run second-wicket partnership with Murali Vijay (76) was the highlight of India's second innings.

Ashwin and Jadeja had given India the advantage on the third day after bowling out New Zealand for 262 in response to India's first-innings 318.

"India outplayed us though and if we look back there was a two-session period where the game slipped away from us," said Williamson.

"It would have been nice to get closer to the first innings total, and to start off restricting India to 300 on a good batting wicket was good work."

Prithvi Highway resumes after 11 hours of disruption
2 minutes ago