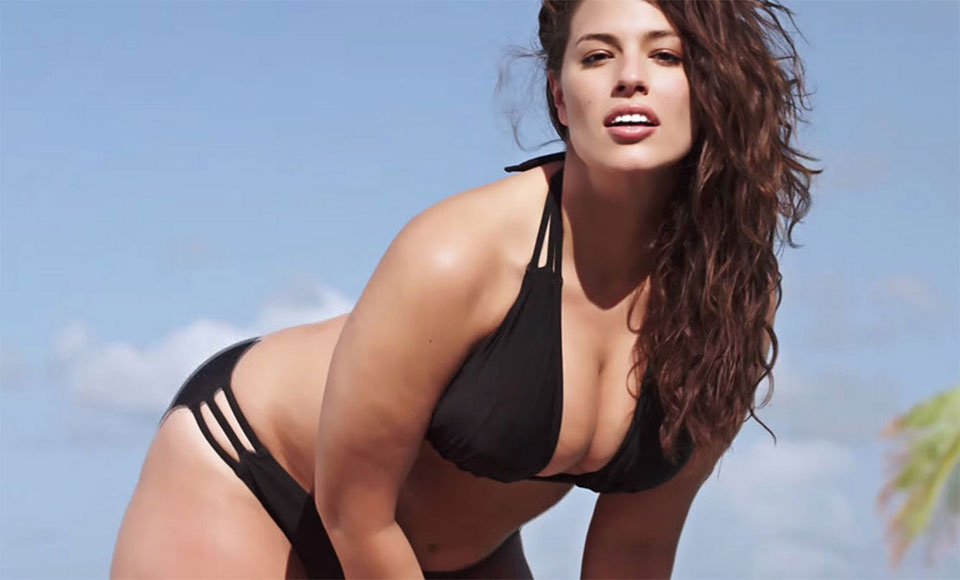 In a slow-motion video, the 30-year-old plus size model could first be seen wearing her iconic white swimsuit which barely held in her nipples as she seductively walked toward a swimming pool in Morocco.

The shot swiftly changed to her mother Linda, 53, who gave viewers a glimpse of her cleavage in a low-cut swimsuit.

Ashley and her mother were then seen enjoying a laugh together as they wore matching bikinis during relaxation time at a spa.

The brunette was later captured giving onlookers a full view of her curvy physique as she spun around in leopard print swimwear shot from a low angle.

The pair gave fans a glimpse of their shapely pins and desirable figures as they enjoyed a camel ride on the beach.

In the clip, Ashley also slipped into a mismatched bikini as she posed confidently in front of the sea and gave a seductive look to the camera.

The catwalk favorite teased viewers by rolling her hands up her chest before she played with her brunette hair as it blew in the wind.

A further shot showed the star flashing her peachy derrière as she strolled along the sunny location hand-in-hand with her mother.

Ashley's mother seemed to take tips from her inspirational daughter as she spun around confidently wearing a cut-out black bikini.

The cute video included a heartfelt message from Ashley’s mother, who praised her “confident” and "courageous” only child.

She could be heard saying: “Dear Ashley, before you were a model, an icon, a personality, you were my little girl.

Learn to love yourself: Ashley Graham advice to young women