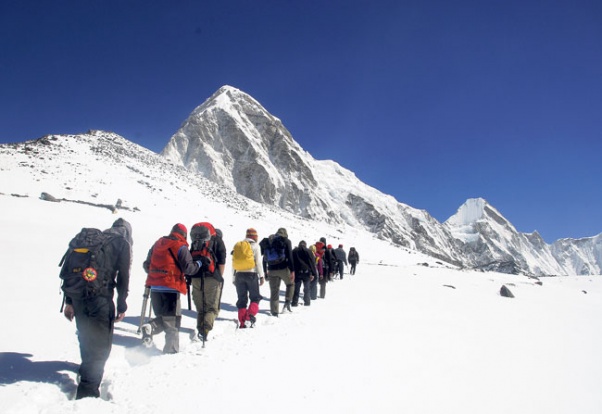 KATHMANDU, May 4: As Cyclone Fani was making landfall in India, hundreds of climbers heading up Everest and other mountains for acclimatization have descended to base camp.

Climbers and high-altitude Sherpas who have descended to Everest Base Camp from higher camps said most expedition team members have already returned to base after encountering high winds.
Climbers work their way up to higher camps for acclimatization before making their final summit bids.

“High winds made remaining at the higher camps risky. Most climbers and Sherpas have now come back to base camp,” said Tshering Jangbu Sherpa, a guide from the Everest region.

Worried over the possible disaster in the Himalayas, the Department of Tourism Management (DoTM) has urged expedition companies to move their climber clients to safer spots. They are being urged to take all possible measures to keep the climbers safe and supplied with timely and credible information.

Adverse weather in the Everest region has affected the ongoing Everest cleanup campaign as well. And Sherpas have stopped putting up tents at the higher camps.

“The government has not allowed helicopter flights to base camp. Even the Sherpas are unable to reach the higher camps due to the extreme weather,” said Tikaram Gurung, secretary of Nepal Mountaineering Association. Some tents set up at Camp 2 were damaged by high winds, he said.
The Ministry of Home Affairs has asked helicopter operators not to conduct helicopter flights to the mountains till Sunday as they could be hit by weather and snowfall.

Hundreds of climbers, expedition company staff, government officials and security personnel have reached the Everest region to oversee the expeditions to Everest, Lhotse, Nuptse, Pumori and other peaks.

“Some climbers at Camp 2 have descended to escape the bad weather,” said Mira Acharya, director at DoTM, adding, “Things are now normal at base camp but expeditions are being told to remain on full alert for a few days.”

Officials said all climbers and support staff are safe so far.

Weather experts have warned of heavy snowfall and storms in the Himalayas and light to moderate rain in the hills and plains due to the cyclone. The weather in Nepal is expected to remain disturbed until Saturday.

A partial impact of the cyclone off India was experienced in the eastern and southern plains Friday and domestic flights in the mountain regions were canceled for the day.
In some tarai areas, schools were shut for safety reasons.

Few things are more exciting than traveling internationally. When going abroad, you get to experience all the beautiful cultures that... Read More...