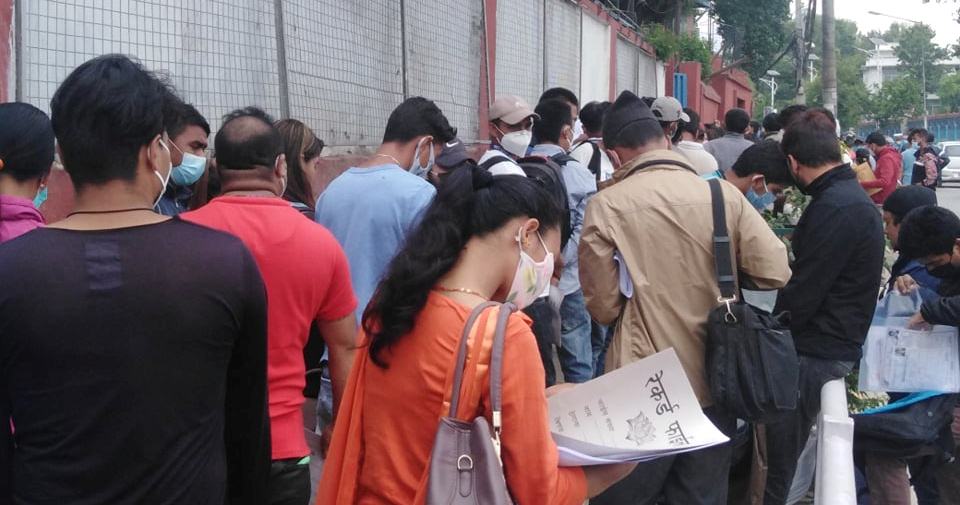 KATHMANDU, June 29: Last week Kathmandu Upatyaka Khanepani Limited (KUKL) office announced vacancies for several posts. Ever since the vacancies were announced, the head office in Tripureshwor has been receiving hordes of applicants forming a queue outside the office. Most of them are seen completely defying social distancing measures. The scene with hundreds of people packed in a narrow row looks frightening given that we’re in the middle of a pandemic where social distancing measures are crucial for preventing the spread of the contagious virus.

Nevertheless, the KUKL office as well as the applicants have been defying all the safety precautions overlooking the threat of the pandemic. 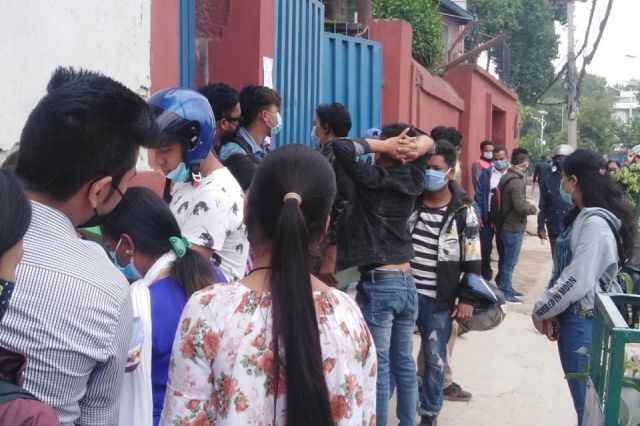 According to Prakash Rai, spokesperson for KUKL, the office has tried to take full safety precautions inside the office premises to avoid the possible transmission of the virus. “We have deployed few security personnel in order to direct people to follow sanitary guidelines and have marked spots on the floor where the applicants can stand, maintaining social distance, “he said.

Rai said that following the sanitation protocols, the security officials are geared with PPEs to avoid the transmission and the applicants are checked with infrared thermometers before they are allowed to enter the premises. Anyone found with suspicious body temperatures is not allowed to get inside, according to Rai.

However, the situation on the spot is completely different from what Rai described. Although the security personnel are seen doing their job, most of the applicants ignore their calls often forgetting that we’re still battling to curb a pandemic that requires social distancing as one of the main precautions.

The applicants waiting outside the office are seen forming a long queue, failing to maintain a distance of 1 meter between every two applicants. The queue seems so long and densely packed that it surprises anyone passing by. On Sunday, the queue had more than 100 people lined up from the KUKL office gate to the World Trade Center in Thapathali. Only a few people were trying to maintain a distance while most of them completely ignored Covid-19 safety guidelines as if the spread of the virus is no more a threat.

Stating that the nation is in a critical phase, virologists have long been stressing the need for maintaining social distancing as the primary way of preventing the spread of the virus.

The number of Covid-19 cases has rather been increasing after the ease in the nationwide lockdown that lasted for more than 3 months. As of Monday, over 12,700 cases have been reported with 28 deaths and the numbers are increasing fast. However, both the authorities and the general public seem to overlook the threat.

The World Health Organization’s guidelines on COVID-19 for the public mention that it is mandatory to maintain at least one meter (3 feet) distance between yourself and others while exposing yourself in public areas. “When someone coughs, sneezes, or speaks they spray small droplets from their nose or mouth which may contain the virus. If you are too close, you can breathe in the droplets, including the COVID-19 virus if the person has the disease,” the advice explains.

KUKL has announced vacancies for five different posts - light vehicle driver, assistant pump operator, meter reader, helper, key operator, and office helper. As of Sunday, over 2,000 people have submitted their applications for 90 vacant positions, with more than 300 people applying on a single day.

Pantha with his friend Jiwan Karki had to wait in the queue for more than two hours. “We have already stayed in the line for two hours but we might have to stay even longer as the process of submitting applications isn’t moving quickly,” Karki told Republica on Sunday.

Will Covid-19 make us humane?

There were a very few vehicles on the road. I flew on I-93 and reached Boston downtown in no time.... Read More...

Do I need to take precautions at hotels if I’m vaccinated?

Most people won’t need to, but it depends on your situation. The U.S. Centers for Disease Control and Prevention says... Read More...