As a child, Rochelle Tuladhar, now 23 years old, dreamt of becoming a nurse. However, when she received a big box of color pencils as a birthday gift, her plans took another turn. From making colorful scribbles as a child to coming up with fun and quirky illustrations as a graphic designer and illustrator, Tuladhar has certainly come a long way.

Tuladhar was born in Ason in the heart of Kathmandu and she reckons that her attention to details might have been subconsciously triggered by this very fact. Her illustrations are themed on surrealism, a form of art that ‘sought to release the creative potential of the unconscious mind, for example by the irrational juxtaposition of images.’ She further experimented with surrealism in a book she illustrated called ‘The Ethereal’, is which a story about the relationship between a grandmother and granddaughter and the way the granddaughter deals with her grandmother’s battle with cancer. 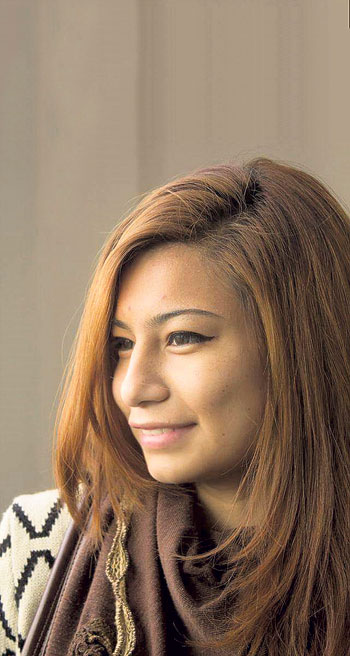 Rather than putting it into words, Tuladhar has chosen to put out dream like illustrations through the granddaughter’s eyes, touching something real and, at the same time, deriving inspiration from fantasy. Her inspiration to publish this book comes from her own experience of dealing with her beloved grandmother who also battled cancer.

“I wanted to illustrate this book for her as a way of showing my love,” she says. According to Tuladhar, she was able to express her unspoken feelings and emotions through her illustrations and it helped her find calm when things weren’t as good as she would have liked them to be.

According to Tuladhar, she can remember each and every dream she has ever had and can remember them for a long time. “Most illustrations I did as a project were mainly based on all these eccentric, surreal dreams I had,” she says adding that this very fascination with dreams is what makes her art something unique and personal to her.

Tuladhar was also drawn into surrealism by coming across the works of artist John Kenn who draws these ‘monsters and fantasy’ featured art pieces on sticky-notes that intimidates and excites one at the same. It was from the same artist that she got the idea of working on dark yet calming illustrations for her book and other artworks. Today, her illustrations look like they are straight out of Hayao Miyazaki’s animation works.

Tuladhar says that she was drawn to the idea of illustrating the book rather than writing it as, for her, pictures have been more fascinating and easy to understand and appreciate. “I can also express many ideas and emotions through a picture and readers will not be confused as to what I want to say as it might be the case with a piece of writing,” she explains.

The creative process for Tuladhar starts when she draws something by hand on paper. After that, if she likes the idea she digitalizes it by scanning the image and then adds the colors and other effects with the help of photoshop. “Drawing on a paper and on a screen is essentially the same – the art remains the same, only the medium is different,” she says adding that because of her background in graphic designing she enjoys both equally and can’t choose between the two.

Tuladhar has completed her bachelor’s degree in graphic designing from Kathmandu University and now works as a freelance graphic designer. She has also sent her artworks to brands like ‘Alchi’ and ‘Little Things’ and it is at these places that her artworks are printed on usable mediums like cups and notebooks. She plans to do her master’s in animations and further refine her illustration skills and publish other books, in the genres of fantasy, horror, and mystery. 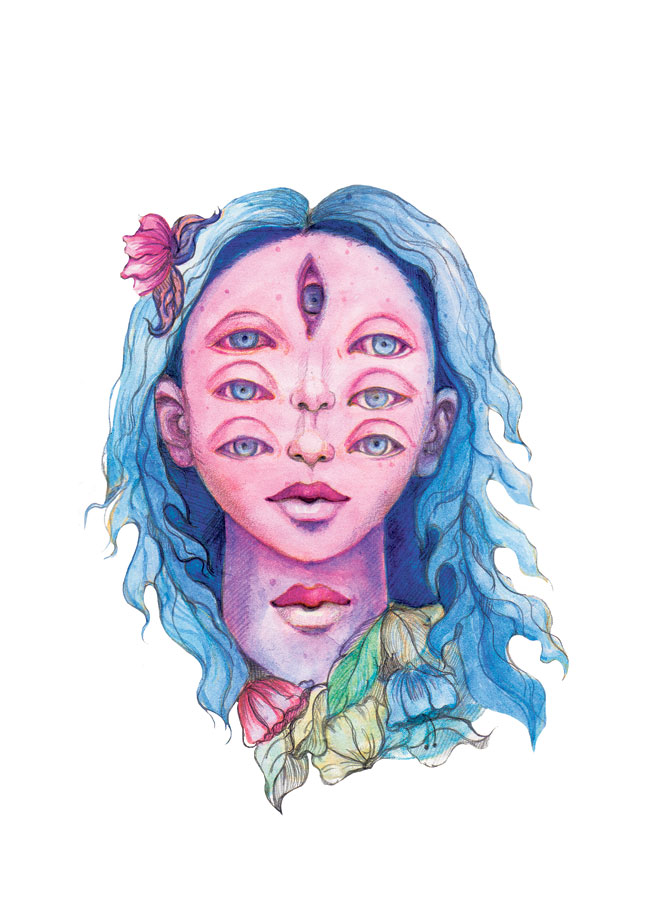 Tuladhar claims that she is quite shy and not very social and that’s why she likes to showcase her thoughts through drawings rather than words. However, she says that she has yet to find her place when it comes to art and that she is still in the process of figuring things out. But one thing she is sure of: she wants to experiment with different forms of graphic illustrations and not be confined to any particular type and she also hopes to do meaningful work.

Moreover, Tuladhar also loves experimenting with portraits and she tries to incorporate nature and illusion, creating an eerily soothing vibe. The main idea of her artwork is to bridge the gap between the real and surreal by adding a certain features or giving it a ‘fantasy’ touch. So, it doesn’t come as a surprise when she claims ‘Inception’ by Christopher Nolan, a film experimenting with dreams, layers and surrealism, to be one of her favorite films and says it gave her the confidence to put her art and experiments out for others to see.

But there’s still a long way for her to map out. Tuladhar says that art is still an unconventional career choice in our society and initially even her family was skeptical of letting her pursue this field. But after seeing her passion for art and realizing she was obviously talented at it, her mother was the one to give her a nudge in the right direction.

“And ever since then, it’s been easier to trust my creativity and be confident in what I do,” she concludes.