Art to her rescue 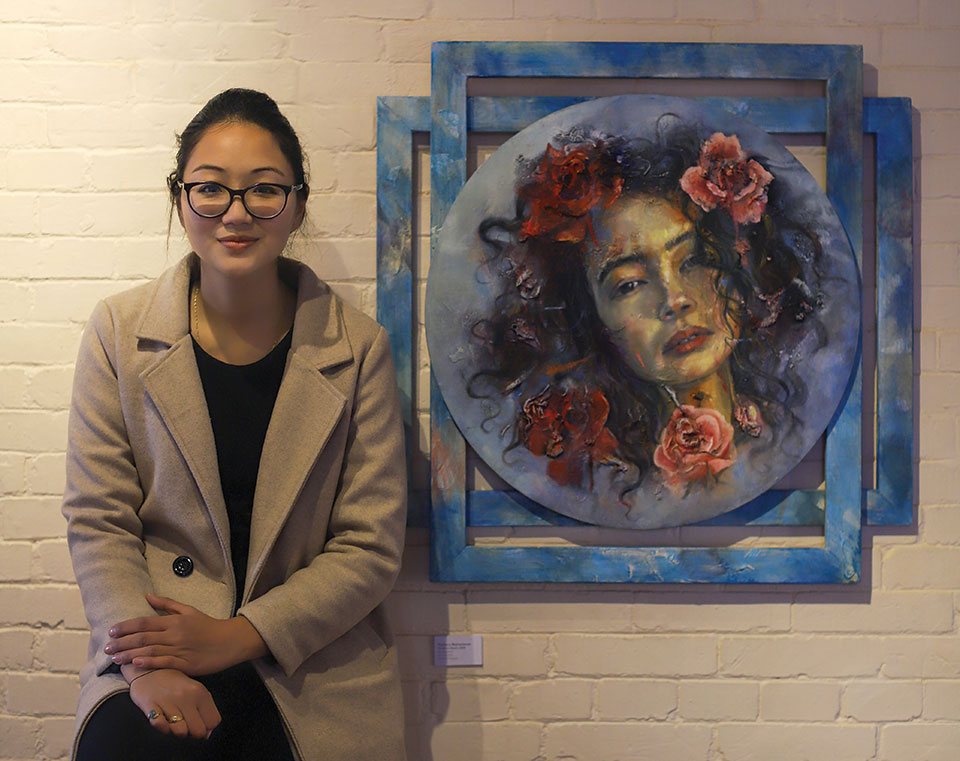 Art has been a part of Rashana Bajracharya’s life since she was a toddler. Now a freelance illustrator, visual artist and a designer at the Supreme Court, Bajracharya is a well-known name in the Nepali art scene. And Bajracharya claims that she sees art as more than just her career.

Bajracharya mentions that art has helped her grow as a person. As a child she usually had trouble opening up and getting close to people but once she took to someone, she would become very attached to the person. Both Bajracharya and her sister grew up with their grandmother till they were five years old. But then her parents took them to live with them instead and being away from her grandmother’s home—that was more familiar to her than her parent’s house at the time—was very difficult for her and it made her uneasy. She resorted to playing and scribbling with colors to ease and relax her mind.

Quickly, Bajracharya grew attached to colors and creating art and by the time she joined middle school, she was already a child prodigy of sorts when it came to arts. But she is also dyselexic. So, she always had difficulty learning and studying when she was in school. She mentions that she still has problems when she is reading as she finds it difficult to focus on written words in general.

“Although I barely passed other classes, I always won all sorts of competitions, medals and got full scores when it came to arts,” says Bajracharya.

After she completed high school, Bajracharya’s parents wanted her to study aviation and become a pilot. Although they appreciated her artistic abilities, they wanted her to study a subject that would make it easier for her to find a well-paying job. And they also thought since she was naturally good at arts, she needn’t study the subject if she were only thinking of pursuing it as a hobby. Bajracharya even attended a few prep classes for the aviation course but she soon realized that she couldn’t pursue it because she could barely understand anything in the classes.

Bajracharya quit these classes and joined Srijana College of Fine Arts to study arts in depth. During her undergraduate years, she was one of the star students of the college who would always rank first in the exams. This was a big change, for in high school she wasn’t really a good student.

Bajracharya says that the first few times this happened all of it felt very surreal to her. She even ranked first Nepal-wide at the board exams and was awarded a gold medal. Joining Srijana College of Fine Arts also helped her develop confidence in herself and her artwork.

“I was always the odd ball in school. The one who was horrible in studies but great at art. The one who could barely make out words but had an elaborate imaginative world of her own inside her head,” she says adding that she found people whose mind worked just like hers did during her bachelor’s and this made her feel more accepted and not like a misfit anymore.

Her breakthrough into the world of arts professionally happened when a piece she created titled ‘The Rapist’ was noticed by art enthusiasts and even showcased at an exhibition. After that, she started getting a lot of work offers. During her final year of bachelor’s, Bajracharya also took the Lok Sewa exams after learning about the vacancy for the post of a designer at the Supreme Court and that is where she has been working as a full-time employee for over six years now.

Even though her day job (at the Supreme Court) takes up a lot of her time every day—compelling her to only attend to personal creative pursuits at night—Bajracharya is pretty grateful that she has a stable source of income. She says that after seeing so many of her friends struggle to make a living out of arts, she has learned that it is still difficult to survive in Nepal if you are pursuing an unconventional or a creative career.

She remembers that even during her college years, most of her professors would advise the students to paint beautiful things as these would sell out quicker and for higher prices. But as Bajracharya has been utilizing her creations to express things and emotions she has difficulty voicing out, most of her artworks depict pain.

But because most people related to and liked Bajracharya’s creations, she discerned that pain is the most powerful emotion in the world as everyone has felt it in some form at least once in their lives. She still does use her professors’ tip about painting beautiful things though because she believes visually beautiful things catch people’s attention quickly and intensely. But instead of letting her paintings just be beautiful, she always incorporates some kind of social issue into it—making the viewers and observers analyze these paintings for hours and create their own narrative about it.

A common theme in a lot of Bajracharya’s creations is that she mixes a bit of reality with her own imagination to create the artwork. A lot of her pieces also feature prominent, emotive and realistic eyes and she reveals that she intentionally makes the eyes the focal point of her art. She feels that emotive eyes are generally very compelling and helps the viewer connect to her art on a personal level.

Usually, she starts a new piece by working on the eyes first. “After that, my art tells me what to do and when to stop. I communicate with my pieces when I’m working on them and this helps me focus on my work better,” says Bajracharya.

As she is someone who is largely spontaneous, Bajracharya doesn’t believe in creating concrete plans for the future. The Supreme Court is creating a Judiciary Museum so she is mostly busy handling the logistics for that in her capacity as the curator during her office hours. AndBajracharya is also training herself to process written words better by herself these days. “But I live to draw and paint. That’s my main thing,” she concludes.

Is Nepal prepared to deal with floods in light of COVID-19?
10 hours ago

Only two electric vehicles got customs clearance on May 27: Customs Department
12 hours ago

PHOTOS: 169 Nepalis arrive at TIA from UAE
2 hours ago

India set to reopen temples, malls but no sprinkling of holy water
3 hours ago