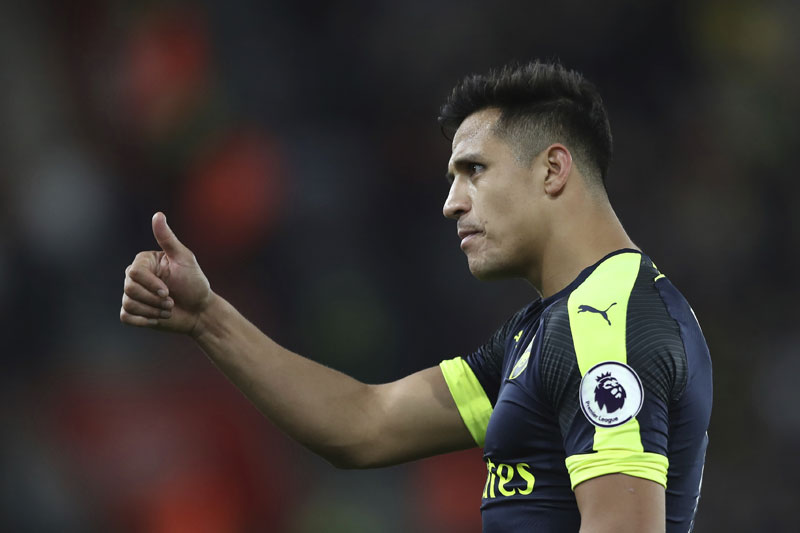 SOUTHAMPTON, May 11: Alexis Sanchez produced a clinical finish to set Arsenal on its way to a 2-0 win at Southampton in the Premier League on Wednesday, keeping alive the team's ambitions of qualifying for next season's Champions League.

Sanchez moved onto 20 league goals for the season when he collected Mesut Ozil's first-time through-ball and deceived two defenders with a clever turn inside the area, before slotting home a low finish in the 60th minute.

"That's Alexis," Arsenal manager Arsene Wenger said. "He is always tricky to stop, very good in a short space once he has the ball in the box."

Olivier Giroud — just on as a substitute — added the second goal in the 83rd, heading home after Sanchez's cross was helped back into the middle by Aaron Ramsey.

Arsenal is making a traditional late-season charge in a bid to seal a top-four finish, with this fourth win in its last five league games lifting Wenger's side above Manchester United and into fifth place. Arsenal is three points behind fourth-place Manchester City, and four points behind third-place Liverpool with a game in hand.

"I wish we'd found this before," Arsenal defender Shkodran Mustafi said," but we have three games left."

Those games are against Stoke, Sunderland and Everton, teams who have little left to play for. Liverpool finishes the season at home to already-relegated Middlesbrough but could encounter more problems on Sunday at West Ham, which has found some form and beat second-place Tottenham last week.

The only negative for Arsenal at St. Mary's Stadium was right wing back Alex Oxlade-Chamberlain limping off injured in the 36th minute. Key center back Laurent Koscielny had already failed a late fitness test.

Arsenal has kept three clean sheets in its last four games, having recently switched to a three-man defense.