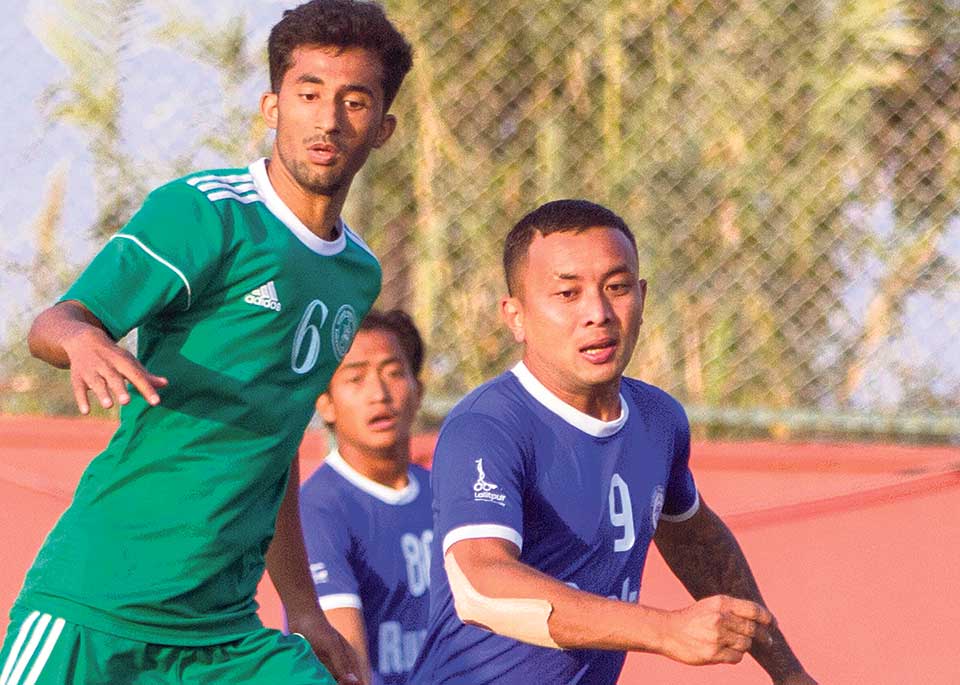 KATHMANDU, Nov 27: National team striker Bharat Khawas finally scored a goal as the departmental team Tribhuvan Army Club registered a big margin win of 5-1 over CMG Sankata Club, which was on a winning streak of three straight games, in the Martyr’s Memorial A-Division League on Monday. The win sent Army to the top of the table.

At the All Nepal Football Association (ANFA) Complex in Satdobato, Lalitpur, Army strengthened the bid on its way to win the title after overturning a 1-0 deficit to a big win against Sankata. Sankata had taken the lead through Maxwell Elon in the ninth minute.

Elon had taken advantage of Army keeper Bikesh Kuthu coming forward to get the ball after Sankata’s Dipesh Ale Magar gave a beautiful pass to Elon.

Army had brought the game to the level eight minutes after the first goal. Tanka Basnet took a free-kick in the 17th minute which was headed by Bikash Tamang, and his miss-hit header was guided into the back of the net by Tek Bahadur Budathoki.

Initially, Army was not able to coordinate properly, but presented a better performance afterwards and Khawas scored the second goal to give the departmental side the lead. Khawas utilized a pass from Dinesh Hemjun after the latter cleverly thread him the ball in the 30th minute. Khawas beat Sankata keeper Raja Babu Thapa to score the second for Army.

Both the teams got several chances near the penalty areas throughout the match to score, but could not convert them.

Army had got a chance to score from the spot after Sankata’s Amit Tamang fouled Tanka Basnet inside the box in the first minute, but Santosh Tamang hit the cross bar and Army could not take an early lead. In the second half, Army defender Bikash Khawas tripped Sankata’s substitute Nitin Thapa inside the box, but Amit’s shot went over the bar and Sankata could not equalize the game.

Then, Army scored three more goals in the second half to break Sankata’s winning streak. Army got a free-kick after Sankata’s Subhash Gurung handled the ball with his hand inside the box. Army’s Santosh scored from a free-kick in the 63rd minute to give his side a 3-1 lead.

Army started to go for counter attacks after that and Budathoki scored for the team for a 4-1 lead. Khawas hit a corner, and the ball landed in the danger area, but the shot was saved by keeper Thapa. Budathoki then controlled the ball and hit a shot which went in for Army’s fourth.

Hemjan scored the fifth for Army in the 77th minute sending the game beyond doubts. Keeper Thapa hit a goal-kick, but Hemjan controlled the ball with his chest and began running with the ball to Sankata’s post and scored a brilliant individual goal.

Army head coach Nabin Neupane said that his team will be trying to catch up to the rhythm of the earlier season.

“Army has not come into the rhythm we have hoped for with the four games played. But, the performance has been better. We will try to catch up the rhythm of the earlier season,’’ Neupane said. “We conceded the first goal because of the misunderstanding between the keeper and the defense, but got back in the game pretty fast. The attackers played well in this game, and all the players played to their absolute best.’’

Sankata head coach Salyan Khadgi said that his team had to face the defeat because of the lack of coordination between the players.

“The team looked nervous after taking the lead. The unprecedented head to head goal inside the penalty box became the turning point of the match, ’’ Khadgi said. “The confidence of the players went down after missing the penalty in the second half. The lack of coordination between the defense and the midfield with the passes was not according to the tactics. We will move forward trying to correct these issues.’’

In the other match played on the same day, title contender Ruslan Three Star Club moved up to the second after a 2-0 win over New Road Team.  Three Star returned superbly into the title race after it had lost 2-1 to Laxmi Hyundai Manang Marshyangdi Club in the last round.

Three Star left it late and took the lead in the 75th minute through Ranjit Dhimal, while it scored his second goal in the first minute of the injury time.

Three Star got a penalty 15 minutes before the full time as Ajayi Martins was fouled by Asis Ban. Dhimal’s spot kick was saved by keeper Ajit Prajapati, but he scored in the rebound to give his side 1-0 lead.

Three Star was awarded a free-kick in the injury time. Bikram Lama hit the kick, and Sunil Bal provided his head to it. Bal’s header came straight to a far lurking Martins, who provided a final header to guarantee Three Star’s third win in four games.

In the game played at the Armed Police Force’s Halchowk Stadium in Halchowk, the departmental team Nepal Police Club came back after its loss to Army in the third round, but defeating Chyasal Youth Club 2-0.