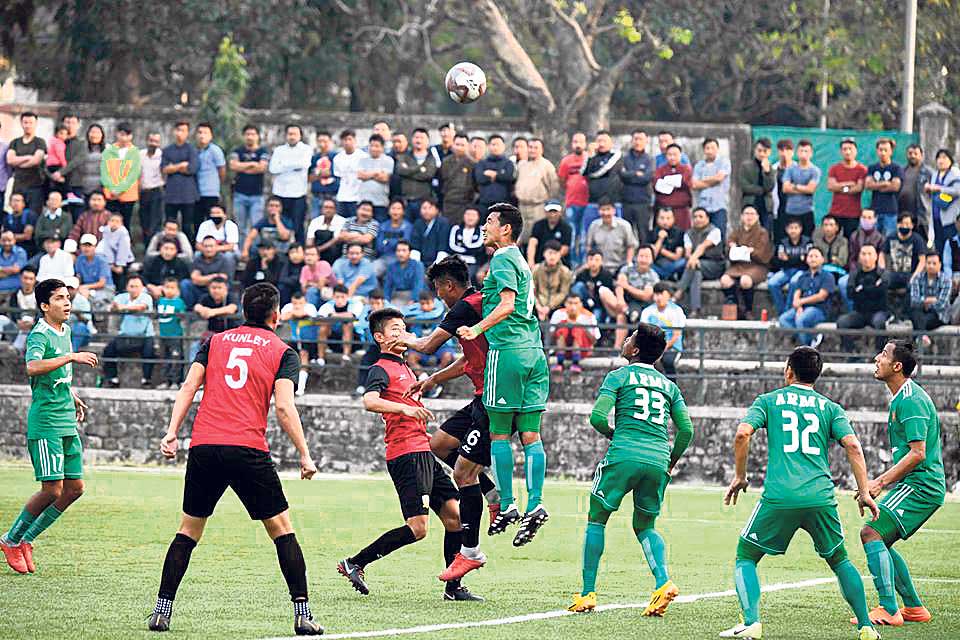 PHUNTSOLING, Feb 16: Tribhuvan Army Club has advanced into the semifinals of the ongoing Jigme Dorje Wangchuk Memorial Gold Cup football tournament with a staggering 6-0 win over Thimpu FC in Phuntsoling on Friday.

Captain Bharat Khawas scored a brace for the team, while Nawayug Shrestha, Bimal Pandey and Santosh Tamang added a goal each for the departmental team.

Khawas opened the scoring in the fifth minute, while Shrestha doubled the lead in the 31st minute. Khawas completed his brace after five minutes, while Pandey made the score 4-0 inside the first half.

Migham Jigme scored an own goal in the 76th minute before Tamang completed the rout for the A-Division outfit two minutes later.

Another A-Division team Three Star Club will be targeting a semifinal place when it takes on Ujjain FC on Saturday.

A total of 12 teams from host Bhutan, Nepal and India are taking part in the tournament, with Three Star and Army playing directly from the quarterfinals. The other teams are Bhutan’s Thimpu FC, Phunsoling SA, High Quality United, Ujjain FC, Para AFC, Durk FC, including India’s Calidpod FC and Achham FC.

“We have participated in different domestic tournaments after playing the A- Division League. So, the team will play its best and all the players are fit as well,’’ KC boasted.

Three Star, who finished third in the league, won Simara Gold Cup, while it finished runner-up in the Khaptad Gold Cup. It crashed out of the first round in the Madan Bhandari Gold Cup and the Manakamana Cable Car Pokhara Cup.

KC said that the team is full of confidence after a few new players have joined the team after the league.

“Ananta Tamang is back in the team, along with Dinesh Rajbanshi. Foreign players Peter Segun and Ajayi Martins, who played in the league, but did not participate in other domestic tournaments, have returned as well,” KC added.

“The team has become balanced with their arrival. We are hopeful of advancing into the next round with good results.’’

“We are mentally and physically prepared to play brilliant in the quarterfinals. We will do well despite travelling for 30 hours.’’

“We have not watched Ujjain play. So, we will only prepare the tactics when we reach the stadium,’’ he said.

The tournament is one of the oldest football tournaments of Bhutan and is being organized for the first time since 2006.

Three Star captain Bikram Lama said that the team will play with a good rhythm as all the players are fit.

“The team is balanced and we have added some new players,’’ Lama said,” I am hopeful that the team will do well because of the coordination of the new players. The team has become strong with their arrival.’’