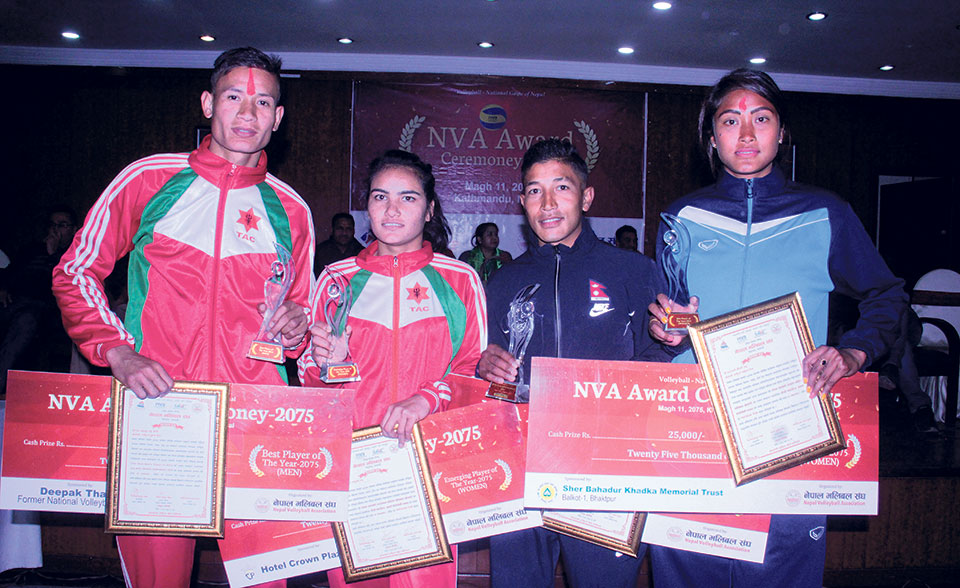 (From left to right) Dhan Bahadur Bhatta and Niruta Thagunna of Tribhuvan Army Club and Binod Bahadur Chand and Saraswati Chaudhary of Armed Police Force Club pose for a group photo with their awards during the National Volleyball Association Awards (NVA) in Kathmandu on Friday. Photo Courtesy: NSC

KATHMANDU, Jan 26: The Nepal Volleyball Association (NVA) has named departmental club players Dhan Bahadur Bhatta and Saraswati Chaudhary the best players of the year in the NVA Awards on Friday.

Bhatta and Chaudhary were awarded on the basis of their brilliant performances in the tournaments played in and outside Kathmandu. They got Rs 25,000 each.

Similarly, APF was named the best women’s team, while Army won the award as the best men’s team. Both the teams got a cash prize of Rs 100,000 each.

On the same occasion, former captains Bharat Shah and Anju Shrestha were felicitated for their contribution to the game during the years they played. They were rewarded with a cash prize of Rs 25,000 each.

KATHMANDU, Sept 25: Locals in Shiwalaya Rural Municipality in the western part of Jajarkot district have no other choices except... Read More...