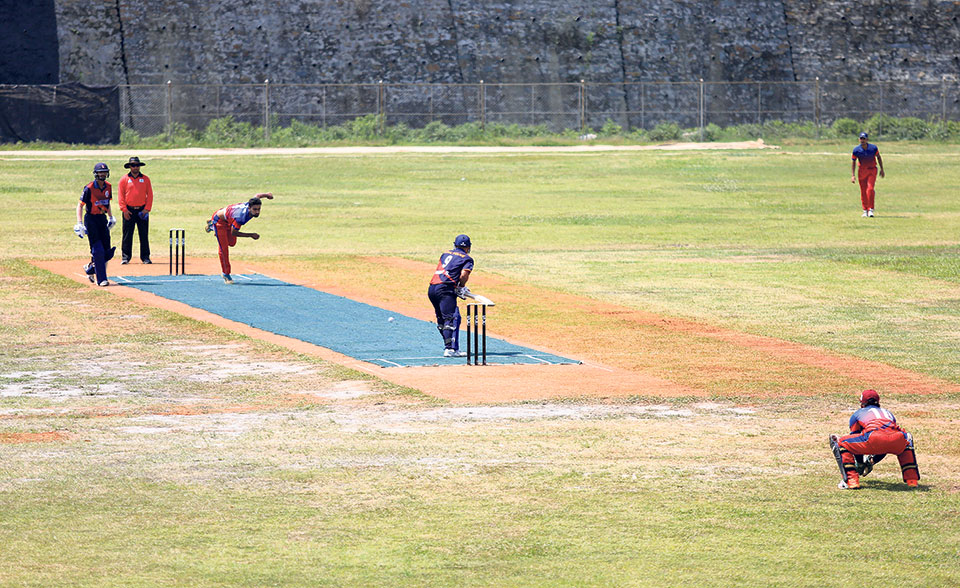 Army and Police, both Group B contenders, defeated Province 1 and Karnali Province by 113 and 94 runs, respectively.

In the match played at the Tribhvan University (TU) Cricket Ground in Kirtipur, a half-century from Rajesh Pulami Magar inspired Army to a big win over Province 1.

Earlier, Army won the toss, elected to bat first and presented a target of 205 runs losing all its wickets in 45.3 overs. In reply, Province 1 was all out for 91 runs in 26.5 overs.

An inconsistent batting start from Army propelled the team to 91-4 in 26.4 overs as captain Binod Bhandari hit 30 runs off 34 balls with four fours and a six, while his opening partner Raju Rijal was the first to go out hitting six runs off nine balls including a boundary.

Hari Bahadur Chauhan settled quite well in the inning as he scored 41 runs off 51 balls which included a six and four boundaries, while Magar scored 56 runs off 93 deliveries with four fours.

Likewise, Kushal Malla and Karan KC were the other batsmen to score double digit runs as KC hit 26 runs off 30 balls with two sixes and a four, while Malla scored 16 runs off 16 balls comprising two sixes. The other batsmen failed to reach the double figure.

Dipesh Kandel was the standout bowler for the losing team as he pocketed three wickets giving away 34 runs in nine overs, while Mukunda Yadav, Siddhant Lohani and Firdosh Ansari picked up two wickets each. Also, Puspa Thapa grabbed a wicket conceding 34 runs in 10 overs.

Three players went out for ducks, two players hit four, two hit six and one made seven runs in the losing side’s total.

Susan Bhari was the pick of the Army bowlers as he picked up three wickets giving away five runs in 5.5 overs, while KC pocketed two wickets conceding 19 runs in seven overs. Also, Jitendra Mukhiya, Chauhan and Shahab Alam took a wicket each.

Pulami was named the man of the match.

In the other Group B match played at Mulpani Cricket Ground, Police won the toss, opted to bat first and presented a target of 186 runs for the loss of all its wickets in 41 overs. In reply, Karnali was all out for 91 runs in 27 overs.

Only two Police batsmen reached the double figures, both scoring half centuries, while others went out easily with the score being 22-5 in 8.5 overs.

Dilip Nath hit the highest 72 runs off 84 balls which included a six and five fours, while he was supported by Kushal Bhurtel who scored 62 runs off 77 balls with a six and six fours.

Sudan Pokhrel of Karnali became the first player to take five wickets in the tournament as he conceded just 16 runs in seven overs which included two maidens. Likewise, Diwan Pun picked up two wickets for the team, while Dipan Adhikari and Rabindra Bikram Shahi took a wicket each.

Nath was named the man of the match.

The other departmental team Armed Police Force (APF) Club will take on Sudur Paschim Province in Kirtipur on Monday, while Province 3 goes head to head with Province 5 in Mulpani. 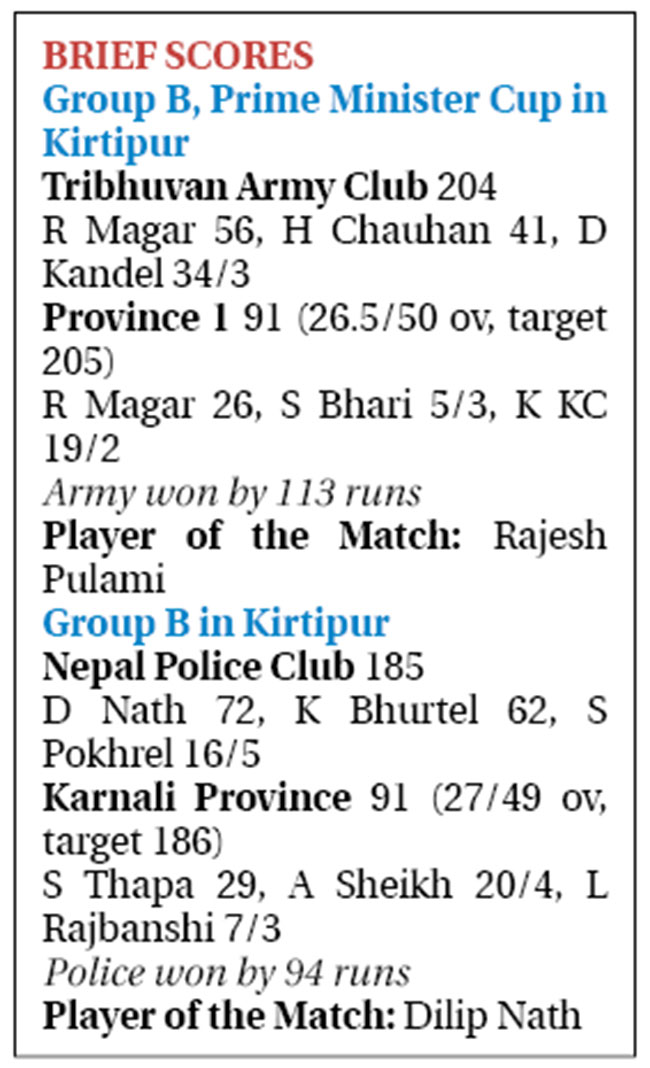 Statue of Bhrikuti at Bhrikuti Fun Park unveiled
30 minutes ago