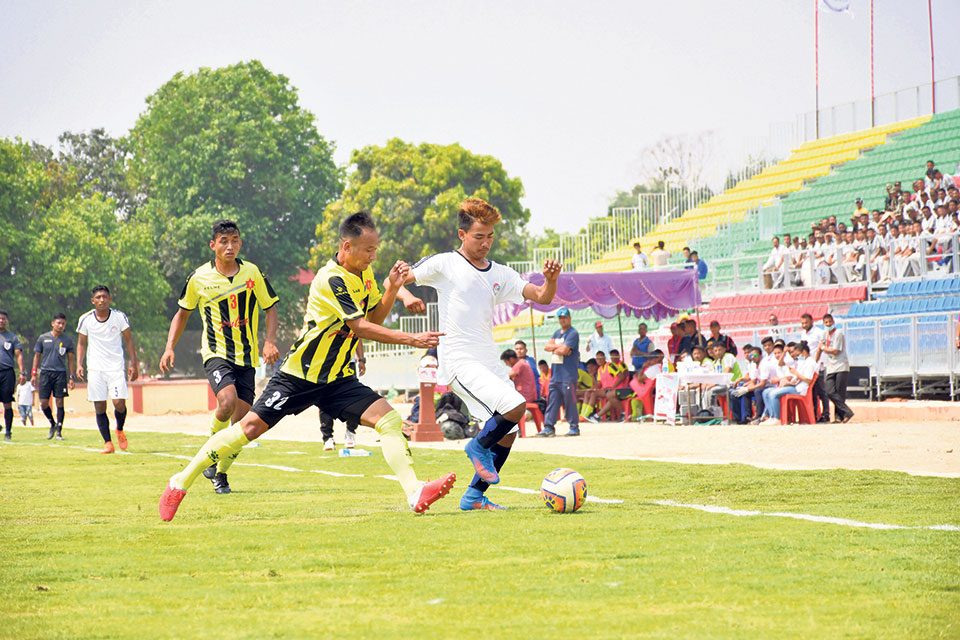 Players of Tribhuvan Army Club and Province 5 in action during their men’s football semifinals of the Eighth National Games at the Nepalgunj Stadium in Nepalgunj on Tuesday. Photo: G Thapa/Republica

KATHMANDU, April 24: Departmental team Tribhuvan Army Club defeated Province 5 in a penalty shoot-out to reach the football final of the Eighth National Games in a semifinal match played at Nepalgunj Stadium in Nepalgunj on Tuesday.

Army sent past 3 against host team Province 5’s 1 during the spot kicks to advance to the finals after the 90 minutes ended in 2-2 stalemate. Army strikers Nawayug Shrestha, Bibek Basnet, and Santosh Tamang scored in the penalties against Krishna Rana Bhatt’s solo success for Province 5. Dipen Singh Thakuri, Chetan Chaudhary, and Bibek Pun failed to convert their shots for the losing team, whereas Jitendra Karki and Deepak Gurung’s failed strikes didn’t cost the match for Army.

Earlier, in the match, Army took the lead off Thakuri’s own goal in the 20th minute followed by Deep Kumar Lama’s finish in the 31st minute to put the departmental team 2-0 up until the 75th minute.

Binod KC registered his name in the score-sheet to give the host team a lifeline in the match. He followed it by his second goal five minutes later to equalize the score. KC calmly converted the spot-kick conceded by Army in the 80th minute.

In women’s category, departmental teams Army and Armed Police Force Club (APF) have secured final match for the gold medal on Wednesday after winning their respective semifinal matches played at Beljhundi in Dang on Tuesday.

Army defeated Province 3 by a one-sided score-line of 6-0. Bimala Chaudhary started the goal-scoring spree with her first strike in match followed by a brace from Sharmila Chaudhary in the 37th and 40th minutes. The first half ended on 3-0. Similarly, Krishna Khatri further increased the lead with brace on the 60th and 67th minutes followed by Indira Rai’s 80th minute strike to finish the match with a final score of 6-0.

Likewise, in the other semifinal match of the day, APF defeated Nepal Police Club (NPC) in a tie-breaker to reach the final scheduled for Wednesday. The match finished 1-1 in the full time followed by a nail-biting tie-breaker which APF won 6-5.

Special session of parliament scheduled for today
15 minutes ago