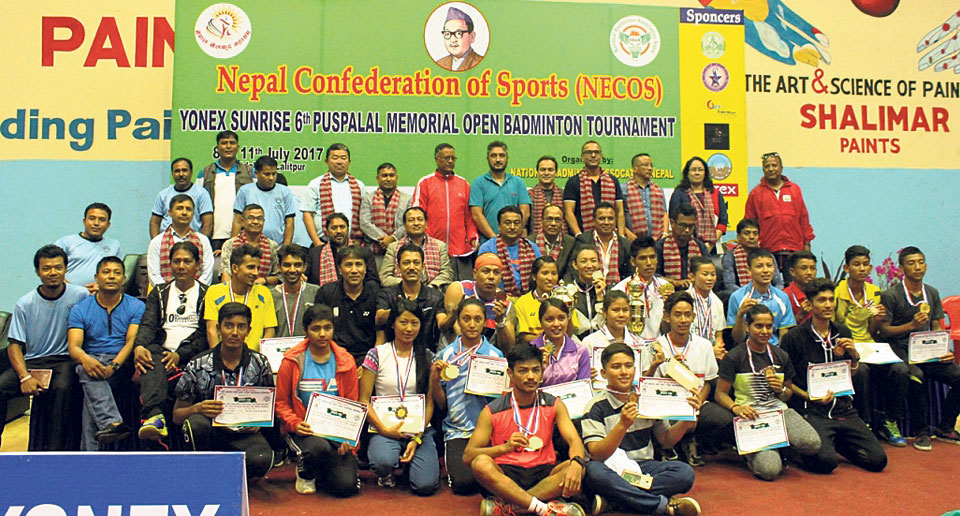 The tournament organized by Nepal Badminton Association saw Tamang siblings of Army team--Ratnajit ,Nangsal - defending the titles beating the opponents of the same departmental side.

In the men’s singles final played at International Sports Complex, Satdobato, Ratnajit registered 23-21, 21-17 win over Nabin Shrestha while Nangsal defeated Amita Giri by 21-14, 19-21, 21-8 in the in the women’s singles summit clash.  Winners in the singles event of both men and women section were rewarded with Rs 50,000 respectively while the runner-ups were given Rs 25,000.

Similarly, Nepal’s number one Ratnajit added another title as well as he and Nabin saw off the pair of Bishnu Katwal and Dipesh Dhami of Nepal Police Club by 21-17, 21-18 in the men’s doubles final.  In the women’s doubles final, the pair of Nagsal and Anu Maya Rai registered 21-11, 16-21, 21-14 win over the Armed Police Force (APF)’s pair of Puja Shrestha and Yam Kumari Gurung. Winners of the men’s and women’s doubles were given Rs 20,000 while the runner-ups got Rs 10,000.

In the veterans over 45 category final, Annapurna Badminton Club’s pair of Shyam Parajuli and Nabin Babu Shrestha beat the pair of Prem Chand and Ganesh Chand of Nepal Police Club by 21-10, 21-12.

The winners in the age group singles were rewarded with Rs 10,000 while the runner-ups were given Rs 7,000.