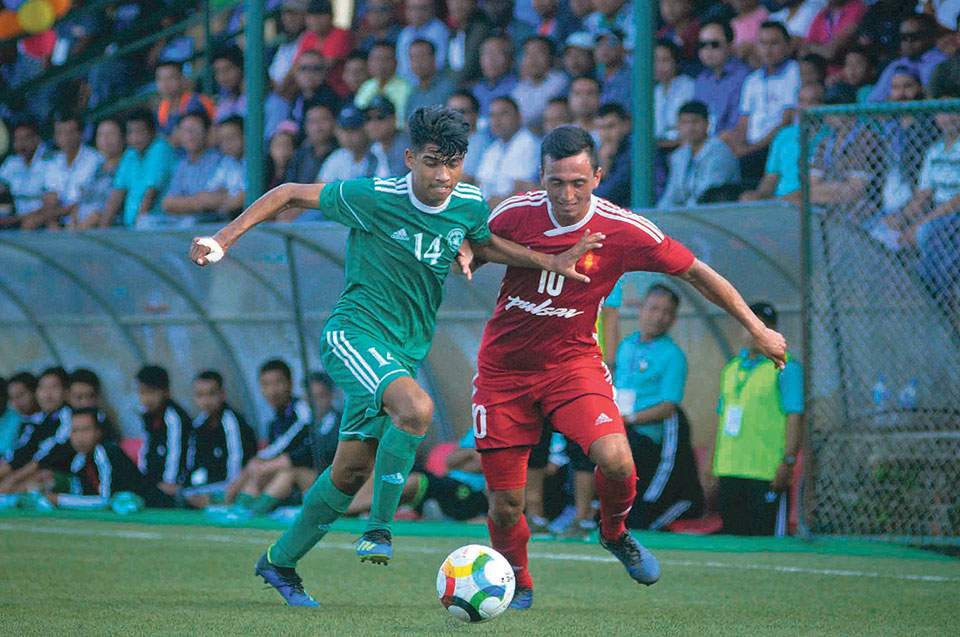 KATHMANDU, Sept 30: Tribhuvan Army Club held New Road Team (NRT) in a 2-2 draw in the Martyr’s Memorial A-Division League opener after referee Sudish Pandey awarded the departmental team an indirect free-kick in the last minute of the match on Saturday.

In the first match of the league, which is being organized after a five-year hiatus, Pandey awarded Army the indirect free-kick after NRT keeper Ajeet Prajapati was adjudged to have hold on the ball to his possession for more than six seconds.

The NRT officials were angry over the decision when Army’s Santosh Tamang coolly scored the free-kick in the 96th minute hitting the ball in off the underside of the bar.

NRT head coach Maheshwor Mulmi accused the referee of favoring Army in the last minute of the match and claimed that it was injustice to his team.

“This is injustice to our team. That was not a foul at all. The opposition did the same once or twice, but he did not take any action over that. But, he gave a free-kick to them for the similar action by our keeper,’’ Mulmi said. He accused the referee of supporting Army and said it was clearly seen after he made that decision.

“We will certainly protest against the decision, but I am not sure what will happen as ANFA can’t do anything,’’ Mulmi added.

NRT played a defensive game with five players in the defense, four in the midfield and a lone forward. Army found it hard to break the compact defense line of NRT and was often caught in the counter attack in which NRT scored its second goal.

NRT took the lead in the 12th minute of the match through Rojit Pudasaini as he scored with his right foot from the close range after a shot from Rajesh Pariyar fell to his path. Army took a while to pull a goal back, but as an NRT player was judged to have controlled the ball with his hand in the box, Army was awarded a penalty and Tamang put the ball into the left bottom corner to equalize in the first half.

Army got a lot of chances to score, but it failed to capitalize on any of it. When Nawayug Shrestha got a chance in the fourth minute, his poor shot was saved comfortably by the keeper.

NRT keeper Prajapati looked pretty confident and saved a lot of crosses that came to his way. He saved a deflected shot from inside the box in the 13th minute.

Army found it tough to break the compact and solid defense line of NRT in the second half as well considering the departmental side’s poor performance in the final third where it could not provide even a single telling ball to the attackers.

Army then was left behind again as striker Pariyar quite brilliantly adjusted the ball to the ground with his head, shrugged off two defenders on the way and scored to the left bottom corner of the net which was touched on the way by Army keeper Bikesh Kuthu.

NRT also got couple of other chances, but could not score more. Saroj Tamang hit a shot with his right foot from outside the box, but it was saved by Kuthu.

NRT coach Mulmi also said that he is quite satisfied with his team’s performance and that it was a hard task to get such a result against a team like the Army.

“We played a defensive game with five defenders at the back. We are a counter attacking team and we utilized our defensive superiority to score in the break and we did just that,’’ Mulmi said. “We have most of the players from B-Division clubs along with some 19-20 age group players. The young boys did really well and it was a good performance from the boys because it’s not easy to play against a team like Army. But, the referee’s decision was biased and we suffered because of that. We were one minute away from winning the match.’’

Meanwhile, Army head coach Nabin Neupane said that he does not expect to win the title, but his team did not even show the performance if they are to do well in the league.

“I do not expect my team to win the title, but I could not see even 25 percent of performance I had expected. The first match of the league is a pressure for us, but we could not handle it and went behind two times,’’ Neupane said. “NRT had a compact defense, and they played a counter attacking football that we could not tackle properly, let alone stop it. We were unable to break their defense and our central midfield could not even hold on to the ball.”

Neupane said he doesn’t want to blame the forwards at all because the midfield could not provide the final balls to them. “If you do not have a midfield to feed balls to the attackers, they can’t do anything on their own. We got just a point from this game, and this can prove us costly. This is just the first game of the league, and even though we got a goal late in the game, but it was a very poor performance.’’