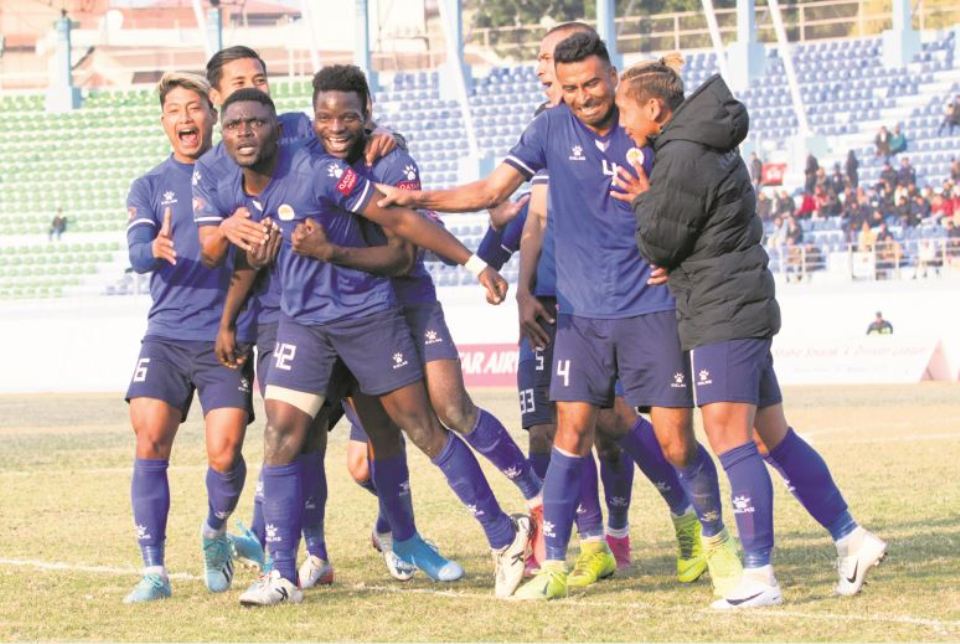 KATHMANDU, Jan 26: Leader Tribhuvan Army Club could not put its inconsistency aside as it failed to go three points clear at the top ahead of Machhindra Club and Manang Marshyangdi Club as it was held to a 0-0 draw by New Road Team in the ongoing Martyr’s Memorial A-Division League in Kathmandu on Saturday.

In the other game played later on the same day, Sankata Club registered its third win of the season as it defeated Friends Club 1-0 to reach the seventh place.

In the first match, Army created a lot of chances in the game with spaces from wide areas utilizing the four-forward formation and hit NRT on high pressure counter attack.

Nawayug Shrestha got an early chance in the fourth minute as he hit a shot from just outside the box, but the shot went off target.

NRT tried to create space for attack as it moved from the middle part to exploit the two pivots of Santosh Tamang and Sesehang Angdembe. But, it could not get clear cut chances as it failed to get the cross-ins inside the box.

George Prince Karki was again off color as he tried a shot from outside the box in the 10th minute, but his shot was over the bar. Army got another chance five minutes later through a free-kick, but Santosh’s shot which was headed by Bharat Khawas, was grabbed safely by NRT keeper Arik Bista.

NRT did not just sit back and defend, but created a lot of chances, but a strong Army defense did not let it take good shots on target.

Darsan Gurung got a real chance to draw the first blood for NRT, but his shot from the center of the danger era, was out of the frame in the 17th minute.

It was Army who kept on dominating in the game as Karki got good chances, but failed to convert both of them.

Karki hit a fierce shot in the 16th minute, but Prajapati produced a fantastic shot to deny Army the lead. He had another crack on goal in the 21st minute, but the shot went wide.

NRT again threw a good chance a minute later as Saroj Tamang put a good cross inside the box, but Jordan Owona could not get his shot to it.

Army got a lot of set-piece opportunities in the first half, but could not convert any of them.

The team started the second half as it ended the first as Saroj beat two Army defenders, but his shot was saved by Army keeper Bikesh Kuthu in the 49th minute.

NRT got a few free-kick chances in the second half, but could not convert them.

Arik Bista got a free-kick chance in the 52nd minute, but his shot went off target.

Khawas got a good shot a minute later, but his shot from outside the box was brilliantly blocked by defender Nabin Gurung.

Army missed another chance as Dinesh Henjan produced a good cross looking for Khawas, but his header went just off target in the 63rd minute.

Henjan was in the thick of things as his shot from close range was saved well by keeper Bista again in the 71st minute.

The last 10 minutes of the game saw a very good performance from NRT as it defended in numbers not allowing Army any breakthrough. It pressed Army high and got the numbers behind the ball to deny them any chance from the cross-ins.

Tek Budathoki hit a good shot on target in the 85th minute, but Bista produced a fine save again.

But, NRT was under the knife after it was a man down in the second minute of the injury time as Junior Onguene was sent off for a rash challenge of Youddha Shahi.  Santosh stepped to take the free-kick in the fourth injury time minute after some pauses, but his shot was brilliantly saved by keeper Bista again.

Prajapati was deservedly named the man of the match after his class goalkeeping performance.

With the result, Army still stays top, but has 17 points, a point more than both Machhindra and Manang, who are second and third respectively. The departmental side has won five matches, drawn two and lost just once.

Likewise, NRT is fifth with 12 points, a point less than Three Star Club in fourth. It has won four games, drawn two and lost two so far.

In the other game, a second half strike from Ajaya Martins Kayode sealed a 1-0 win for Sankata over Friends.

Martins scored the winner in the 64th minute converting in a free-kick from Subash Gurung.

Sankata was totally authoritative in the match creating the majority of the chances with shots on target, but could not add more goals.

With the result, Sankata has 12 points and sits in the seventh place. It has won three matches, drawn three and lost two. Likewise, Friends is in the 11th place with eight points including two wins, two draws and four losses.