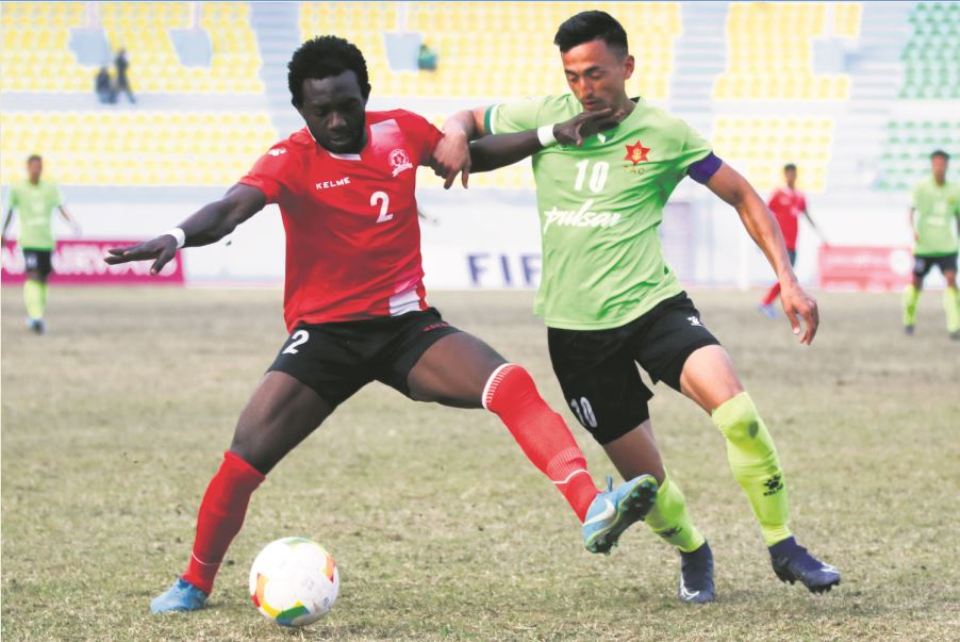 KATHMANDU, Jan 10: It was a tale of a bridge of difference between the two departmental teams on the last day of the fifth round matches on Thursday as Tribhuvan Army Club shot its way to the top of the ongoing Qatar Airways Martyr’s Memorial A-Division League, while Armed Police Force (APF) Club lost yet another match and is languishing in 11th place.

Army, who had earlier won three matches including a tremendous 1-0 win over Three Star Club, beat bottom-placed Saraswati Youth Club 1-0 to reach the top of the table leaving contenders Manang Marshyangdi Club and Machhindra Club behind.

On the contrary, APF struggled in yet another match as it lost in a 4-2 thriller against Sankata Club and is currently lying on the company of strugglers Himalayan Sherpa Club, Friends Club and Saraswati Youth Club, all three who haven’t been able to win a single match this season.

In the late kick-off the day at the Dasharath Stadium in Tripureshwar, a first half goal from George Prince Karki, who after scoring the  goal pulled his shirt up to flash ‘Proud Gunner, Army Forever’ referring to being a proud Premier League team Arsenal fan in the half and hour mark of the game.

Dinesh Henjan produced a superb playmaking performance for Army in a forward four role along with Nawayug Shrestha, Tek Bahadur Budathoki and goalscorer Karki. Budathoki came in for Captain Bharat Khawash in the 13th minute.

Henjan was in the thick of things with sublime passing performance as Army cruised forward with proper passing passage of play, laying the ball to the flanks and looking for crosses.

It was a superb performance from Army as far as the linkage between the players is concerned as the four forward players kept knocking the Sarswati door, but could not convert the chances into goals.

Henjan got an early chance in the very first minute of the match as he hit a shot from outside the box, but the ball went out of the frame, while he took another shot from a close range three minutes later, but the ball went off target again.  Army maintained the possession superbly and looked like a title winning side, but the failure to convert the chances hurt the team who would have wanted to add more to its tally.

Saraswati was looking for an opening to quickly get on to attacking mode to avoid losing for five successive times in the league, but gave the possession cheaply and Army was well on it forward.

Army nearly scored the opener in the 25th minute as Santosh Tamang supplied a superb ball to Shrestha inside the box, but he could not pull out a good technique to get the shot on target. Two minutes later, Karki hit a good shot from inside the box, but keeper Bhandari made a fantastic save to deny the young forward.

But, despite Bhandari’s goalkeeping brilliance, Karki finally scored the goal as he converted a good passage of passing display and eventually a through ball from Henjan into the net in the 30th minute to give Army the crucial lead.

Shrestha had another chance to score, but his header went off target from a Suman Aryal cross in the 43rd minute.

Army had other chances to score in the second half, but it could not deliver in the final third and kicked itself for failing to prevail against a weakened Saraswati team, which looks destined to go down to the B-Division next season after five straight losses and having scored only one goal.

Army started pressing high and allowing Saraswati no chance at all to attack with combination of good attacking and defensive displays. Shrestha had another heading effort in the 74th minute, but he missed it again.  Tanka Basnet got a crucial chance to double the lead just a minute later, but his shot from inside the box was brilliantly saved by keeper Bhandari. The second chance he got in the 79th minute was closer as his shot hit the woodwork.

The terrible day for Shrestha was capped by another miss inside the box as his shot just whiskered wide in the 84th minute, while he had a chance to score again, but his overhead shot a minute later was off target.

With the result, Army is top with 12 points from four games with four wins and a loss, while Saraswati is at the bottom with no points so far.

Earlier on the day, Sankata Club added a late goal to its 3-0 lead to win the game 4-2 against APF, despite the struggling departmental side scoring two back to back second half goals.

Laxman Ruchal scored directly from a free-kick in the 19th minute to draw the first blood for Sankata, while Karna Bahadur Subba scored in his own rebound shot after keeper Amrit Kumar Chaudhary spilled the ball in the 44th minute to double the lead.

Sankata started the second half as it ended the first. Ajayi Martins made it three for Sankata with a proper placement header in the 53rd minute.

Nabin Lama pulled one back from the spot in the 56th minute to make the score 3-1, while Nabin layed the ball to Aashish Lama, as he scored the team’s second from outside the box to get some hopes for APF.

But, Martins completed his brace in the 88th minute to close the doors for any comeback for APF and secure a vital win.

With the result, Sankata has climbed up to the seventh place with two wins, a draw and two losses, while APF is 11th with a win, a draw and three losses and has four points.