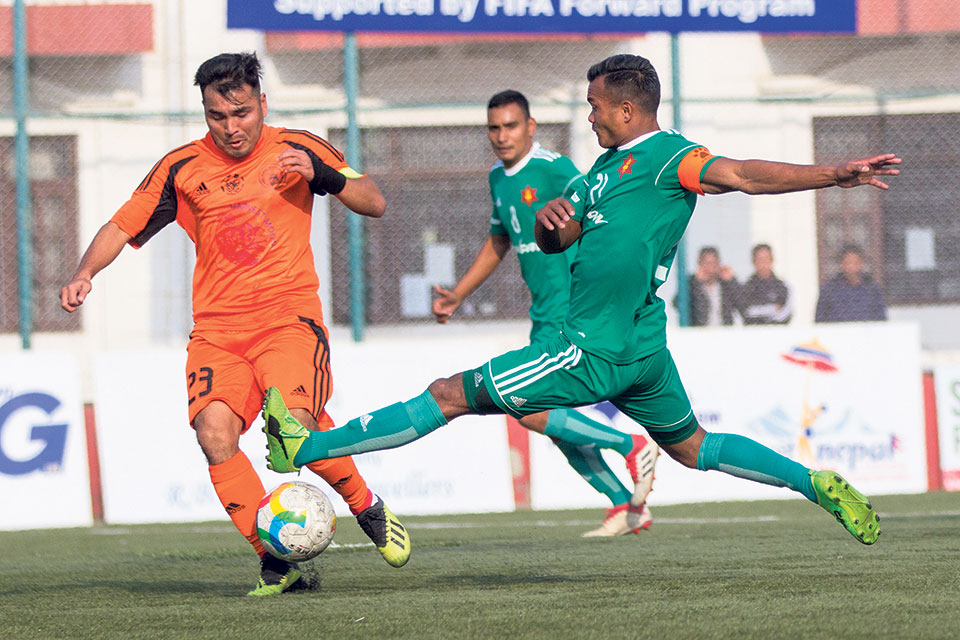 At the All Nepal Football Association (ANFA) Complex, two goals from captain Bharat Khawas either side of the half helped Army register its fourth consecutive league win of the season. With the defeat, Himalayan Sherpa’s unbeaten run has ended as the team had won three and drawn one prior to this match.

Army, who had kept Himalayan Sherpa under pressure from the start, took the lead in the 33rd minute as Khawas headed in a Santosh Tamang corner.

Earlier, Tanka Basnet had got a chance to give Army an early lead in the eighth minute, but his shot after a through ball from Tamang was brilliantly punched away to safety by Himalayan Sherpa keeper Kishor Giri.

Himalayan also got chances in the first half as Karna Limbu got a chance in the 12th minute, but he could not finish from inside the penalty box. Also, Bishwas Shrestha gave a cross to Limbu inside the box, but he failed to score in the 21st minute.

Himalayan defender Ashish Gurung made a mistake near his own box and gave the ball away to Khawas. Khawas passed the ball to Dinesh Hemjan, but his poor low shot went wide in the 39th minute.

Army, who lead the first half 1-0, deployed a defensive tactics and attacked in counter in the second period. Army was rewarded for its change of tactics as Khawas scored the second goal of the game in the 84th minute. He converted a Hemjan pass to double his tally.

But, Army conceded two minutes after that. Himalayan’s Ulrich Siewe scored for the team as his 20 yards out shot went beyond Army keeper Bikesh Kuthu in the 86th minute.

Himalayan created several chances in the second half with attacking tactics. Rabi Thapa’s shot from 35 yards out was terrifically punched away to a corner by Kuthu in the 59th minute.

Himalayan tried to score an equalizer after getting its late goal, but a defensive Army did not let anything get past its defense.

After the game, Army head coach Nabin Neupane said: “We had made a tactics to keep on pressurizing Himalayan. The players played well, and we created several chances too. But, we could not convert them all.”

“The three points were very necessary for us. Manang has already reached the top of the table winning every game. We had to win in order to counter Manang,” Neupane added.

Whereas, Himalayan head coach Subash Limbu said that they lost the game after failing to convert the chances they got.

“The foreign midfield players did well. A loss won’t affect us much in the league. Even though we suffered a loss, we are in the situation of making a comeback. Our goal is to finish inside the top six.”

With the fourth win of the season, Army is second with 13 points. Himalayan is sixth with 10 points. Manang Marshyangdi Club is at the top of the table with 15 points, while Three Star Club and Sankata Club are third and fourth with 12 each. Nepal Police Club sits at fifth with 10.

Friends, who had lost three consecutive matches prior to this, finished the first half in a goalless draw.

Fofana Brahiman gave Friends the lead in the 65th minute, while Sanjog Maharjan doubled its lead from 35 yards out in the 84th minute.

Machhindra failed to get a goal back despite creating several chances.

But, Anil Maharjan scored his side’s third goal in the fifth minute of the eighth added on and sent the game beyond Machhindra’s reach.

With the win, Friends has climbed up to the table at ninth with four points, while one of only two winless teams, Machhindra, is at the 13th place with two points.

The other winless team is New Road Team.

In the last match of the fifth round played at the Armed Police Force (APF)’s Halchowk Stadium in Halchowk, Jawalakhel Youth Club beat Brigade Boys Club 1-0 to register its first win.

Aruj Singh scored the winning goal for Jawalakhel two minutes from time to give Jawalakhel a crucial win.

Jawalakhel has climbed up to reach the 10th place with four points, while Brigade Boys is 12th with three points. 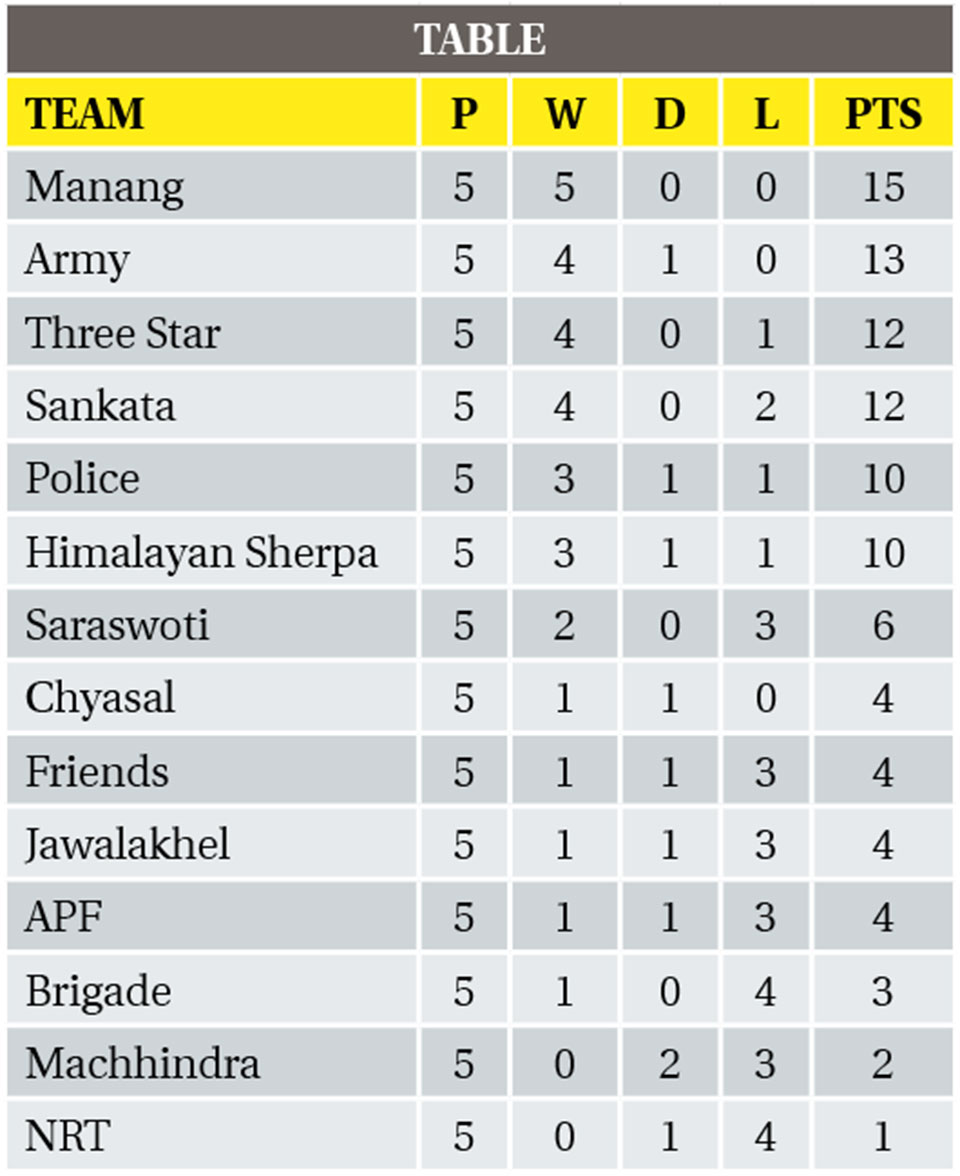