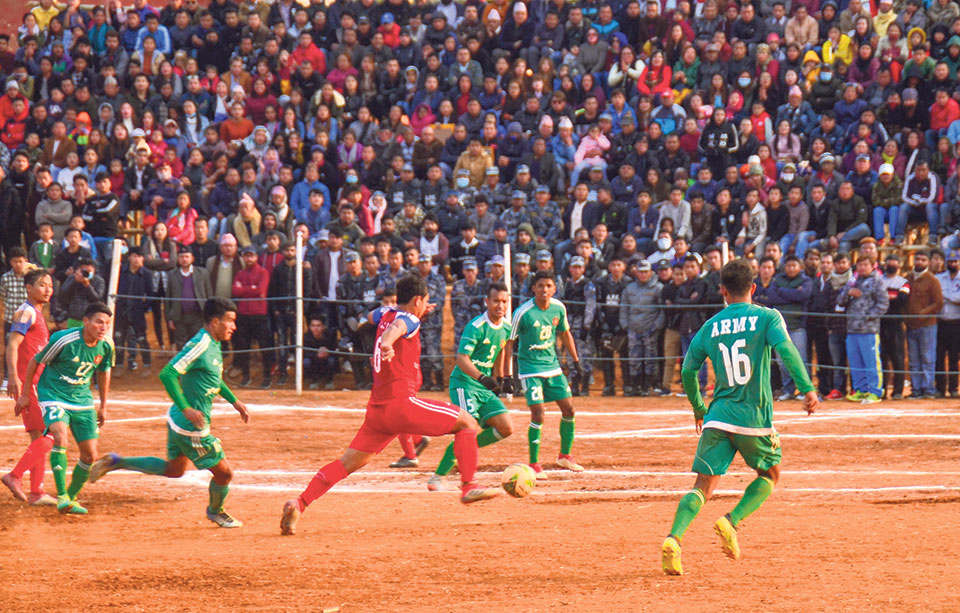 In the last semifinal match, Army has become successful to set a summit clash with Jhapa XI with the win in a highly-competitive match.

Despite playing really well, Royal FC could not avoid a defeat against the fourth-place A-Division side.

Army took the lead in the match after an own goal in the 17th minute when Royal FC’s defender put the ball into his own net trying to clear the ball. Royal FC pulled a goal back instantly in the 21st minute through Siddhant Chhetri as he got a pass from Aadesh Tamang, dribbled past the defenders and scored in one-vs-one.

The game became more competitive after the game was 1-1. Both the teams created several chances, but could not score.

Royal FC’s Nibash Rana missed a glorious chance to score after Army goalkeeper Bishwas Chaudhary slipped in the 29th minute, while Army’s Bibek Basnet hit a shot and goalkeeper tried to save, but spilled the ball and was thankful to defender Pratik Lama as he cleared.

Royal FC was stunned in the 89th minute as Anjan Bista scored a wonderful goal from inside the box after Royal FC could not clear the ball properly resulting initially from a throw-in.

Royal FC tried to get a goal back in the injury time, but was unsuccessful to do so. Bista was named the man of the match for his winning goal.

Army will take on Jhapa XI on Monday in the final.