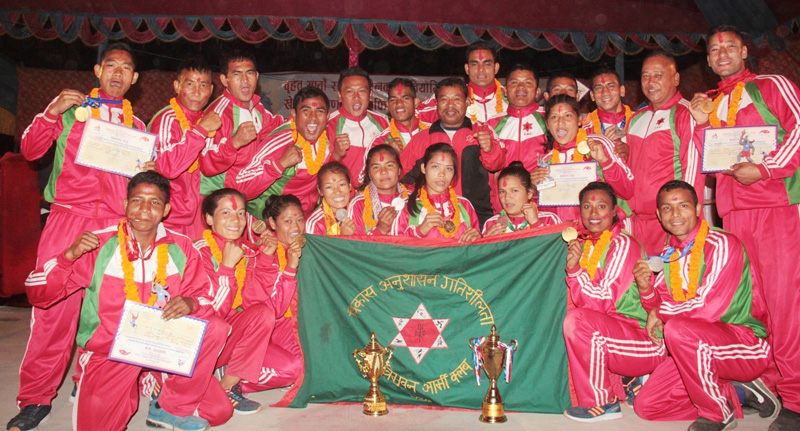 JHAPA, Dec 30: Tribhuvan Army Club has become the champion in boxing event in the ongoing Seventh National Games winning a total of 11 gold, five silver and two bronze medals in both men’s and women’s category. Army, which had bagged 5 golds on Wednesday, added six on the last day of the event held in Jhapa.

Likewise in the men’s 91 kg plus category, Asish won gold for Army and the silver of the event went to Megh Daniel Lama of Central Region.

In the women’s 69 kg event, Sangita Sunuwar of APF bagged gold beating Anuradha Lama of Police in the final. Central Region’s Manohar Basnet claimed gold in the men’s 81 kg event and the silver of the event went to Mahendra KC of Army.

Minister for Youth and Sports Daljit Sripali, Sports Secretary Mahesh Dahal, Nepal Boxing Association  President Ram Awale among the others distributed the medals to the winners .

Departmental teams Armed Police Force (APF) and Tribhuvan Army Club will vie in the final of men’s T20 cricket tournament under the Seventh National Games after they won their respective semifinal clashes played on Friday at Baijnathpur in Biratnagar.

In the first semifinal, APF bowled out Central Region for a meager total of 61 runs in 17.5 overs after the latter elected to bat. In the run chase, APF surpassed the target in 9.3 overs losing two wickets.

Pradeep Airee contributed unbeaten 33 runs for APF while Prithu Baskota was not out on nine runs.

Earlier, none of the Central Region batsmen besides opener Hari Shankar Shah (21 runs off 28 runs) scored in double digits. Karan KC and Basanta Regmi of APF pocketed two wickets each.

In another match, openers Sagar Pun and Anil Mandal starred with the bat for Army as it achieved a mammoth target of 145 runs set by Police in 18.3 overs for the loss of two wickets. Sagar (59 runs off 48 balls) and Anil (not out 62 runs off 54 balls) played 114-run stand for the first wicket before the former was bowled by Manjeet Shrestha. Naresh Budhayer contributed five runs and Raju Rijal remained unbeaten for six runs.

Sompal Kami of Army was the pick of bowling claiming three wickets. Bikram Sob and Chandra Saud shared two wickets each for Army.

The final match will be played on Friday. 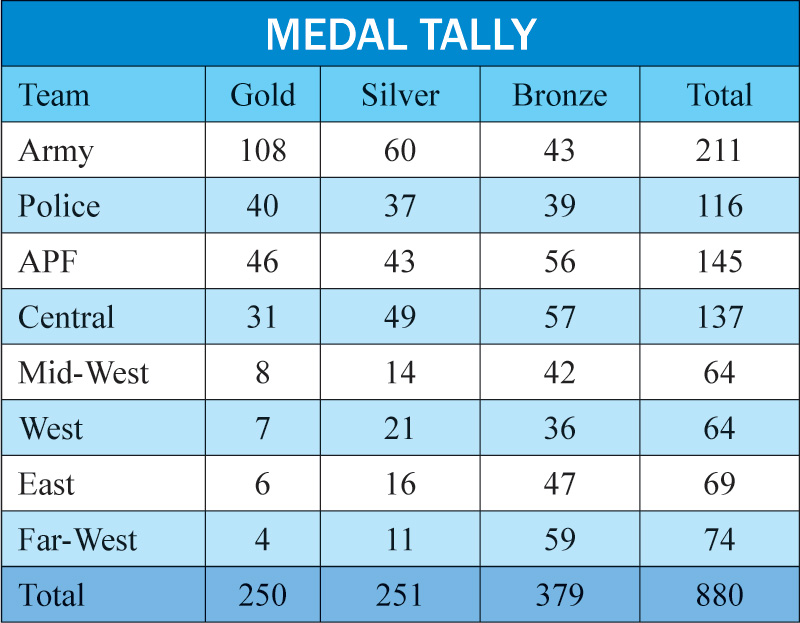