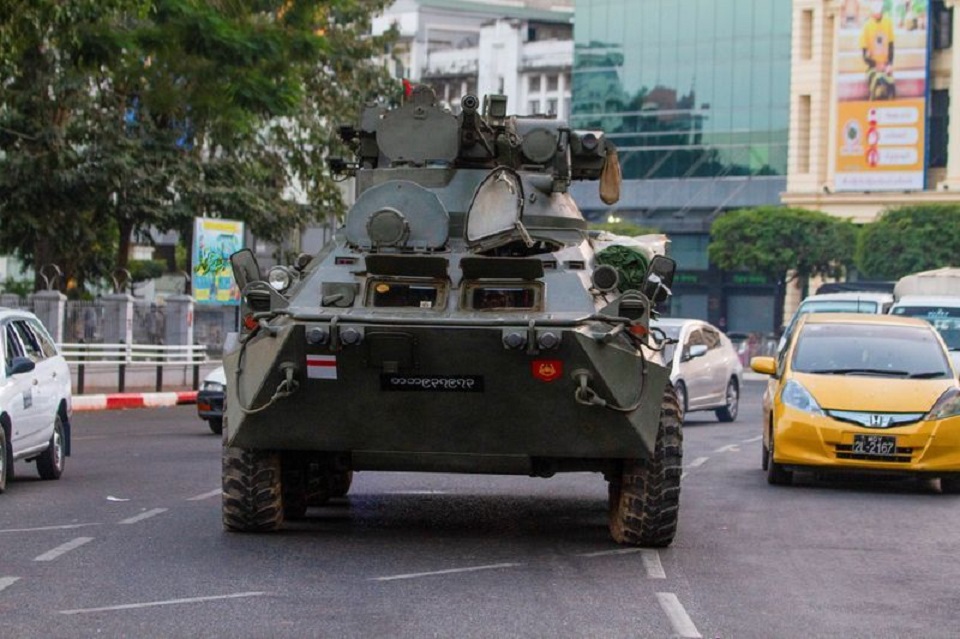 MYANMAR, Feb 15: Security forces in Myanmar deployed with armoured vehicles in major cities and cut internet access on Monday after protests over this month’s coup and the detention of elected leader Aung San Suu Kyi drew hundreds of thousands onto the streets.

Suu Kyi’s detention on charges of illegally importing six walkie-talkie radios is due to expire on Monday. Her lawyer, Khin Maung Zaw, could not be reached for comment on what was set to happen.

Police opened fire to disperse protesters at a power plant in northern Myanmar on Sunday during a ninth day of anti-coup demonstrations against the Feb 1 coup, which derailed the Southeast country’s tentative transition to democracy.

As well as mass protests around the country, the military rulers are facing a strike by government workers, part of a civil disobedience movement that is crippling many of the functions of government.

Soldiers were deployed to power plants in the northern state of Kachin, leading to a confrontation with demonstrators, some of whom said they believed the army intended to cut off the electricity.

The security forces fired to disperse protesters outside one plant in Kachin’s state capital Myitkyina, footage broadcast live on Facebook showed, although it was not clear if they were using rubber bullets or live fire.

On Sunday evening, armoured vehicles appeared in the commercial capital of Yangon, Myitkyina and Sittwe, the capital of Rakhine state, the first large-scale rollout of such vehicles across the country since the coup.

On Monday, more than a dozen police trucks with four water cannon vehicles were deployed near the Sule Pagoda in Yangon, which has been one of the main centres for protests in the commercial capital.

The government and army could not be reached for comment.

Shortly after midnight, residents in Myanmar reported an internet outage. All four telecommunications networks were inaccessible from about 1 a.m. on Monday (1830GMT), they said. In the early days after the coup, the internet was cut across the country.

Western embassies - from the European Union, the United Kingdom, Canada and 11 other nations - issued a statement late on Sunday calling on security forces to “refrain from violence against demonstrators and civilians, who are protesting the overthrow of their legitimate government”.

The U.S embassy in Myanmar earlier urged American citizens to “shelter in place”, citing reports of the military movements in Yangon. It also warned there was a possibility of a telecoms interruptions overnight between 1:00 a.m. and 9:00 a.m.

“Internet shutdown in #Myanmar now in effect again across all major operators, reportedly until 09:00,” Alex Warofka, product policy manager for human rights and freedom of expression at Facebook, said in a post on Twitter after the internet went down.

United Nations Secretary-General Antonio Guterres called on Myanmar’s military and police to make sure the right peaceful assembly was respected and demonstrators were not subjected to reprisals, U.N. spokesman Stephane Dujarric said in a statement on Sunday.

“Ongoing arrests of political leaders, government officials, civil society actors and media representatives are deeply concerning as are the restrictions on internet and communication services,” he said.

In the latest sign of disruption by workers, the Department of Civil Aviation said in a statement many staff had stopped coming to work since Feb. 8, causing delays to international flights.

A pilot, who asked not to be named for fear of retribution, said hundreds of staff from the department were striking. Soldiers were surrounding the international airport in Yangon late on Sunday night, he said.

Trains in parts of the country also stopped running after staff refused to go to work, local media reported.

The junta has ordered civil servants to go back to work, threatening action. The army has been carrying out nightly mass arrests and on Saturday gave itself sweeping powers to detain people and search private property.

Richard Horsey, a Myanmar-based analyst with the International Crisis Group, said the work of many government departments had effectively ground to a halt.

“This has the potential to also affect vital functions – the military can replace engineers and doctors, but not power grid controllers and central bankers,” he said.

At least 400 people have been detained since the coup, the monitoring group Assistance Association for Political Prisoners said.

France evacuates more than 300 people from Afghanistan
52 minutes ago