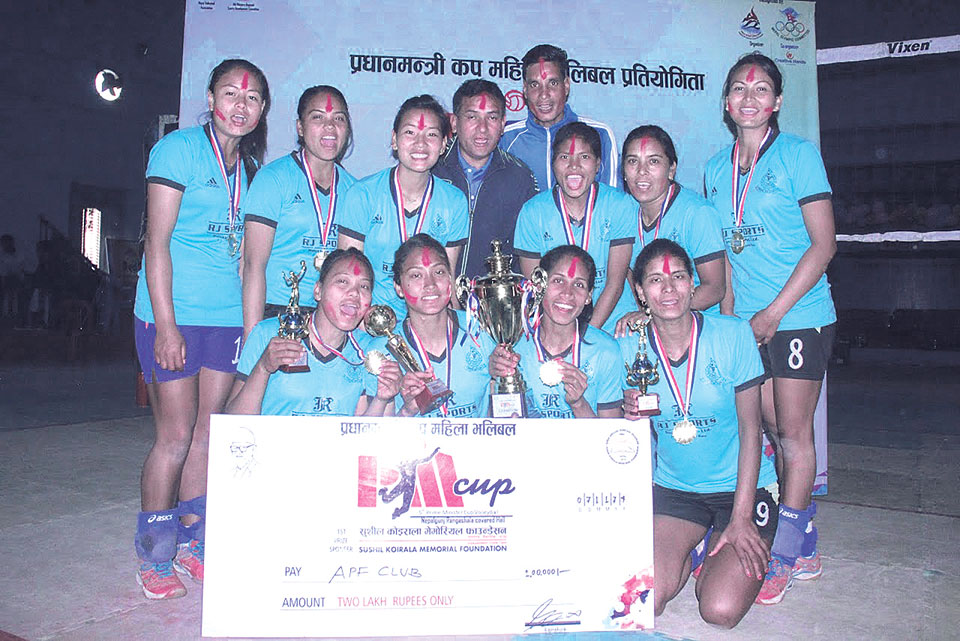 Players of Armed Police Force pose with the trophy after winning the fifth Prime Minister Cup International Volleyball tournament at the Nepalgunj Covered Hall in Banke on Monday. (Republica)

New Diamond made a good start to keep its title chase breathing. The team dominated the first set with the best spiking display from Pratibha Mali and Manju Gurung. But, due to their weak blocking, Armed Police made an easy comeback as player-of-the-match Saraswati Chaudhary contributed 36 points.

The best spiker of the tournament, Mali, however, said that she could not play as expected. “We didn’t play under pressure. We should have been able to block the opponent’s spiking pattern in the second set. But we failed. Armed Police’s blocking was good,” said Mali.

“The game was very entertaining. We are happy despite the loss,” she added. ”We will try to improve in the coming days.”

Armed Police has reached the final of the Prime Minister Cup for the consecutive three times. It had lost to India Railway Team in the last two editions of the tournament.

Armed Police Coach Gyanendra Bista attributed weak receiving for the loss. “Mali and Kripa Adhikari scored many points from service. But, we returned to the game after our defence improved in the other sets,” said Bista.

“Our defence was poor in the final set, but we got success due to our experienced players,” he added.