Arko Kurukshetra, a play of our times 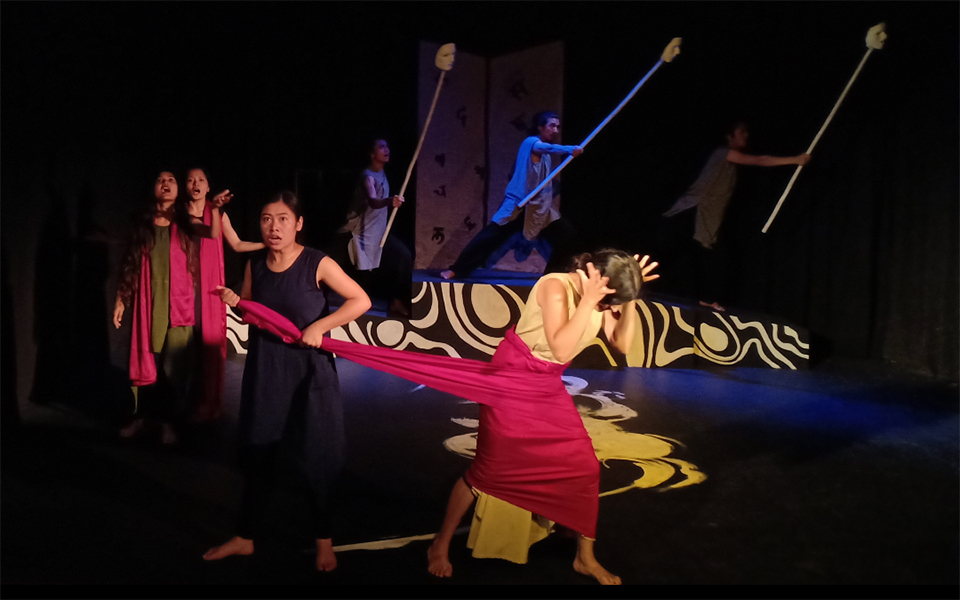 Model-turned actor Usha Rajak plays the protagonist in the play Arko Kurukshetra. Written by Sampada Malla and directed by Ashesh Malla, the play is on show since August 9 at Sarwanam Theater, Kalikasthan. With creative and moving stage props, the play takes the audience through pain and suffering of women since the time of our scriptures.

Colors, lights and props on the stage embody the spirit and mood of society that have subjugated women in the name of religion, custom and culture for ages. The protagonist struggles to break out of the status quo and challenges the society, only to be met with insurmountable obstacles and scorn.

Writer Sampada Malla has done a really good job of bringing stories from the Mahabharata to the current times and provides a long view of the oppression that the women have gone through. Every character she assigns the protagonist somehow can be related by the women of our society.

The story tries to show how women have been under the clutches of patriarchy since the very beginning. It starts with the protagonist questioning herself and the audiences about her existence. Throughout the entire drama she tries to find her own identity but the so-called rules of patriarchy abides her from doing what she wants to.

All the struggles she undergoes relates to how every women are struggling in our society. In every edges of the play, the protagonist tries her best to wrestle out of all the feud, between her strong desire to bring a change and the society that constantly shakes her down. She fails to change the narrative of her story that someone else has written for her. This shows that for women, the battlegrounds have changed, but the battle is yet to be own.

There are also a few beautiful scenes that show blooming love between two characters. At one point, the protagonist is seen falling in love with a guy who fights with everybody else for her.

Usha Rajak has done a remarkable job of embodying various forms of women in the play and has done justice to the role. From bending herself into a role of a young lady to fighting odds, she makes the audience sense every kind of emotions. She delivers her dialogue with energy and gives a strong message to knock the doors of change.

Director Ashesh Malla has done an amazing job by giving life to every character.

Every single character that acts on the stage showcases its full endeavor to shape the play into something that really touches everybody. They can be seen reflecting complete compassion and dedication to give a real feeling to the drama.

Both the director and the crew say that they are happy to get the message across to the audience.
“It was hard for me to fully understand the plot. The play is complicated but the message it gives about women empowerment is a powerful one,” said 22-year-old Bibek Acharya. He described himself to be a regular visitor to Sarwanam.

Arko Kurukshetra is definitely a must watch play for everyone who wants to see the real story of women living and growing up in our society.

KATHMANDU, Oct 26: Nepal U-19 is set to tour Bangladesh to play three fifty-over matches against Bangladesh U-19 in the first week of November 2017. Read More...

Play materials should match the developmental stage of the child. They should also be safe and age-appropriate ... Read More...

Prohibitory orders in Valley likely to be extended by a week, CDOs to take final call later today
13 hours ago

In scary scene at Euro 2020, Eriksen collapses on the field
17 hours ago

Province 2 governor’s memorandum to chief minister: Cabinet is not inclusive
11 hours ago