Area of cultivated land in a decreasing trend 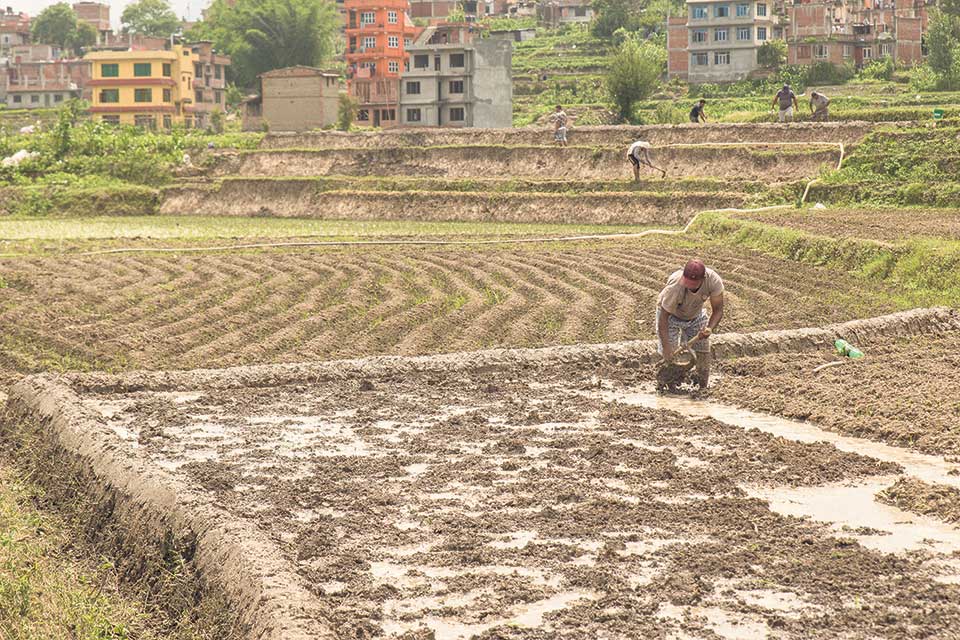 Files Farmers are seen working on their fields in Telkot, Bhaktapur, in this photo taken on June 29. Farmlands are not as ubiquitous a sight in Bhaktapur as they used to be until a few years ago, reflecting the nation-wide trend of agriculture losing ground to urbanization. Photo: Dipendra Rokka

KATHMANDU, Dec 16: Area of cultivated land in the country has been in a decreasing trend for the last three fiscal years, according to a report on economic activities by Nepal Rastra Bank (NRB).
The total land used for cultivation came down from 2,579,097 hectares in Fiscal Year 2015/16 to 2,548,763 hectares in the last fiscal year, decreasing by 30,334 hectares.

The land used for cultivation had decreased by 20,113 hectares in Fiscal Year 2015/16.
According to the officials of Ministry of Agricultural Development (MoAD), the area of cultivated land has decreased due to urbanization.

“Rampant urbanization and housing in the land that was formerly used for cultivation have been seen as major causes for the decrease in the area of land used for cultivation,” said Shankar Sapkota, deputy spokesperson of MoAD. “Drain of youths to other countries has decreased the labor force in agriculture. This has also resulted in the decrease of cultivated land.”

Officials from Ministry of Agricultural Development (MoAD) said that it is not a substantial decrease when it comes about the figures in million and will not affect the agricultural productivity to any greater extent.

According to Vegetable Development Directorate (VDD), 12.03 tons of Onions are produced in a hectare of land. It suggests that if the uncultivated 30,334 hectares land was cultivated all with onions, 364,918 tons of onions would be produced in the country.

This means the country would no longer need to import onions, the price hike of which have increased the spending in Nepali kitchens (Nepal imports 130,412 tons of Onions annually, majority of which is from India, according to Department of Customs).

This small assumption leads to the fact that the decrements in cultivated land are not very small and need serious attention from MoAD and other stakeholders.

Sapkota also questioned the NRB data saying that this does not state the real figures.
“The total land used for cultivation was not exactly 2,548,763 hectares (in the last fiscal year) and the arable land is actually higher than that stated by the report of NRB,” said Sapkota.
According to NRB, the report was prepared on the basis of data from Division Irrigation Offices across the country.

The decreasing trend of cultivated land poses as a serious problem in Nepal’s agricultural sector, which contributes about 33 percent to national economy and employs 66 percent of the total population (source:  MoAD).

BAITADI, Dec 8: A local of Kotila VDC of Baitadi district has donated land to a school of the village. Read More...