Arctic fox walks more than 2,700 miles from Norway to Canada 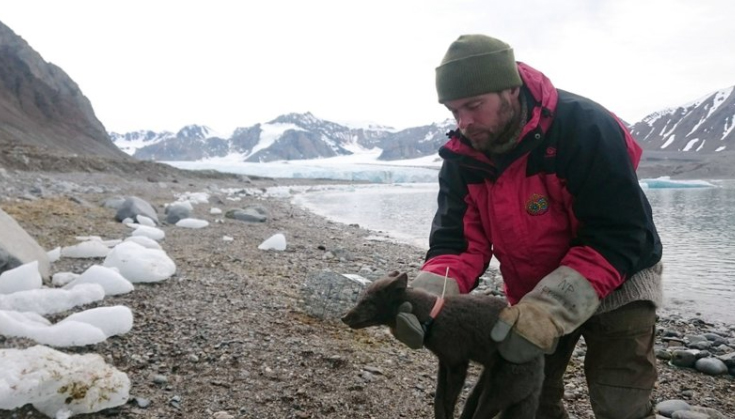 A polar fox is fitted with a satellite tracking collar in Krossfjorden, Svalbard, a Norwegian Arctic archipelago, on July 29, 2017, as part of research conducted by the Norwegian Polar Institute. Norwegian researchers said Tuesday July 2, 2019, that this young female arctic fox, shown in this photo, has been tracked walking from northern Norway to Canada’s far north, a distance of 4,415 kilometers (2,737 miles), via Greenland in 76 days. (Elise Stroemseng/Norwegian Polar Institute via AP)

The Norwegian Polar Institute reported the young female fox left her birth place on Norway’s Svalbard archipelago on March 1, 2018 and reached Canada’s Ellesmere Island by way of Greenland on July 1, 2018.

The ground the small fox cumulatively covered over those four months was among the most ever recorded for an arctic fox seeking a place to settle down and breed, the institute said in a research article subtitled “One female’s long run across sea ice.”

Institute scientists monitored the fox’s movements with a satellite tracking device they fitted her with in July 2017 near her native habitat by a glacier on Norway’s Spitsbergen island. She stayed close to home then gradually ventured out until she left the island on March 26, 2018.

During the walk to Canada, the roughly 2-year-old fox moved at an average rate of 46.3 kilometers per day (28.7 miles per day), the Norwegian scientists said.

“The short span of time spent covering such a distance highlights the exceptional movement capacity of this small-sized carnivore species,” they said.

The distance between the fox’s natal den and where she settled on Ellesmere Island was 1,789 kilometers (1,109 miles) if traveled in a straight line, according to the institute.

The sea ice allows Norway’s arctic foxes to reach Greenland and then North America, though it’s not known why they leave their birth places in search of places to breed, the researchers said.

The animals, which have thick fur to survive cold environments and live to about age four, subsist on fish, marine birds and lemmings.

A Canadian vodka distiller has lost 30,000 litres of valuable iceberg water in what appears to be a heist. ... Read More...