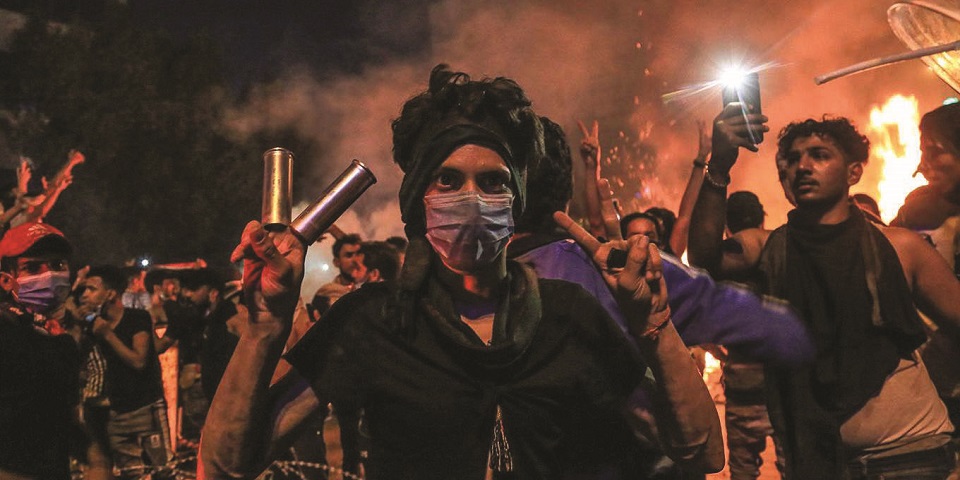 BEIRUT – A new wave of revolts is shaking the Arab world, with Lebanon and Iraq now joining Sudan and Algeria. Recent mass protests in each country have mobilized millions of people from all walks of life, all of whom are angry over the deterioration of economic conditions, which is seen as being exacerbated by mismanagement and poor governance.

As during the 2011 Arab Spring, today’s protests in each country have coalesced around demands for regime change. But there is a key difference: while people’s yearning for dignity fueled those earlier uprisings, today’s protests are propelled by people’s hunger. The Arab Spring has given way to a harsh winter of discontent.

Back in 2011, oil prices were at a peak, and many Arab economies were growing at their fastest pace in decades. Those leading the uprisings were predominantly educated young people who aspired to better jobs and more of a voice in politics and society. Many of the region’s governments were able to calm the streets with the help of expansionary economic policies financed by oil revenues, support from Gulf Cooperation Council countries, and remittances.

But with the collapse in oil prices in 2014, much of this fiscal space disappeared. Ten governments in the region already have debt-to-GDP ratios over 75 percent. As growth has slowed, public expenditures have declined, fueling economic insecurity. Even where fiscal adjustment has barely started, the old model of rent distribution has become unaffordable, and the population has turned against regimes that seem unable or unwilling to make a convincing reformist effort.

Moreover, the new popular movements in Algeria, Sudan, Lebanon, and Iraq have absorbed important lessons from the 2011 uprisings. No longer content with merely displacing aging autocrats, protesters are also targeting key elements of the deep state and the security forces. In Algeria and Sudan, they have rejected quick elections and instead demanded time for new parties to organize, so that they can compete with long-established Islamist organizations.

In addition to demanding wholesale changes to the political system, the current protesters have refused to negotiate with the old regime. In Algeria’s case, the combination of $70 billion in foreign reserves and little foreign debt means that the protest movement and the armed forces can afford to maintain the current game of chicken, with the former waiting for the regime to disintegrate and the latter holding out for popular demobilization. The risk, of course, is that a resolution will not be reached until the fiscal cushion is gone, at which point economic reforms will be much harder to implement.

By contrast, in Sudan, the democratic front reluctantly agreed in August to enter into a power-sharing arrangement with the army. The economy has collapsed to such a degree that cooperation has become the more desirable strategy. The army cannot continue to consume 60 percent of state expenditures now that these have shrunk to eight percent of GDP. For the time being, a technocratic government has been put in charge of stabilizing the economy, leaving the ultimate political bargain for the future—and leaving both sides maneuvering to benefit from the eventual transition.

In this sense, both Lebanon and Iraq are still closer to Algeria than to Sudan, but their economies are now deteriorating rapidly. While Iraq is reeling from declining oil revenues, Lebanon has been unsettled by falling capital inflows, the country’s main source of external rent. These economic shocks have exposed the huge costs of each country’s sectarian-based political system. And demonstrators, driven by economic grievances, have been emboldened by an improvement in broader security conditions, owing to the defeat of the Islamic State and the wind-down of the war in Syria.

In all four of these countries, the severity of economic mismanagement reflects the long-standing use of state expenditures to finance the regime’s allies and clients, rather than to benefit the whole population. These regimes have dominated each country’s private sector through cronyism, not just to extract and distribute rents to clients, but also to block the emergence of autonomous entities that could finance an opposition movement. As a result, capital and skills have been misallocated, the business climate has deteriorated, and competition, innovation, and growth have suffered.

The situations in Iraq and Lebanon are further complicated by the diversity of each country’s population. The regimes that emerged after Lebanon’s civil war in the 1990s, and after the United States-led invasion of Iraq in the early 2000s, rest on power-sharing deals between sectarian oligarchs who maintain their positions through oppression and clientelism. These coalitions could be maintained as long as there were ample spoils to divide among each party’s respective clients. But as rents have declined, the parties have been unable to agree on how to distribute losses, and have instead made a desperate dash for the remaining resources, precipitating an economic crisis. In Lebanon, the costs of this folly are now being borne by an already-fragile financial sector, which could implode.

Finally, regional geopolitical dynamics have also played a role in Lebanese and Iraqi domestic politics. In both countries, political groups supported by Iran possess firepower, but have proven incapable, so far, of crafting a broadly acceptable social contract that would enable them to consolidate their political position.

In any case, history is on the march in Algeria, Sudan, Lebanon, and Iraq. Oil revenues across the Middle East have plunged by about one-third since 2014, leaving autocratic regimes with fewer resources to finance clientelism. As we enter the winter of 2020, this new wave of public discontent is likely to grow and engulf other countries. The challenge for each country will be to find a path to a political and economic transition that can satisfy the street and create conditions conducive to widely shared prosperity.

So far, however, aging regimes, faced with popular movements demanding a more just and productive social contract, are resorting to outright repression, which has so far only emboldened the population to demand more concessions. What comes next is anyone’s guess. No Arab country—not even democratizing Tunisia, where the region’s uprisings in 2011 began—has yet discovered a credible way forward.

Ishac Diwan holds the Chaire d’Excellence Monde Arabe at Paris Sciences et Lettres and is a professor at the École Normale Supérieure, Paris