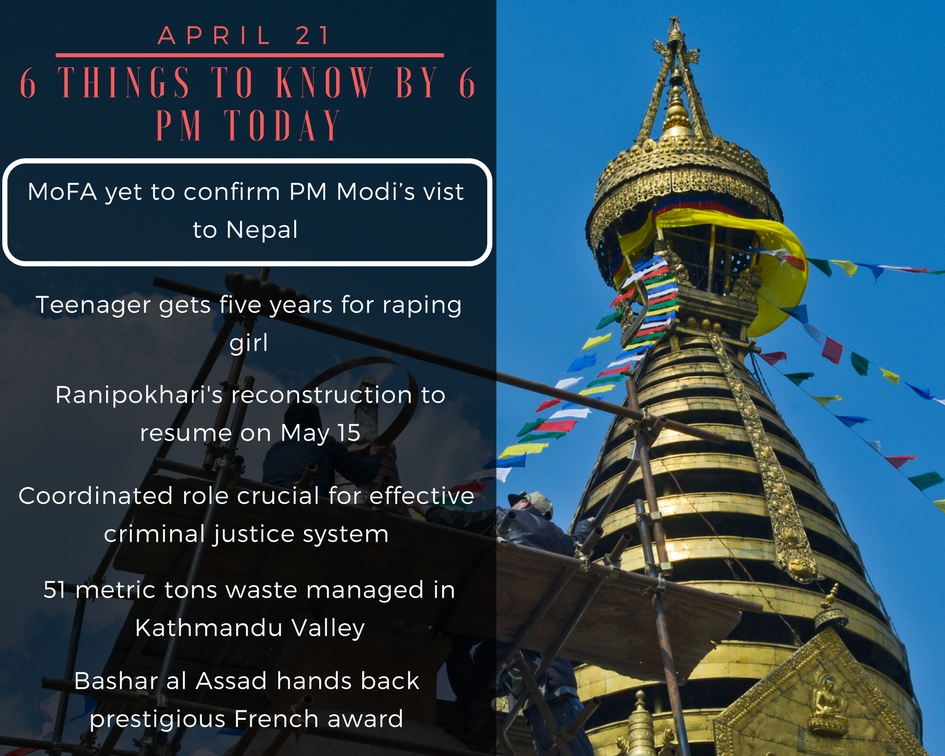 MoFA yet to confirm PM Modi’s vist to Nepal

The Ministry of Foreign Affairs said that they were yet to get confirmation regarding Indian Prime Minister Narendra Modi’s visit to Nepal this May 11. Modi is expected to visit Kathmandu and Janakpur, according to Indian media report.

The Udayapur district court has sentenced five years imprisonment to a 15 year boy for raping a girl. The boy is currently in a rehabilitation center at Biratnagar for the rape. The victim had herself filed a complaint with the police.

Ranipokhari's reconstruction to resume on May 15

Reconstruction of Ranipokhari is expected to resume from May 15. The reconstruction had been halted for the past three months after dispute and public outcry over the use of modern materials surfaced. According to KMC, all modern materials would now be removed and the pond and its area would be developed as per traditional style. The 400 year old Ranipokhari was destroyed in the April 2015’s earthquake.

Acting Chief Justice Deepak Raj Joshi has urged for a coordinated approach between police and the government attorneys along with proper implementation of criminal laws was crucial to make the criminal justice system more effective. During an interaction, Nepal Police said it was committed to enforce the Criminal Code, the Criminal Procedure Code and the Criminal Offence Penalty Determination and Enforcement Act, 2074. These codes are coming into force from August 17.

Syrian president, Bashar al Assad returned prestigious French award, the Legion d'Honneur medal, saying he doesn’t want to be honored by a ‘slave regime of the United States that supports terrorism.’ A week ago French, American and British forces bombed chemical weapons facilities run by Assad, prompting fury from his regime. Al Assad was honored with the award in 2001 when he took office. However, the medal has caused considerable embarrassment in recent years, as Assad began massacring his own citizens during the on-going civil war in Syria.