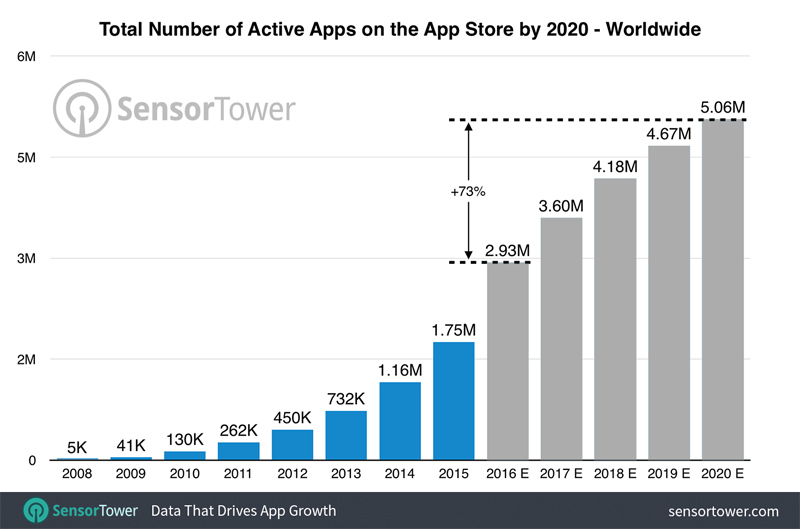 In a research published by Sensor Tower, Apple’s App Store is estimated to home 5 million apps by the end of 2020.

Sensor Tower, an app intelligence platform that helps app developers with app store optimization, produced the figures based on historical analysis of data and trends from the App Store beginning from its launch in 2008.

And in the four years time, from 2016 to 2020, the research projects a 75 per cent growth in the number of active apps as the App Store will host 5.06 million apps.

The report also highlights that amongst the newly added apps each month, majority of them are game apps.  The latest gaming app Pokémon GO has daily revenue of over $10 million, according to App Annie, a business intelligence company.

Earlier this month, Apple’s CEO Tim Cook tweeted, “@AppStore developers have now earned over $50 billion! Congratulations on your success and such inspired creativity.”

“We’ve seen the first steps on Apple’s part to address discoverability issues, such as launching new categories and announcing plans for Search Ads in advance of June’s WWDC (Apple’s World Wide Developers Conference). But in light of our new findings, we’re convinced that far more significant changes to the navigation, curation, and overall presentation of the App Store will be needed to support an ecosystem that’s twice today’s size just four years from now,” said Randy Nelson, Sensor Tower’s head of mobile insights.

The top 5 iPhone and iPad apps on App Store

PM Oli's remarks on Ayodhya not linked to any political subject and have no intention at all to hurt anyone’s sentiments: Foreign Ministry
30 minutes ago