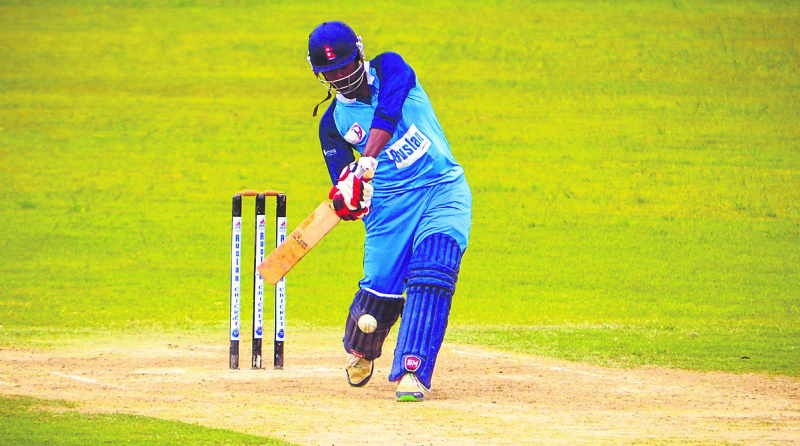 A win against the Central means APF accumulated six points from three matches to become Group A winner and will now take on departmental rival Nepal Police Club (NPC) in the semifinals slated on Monday.

Similarly in the other last four clash, Group B winner Tribhuvan Army Club will compete against Group A runner-up Western Region on Tuesday.

Put to bat first after losing the toss, Central made a total of 187 runs in 48.3 overs while departmental side met the target in 34 overs losing just four wickets.

In the match played at TU Cricket Ground, Central's Hasim Ansari became first player to hit a century in the tournament as he scored 101 runs with the help of one six and 12 boundaries facing 124 balls but couldn't save his team from defeat. Meanwhile, Central couldn't make good start to the innings as its openers Harishankar Shah and Sumit Maharjan built up a partnership of only five runs for the first wicket. To give early breakthrough to the APF, skipper Gyanendra Malla bowled out Harishankar (5) while Sumit (1) was dismissed in Yagyaman Kumal's delivery.

Central lost back to back wickets with Ishan Pandey (7) and Bhupendra Thapa (1) getting dismissed in  the deliveries of APF's skipper Malla and Sandeep Jhora respectively. Sonu Tamang contributed 27 runs off 20 balls and Rashaid Khan made 11 runs facing 31 balls while no other batsman touched double digits for Central.

Skipper Malla was pick of the APF's bowlers as he pocketed 4-40 in 10 overs while he was supported by Bhuvan Karki who claimed 2-21.

Chasing the low target, APF made positive start to the innings with openers Sandeep Sunar and Aasif Sheikh making 41 and 22 runs respectively. APF's highest scorer Anil Sah who came to bat at third number stroked 78 runs off 85 balls that included two sixes and 11 boundaries. Skipper Malla who also was declared as player-of-the-match, contributed 28 runs facing 30 balls remaining not out.

Central's Sashi Keari claimed three wickets while none other bowlers added any wicket for the losing team.