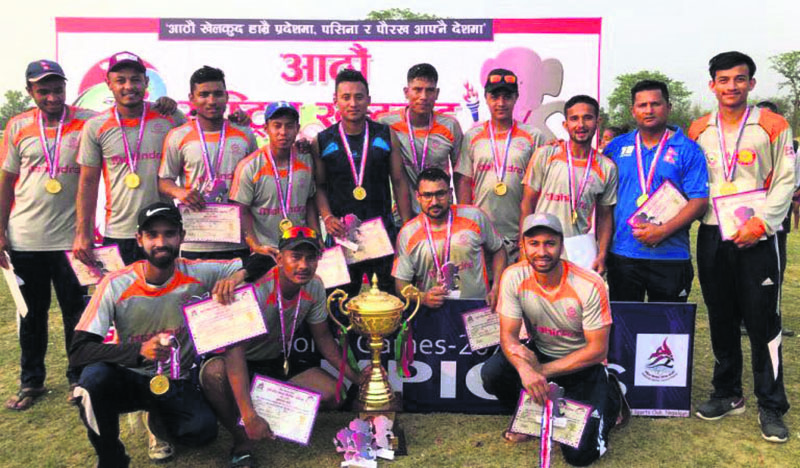 Member of Armed Police Force Club pose with the winners’ trophy and medals after winning the men’s cricket at the Eighth National Games in Nepalgunj on Wednesday.

APF batted first to post a total of 110 runs for the loss of eight wickets in 20 overs. Anil Kumar Sah top-scored with 31 runs from 30 deliveries which included three fours supported by Shankar Rana’s 23 runs from 40 deliveries which included three boundaries and a six. Sah shared a partnership of 30 runs with skipper Sharad Vesawkar for the first wicket and 35 runs with Shankar Rana for the second wicket.

In the match for bronze medal, departmental team Tribhuvan Army Club defeated Province 1 by 69 runs to secure the win at Kohalpur Cricket Ground in Banke on Wednesday. Army and Province 1 had lost to Police and APF Club in the semifinals on Tuesday.

Army batted first after winning the toss and scored 111 for the loss of seven wickets in 20 overs. Nepal U-19 cricket team captain Rohit Kumar Paudel top-scored with 34 runs from 20 deliveries which included two fours and two sixes to help the departmental team post a respectable total in a pitch difficult to bat.

Similarly, Bhim Sarki scored 19 runs in the match supported by Hari Bahadur Chauhan and Rajesh Pulami Magar’s 12 runs each. Pushpa Thapa picked up two wickets for Province 1.
In reply, Province 1 was bundled out for 44 runs in 10.5 overs. Thapa and Shravan Yadav contributed 12 and 10 runs, respectively, whilst none of the other batsmen was able to reach double figures during the chase.

Bhari was adjudged the player of the tournament. Similarly, Sudur Paschim’s Khadak Bohora and Army’s Shahab Alam were adjudged best batsman and bowler of the national games.