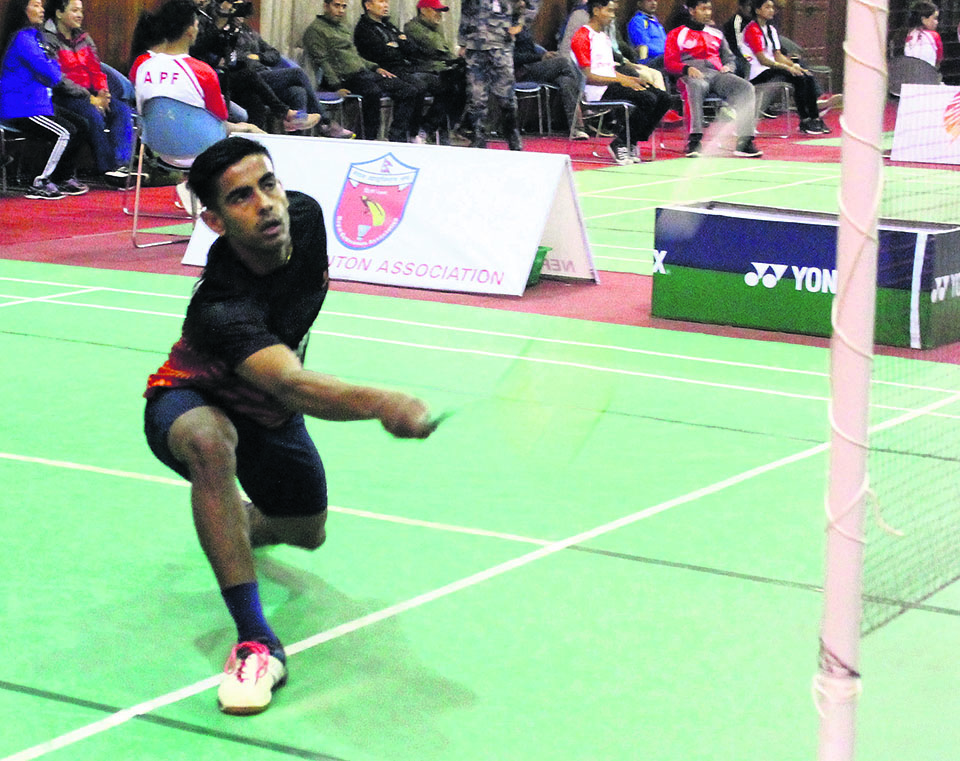 At the APF’s Covered Hall in Halchowk, Dhami and Shrestha defeated other APF pair of Bijeet Thapa Magar and Shova Gauchan 21-10, 21-12 to lift the title of mixed doubles.

In the semifinals of the men’s singles, Dhami saw off Army’s Praphul Maharjan 21-12, 21-15 to reach the final.

In the semifinals of the men’s doubles, APF’s Dhami and Magar got past Police’s Acharya and Deepak Bohora in a straight set of 21-18, 21-17 to book their place in the final.

Likewise, in the other semifinal clash, Praphul and Suroj of Army beat APF pair of Sudeep Sedhain and Sajan Krishna Tamrakar 21-14, 21-19 to reach the final of the tournament.

In other categories, Army’s Rasila Maharjan entered the final of one category, while won the title in the other. Silk Group’s Dahal did the same and maintained his domination in the categories he played in.

In women’s singles semifinals, APF’s Jessica Gurung and Army’s Maharjan reached the final after they beat their respective opponents on straight sets.

Earlier, in the semifinals, Maharjan had defeated Morang’s Nita Lamsal 21-17, 21-14, while Rajbanshi had secured her place in the final with a 21-13, 21-9 set victory over Army’s Ranjana Bhatt.

The APF pair of Pooja Shrestha and Jessica Gurung will take on the Army pair of Anu Maya Rai and Rasila Maharjan in the final of the women’s doubles.

Shrestha and Gurung defeated Army’s Amita Giri and Ranjana Bhatta 21-13, 21-11, while Rai and Maharjan knocked out APF pair of Shova Gauchan and Sunaina Mukhiya 21-18, 21-11.
The final matches will be played on Friday.