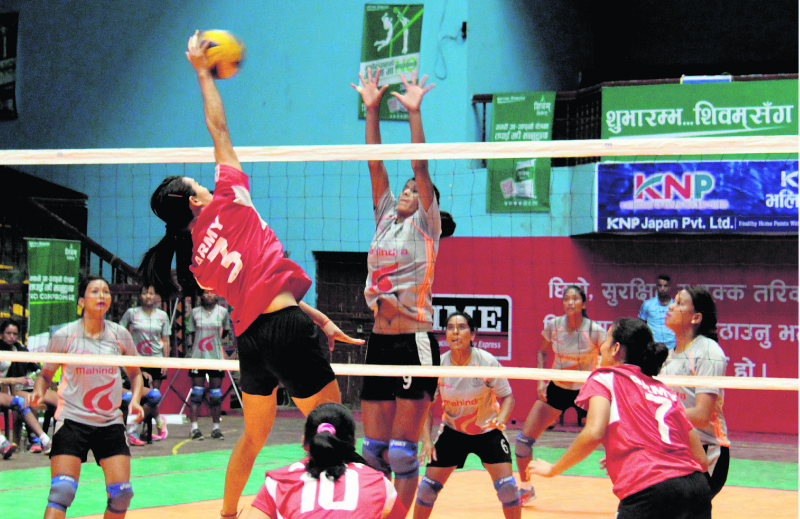 KATHMANDU, June 7: Defending champion Armed Police Force (APF) and runner-up Nepal Police Club (NPC) of KNP National Women's Volleyball are set to battle in the semifinals of the tournament at Dasharath stadium's covered hall on Thursday. Similarly in other semifinal match of the competition, New Diamond Academy will take on Western Region.

APF registered double wins on Wednesday to advance to the semifinals as group A winner. In its first match of the day, APF overcame Western Region 25-19, 25-13, 25-13 while it defeated departmental rival Tribhuvan Army Club 25-15, 25-12, 25-13 in other match. Despite facing defeat at the hands of APF, West also booked its place in the last four as group runner-up.

APF is the most successful team of the tournament that is organized by Sher Bahadur Khadka Memorial Foundation, every year. In the finals of the last two editions, APF had lifted the trophies defeating New Diamond and NPC respectively.

Similarly another semifinalist NPC defeated Jawalakhel Volleyball Training Center in the straight sets of 25-1, 25-12, 25-20 in the group B match.

Jawalakhel faced another defeat of the day as it was beaten by New Diamond in the straight sets of 25-7, 25-10, 25-6. Wins over Jawalakhel made New Diamond and NPC group winner and runner-up respectively. After failing to win single match, both Jawalakhel and Army have crashed out from the competition.

New Diamond is taken as strong competitor to title favorite APF in the tournament. New Diamond's Coach Kumar Rai said that he expects to win to the tournament this time. “In the last edition we crashed out from the semifinal but this time we want to improve our record and lift the trophy eventually,” said Coach Rai.

“If we play up to our potential we can win the trophy this time,” concluded Rai.
The champion of the tournament will take Rs 150,000 home while the runner-up will be rewarded with Rs 100,000. Likewise the third placed team will win Rs 50,000.