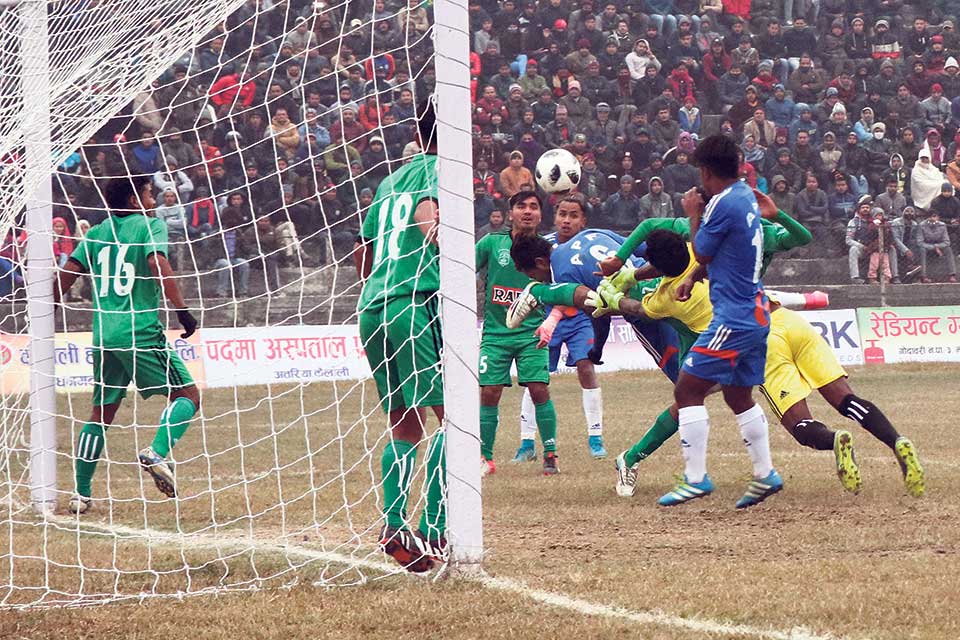 At the Dhangadhi Stadium, Sahara wasted many opportunities to score, including a missed penalty in the 21st minute of the match. Sahara’s Binod Gurung missed the penalty shooting just outside the frame of goal.

The match was pushed into the penalties, after the teams finished goal-less in the regulation time. APF’s goalkeeper Raju Nagarkoti saved the crucial penalty of Laxman GC to send the departmental team into the last eight.

Nagarkoti won the man-of-the-match award and was prized with Rs 10,000 for his contribution.

APF’s head coach Ratna Kaji Maharjan expressed his happiness after winning the match, but said the team could not coordinate well with each other in the match.

“The climate made us suffer, but we will improve our performance in the next match,’’ Maharjan said.

Sahara’s head coach Kiran Gurung expressed his frustration as his team failed to convert the chances into goals and also missed a penalty.

“We lost the match as we failed to covert opportunities into goals in the match,’’ Gurung said.

Kathmandu’s CMG Sankata Club and Dharan Football Club will take on each other on Sunday. The tournament, which started on Friday, will conclude on January 15.

A total of 11 Nepali teams and a Bhutanese team are taking part in the tournament. The winner will get Rs 1.11 million, while the runner-up will be prized with Rs 555,555, informed the organizers. Likewise, the best striker, the best midfielder, the best defender, and the best goalkeeper will be rewarded with a motorbike and purse of Rs 15,000 each.

KATHMANDU, Jan 5: Far-western Region on Thursday secured their Super League berth after a struggling 1-0 victory over Central in the... Read More...

Twin wins for APF in volleyball