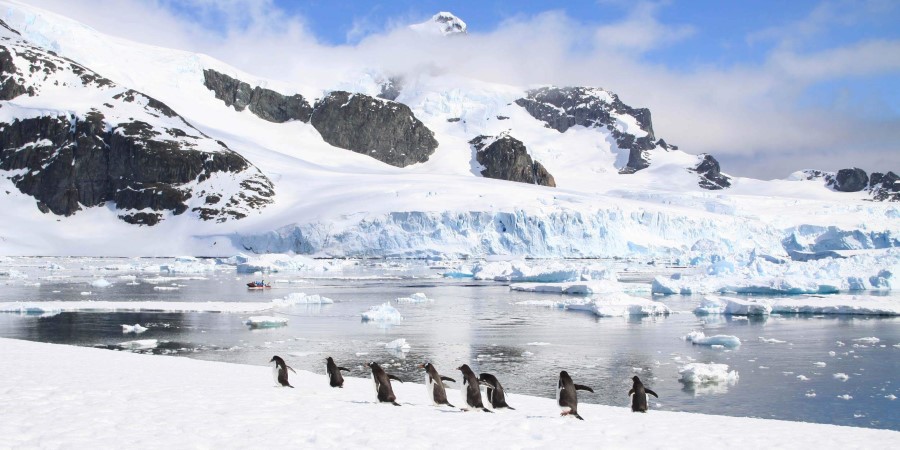 Scientists have long known that rising temperatures are melting Antarctica's vast ice sheet, sending water into the Southern Ocean and raising sea levels around the world. But many were surprised last week by a new study showing that Antarctica's ice is melting three times faster today than just a decade ago.

In light of the unwelcome news, what lies ahead for Antarctica? Will rising temperatures cause the southernmost continent to lose most or all of its ice — and trigger catastrophic flooding around the world? Or will we find the political will and the scientific know-how to limit the carbon emissions that fuel climate change and keep Antarctica frozen?

For the answers to these and other questions, NBC News MACH spoke with climate scientist Stephen Rintoul, who has done research describing two starkly different scenarios for Antarctica five decades in the future: one shows what will happen if steps are taken to curb the carbon emissions, the other what happens if we do nothing.

Rintoul: Antarctica is remote, but it's closely connected to the rest of the world. The volume of ice in Antarctica — if it were all to melt — is enough to raise global sea level by more than 50 meters [more than 160 feet]. Even a small change in the Antarctic ice sheet might make a big change to sea level.

How fast is the Antarctic ice sheet melting?

That's a very small fraction of the total Antarctic ice sheet — about 0.01 percent. But even that small change has been enough to raise global sea level by a measurable amount, and the rate at which Antarctica is contributing to sea level rise is accelerating. Over the past five years the rate of ice loss from Antarctica is three times what it was 25 years ago.

How much of the ice would need to melt before we notice the effects?

We're already noticing the sea level rise that has happened to date. The flooding in New York with Hurricane Sandy would not have been as serious as it was if sea level had not risen over the last century or so. And in many coastal environments around the world, we're seeing an increase in the frequency and the size of coastal flooding. We're feeling it already even with a global sea level rise which is much smaller than what's forecast to come in the coming decades.

What happens if we fail to curb carbon emissions?

Under continued high emissions, one of the most serious consequences by 2070 is that the floating ice shelves around the edge of Antarctica will have started to thin and weaken and break up. As the ice flows off the Antarctic continent, it reaches the ocean, and some of it starts to float — those are the floating ice shelves. They act like a buttress or a barrier that helps restrict the flow of ice from the Antarctic into the ocean. If we weaken those ice shelves or remove them, more ice flows into the sea. That increases sea levels.

By 2070 under that scenario, the Antarctic contribution to sea level will have increased by about 27 centimeters. If we want to avoid that scenario, we need to make a decision to reduce emissions sharply within the next decade.

How would rising seas affect us?

A study estimates that the damage caused by coastal flooding in about 150 coastal cities will reach a trillion dollars a year within the next 50 years — if we don't protect the coast. And the cost of protecting the coast will be about $50 billion a year. It doesn't take a huge amount of sea level rise before we're coping with a flood event that used to happen once a century now happening once a decade.

What if we take effective steps to reduce carbon emissions?

One way to think about it is that to keep temperatures below a certain threshold — say, to keep warming below 2 degrees [Celsius] like the Paris [COP21] agreement set out to do. We have a budget of carbon that we're allowed to spend, and we've already spent about two-thirds of that budget. The longer we continue to emit high levels of CO2, and spend that budget, the less we have left for the rest of time. And so, it really is important to turn that emissions trajectory downward as soon as we possibly can to buy us more time.

What will it take to make that happen?

I don't downplay the challenge of fully realizing that low-emissions trajectory. And the longer we wait to turn emissions around and start decreasing the amount of greenhouse gases we emit, the more difficult it becomes, the more costly it becomes and the more quickly we need to do it.

The causes for optimism, and there are some, are that some groups in nations, industries, communities and regions are starting to take this seriously. They're taking it seriously both because they appreciate the consequences of not acting but also that they see opportunities in a low-carbon economy. It means we don't have to wait for the political system at the national level to reach agreement that we're going to get serious about action. We can do it in smaller steps taken by many individuals and groups around the world.