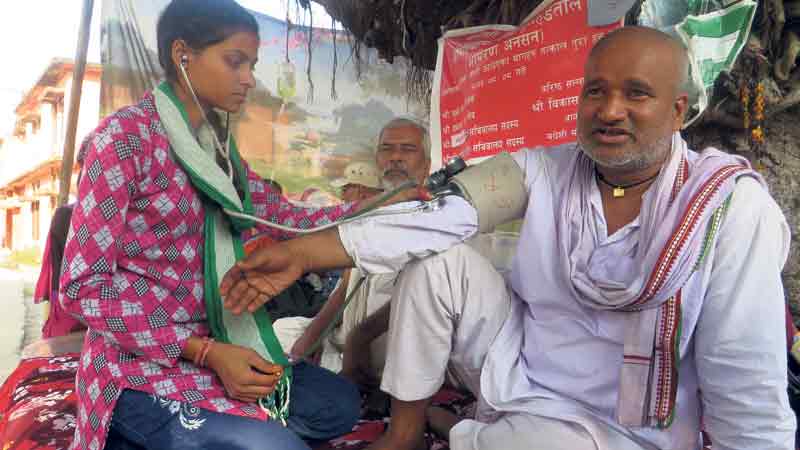 Bikash Tiwari has been staging a fast-unto-death in front of the Gajendra Narayan Singh Sagarmatha Zonal Hospital, Rajbiraj since the last 13 days, demanding better health care for the poor. Photo: Mithilesh Yadav/Republica

LAHAN, Dec 4: “There is quota, but no doctor. There is income, but no expenditure. There are tools but no use.” This is how Bikash Tiwari, who is on fast-unto-death with a 22-point demand, explains the condition of government health facilities. “Thousands of poor people visit government health facilities in hope of getting treatment, but there they just get further suffering. Where are the poor supposed to go for treatment?” he questioned.

Tiwari who has been staging the fast-unto-death in front of the Gajendra Narayan Singh Sagarmatha Zonal Hospital of Rajbiraj for the last 13 days showed worrying health signs on Saturday. Following this, he was administered with saline water. However, he is adamant that he would not take a break until and unless the government comes up with short and long term solutions for addressing the problems with government health facilities. “Ensuring basic health facilities to all people is all what I am demanding. Unless that is guaranteed by the government, I will not break the fast,” he asserted.
His peaceful protest under a tree within the hospital premises steals attention of many. Some even meet him and offer their support. However, concerned authorities have shown no interest in his protest so far. “Government hospitals are run in the name of poor and for that hospital authorities receive a lot of facilities and resource. But why does it not reach the poor?”

“This misery is not only that of Saptari. It is just the same all over Madhes. You visit government hospital for treatment but they refer you to private institutions, where poor people cannot afford treatment” Tiwari stated.

It is not that Tiwari was not aware of all these earlier. However, recently, he had to face it directly when his son fell ill. Friends and family members had suggested him to take his son to a private hospital, but Tiwari reached out to the zonal hospital.

“I did know that services in government health facilities are not quick and efficient. However, I did not expect so much of sluggishness and carelessness,” said Tiwari. “During the 10 days of stay at the hospital for treating my son, I witnessed the negligent and some times rude behavior of poor people by hospital authorities. It is disgusting,” he added.

Without selling of land or taking loan, it is not possible for a commoner to recover even from a minor ailment Tiwari said pointing to the steep health treatment costs in private health facilities.  “My fast-unto-death is purely for those poor people whose health rights the government has guaranteed just on papers.”

What saddens Tiwari most is that the poor people are not getting due service even when the state is actually releasing budget in their name. Government hospitals lack management and massive embezzlement of funds have left the hospitals in a sorry state, he claimed. “If these issues are addressed, many people could live healthier life.”

During the 10 days of stay in the hospital Tiwari’s son never got food as prescribed by the doctors. The toilets were littered to such an extent that none could be used. There was lack of drinking water. “I also saw that pregnant women were treated harshly, they were deprived of free services and were made to pay for services which they should recieve for free,” he said adding that “the hospital is not operating the way it should be in lack of proper leadership.”

Tiwari could not take this all and decided to go on fast-unto-death to protest and correct it. He believes that the concerned body will open eyes and address the problem. “The goal is to hit the apathetic attitude of the government towards the poor people and create an environment where even the people without much asset or money get better health services,” he said.

Social worker and Rajbiraj based journalist Shiva Hari Bhattarai informed that Tiwari is gaining public support though the government has not yet shown any interest in the protest. According to him, Tiwari’s health is deteriorating. “Yesterday, he was given saline water. His health is worsening day by day,” he said. “His mission is for all. Basically for poor, we all must support him,” he added.

He is the first person in the district to wedge war against the deprivation of poor from health facilities by opting for fast-unto-death, Bhattarai said. “He has raised 22-point demands that include long and short term issues and their solutions. The hospital can immediately fulfill few of them,” he informed.

Among those who have expressed solidarity with Tiwari is Shailendra Shah, central member of Sanghiya Samajwadi Forum. Stating that the noble act of Tiwari cannot be ignored, he urged the hospital authority and the government to break its silence on the matter.

Opinion: What will the world be like after coronavirus? Four possible futures
14 hours ago
India returnees who reportedly participated in Delhi Markaz  quarantined
16 hours ago