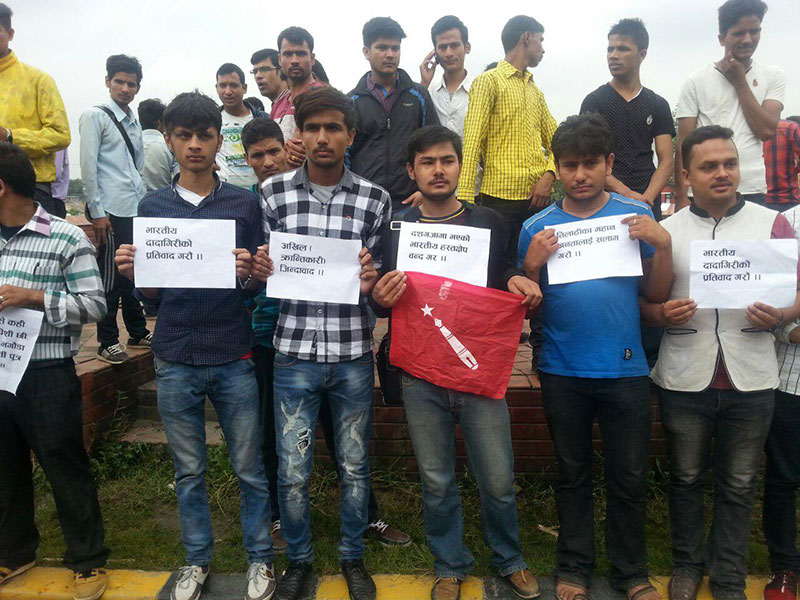 ANNFSU, the student wing of the CPN (Maoist Center), demonstrating against the Tilathi attack at Maitighar Mandala on Saturday. (Bijaya Rai/Republica)

KATHMANDU, July 30: The All Nepal National Free Students Union (Revolutionary), the student wing of the CPN (Maoist Center), has demonstrated Saturday against the attack on Nepalese by Indian side at Tilathi in Saptari district.

The ANNFSU (Revolutionary) demonstrated at Maitighar Mandala chanting different slogans including 'Stop Indian intervention', Let's respect retaliation of Tilathi folks' and 'Madhes and Madhesis are ours'.

At a corner gathering organized after the demonstration, Member Secretary of the CPN (Maoist Center) and former Chairman of the ANNFSU (Revolutionary), Lekhnath Neupane, it was necessary that people from Tarai, hilly and mountainous regions should be united and fight together over the issue of nationalism.

ANNFSU (Revolutionary) Coordinator Narendra Neupane, said that the demonstration by Tilathi folks against intervention of Indian side has now proved that the Madhesi people stand against India.

Students close to ANNFSU (Revolutionary) had participated in the demonstration. Indian side on Thursday attacked locals of Tilathi after Tilathi folks protested, saying the levee constructed by India at no man's land has inundated the area.

KATHMANDU, Nov 30: The CPN (Revolutionary Maoist) led by Mohan Baidya has taken an exception to some subjects of the... Read More...

France evacuates more than 300 people from Afghanistan
53 minutes ago