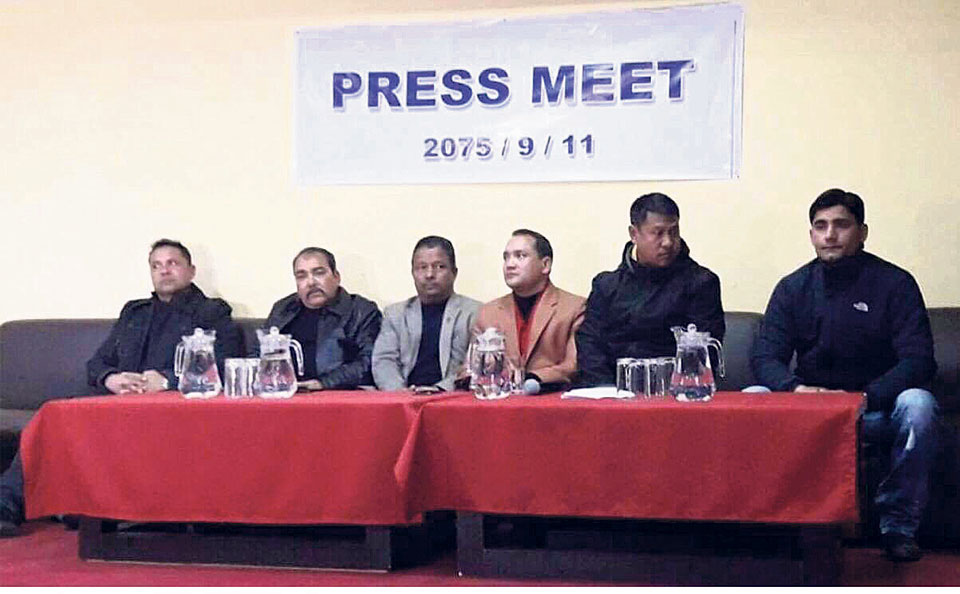 Republica All Nepal Football Association district presidents from Kathmandu, Bhaktapur, Lalitpur and Dhading during a press conference in Kathmandu on Wednesday.

KATHMANDU, Dec 27: Presidents of four district chapters of All Nepal Football Association (ANFA) disclosed, on Wednesday, audio tapes that they claimed to be ‘proof’ that there were irregularities in the ANFA elections held on May 5 this year.

The ANFA chapter presidents said that the elections had breached the laws of Nepal government and international football bodies FIFA and AFC.

According to them, the current ANFA leaders also tried to keep the voters in closed camps in different parts of India, spent a big sum of money on their air tickets, and carried out various other irregularities.

The most notable blame the officials put on the ANFA leadership was that they even threatened to kill the members of the election committee.

Earlier, a presidential candidate of ANFA, Mani Kunwar, had made similar claims about irregularities happening during the elections. He had withdrawn his candidacy at the last moment. Kunwar was not present during Wednesday’s press meet.

The district presidents accused the current ANFA President Karma Tshering Sherpa and his team members including Pankaj Bikram Nemwang of irregularities in the elections, and asked the national and international bodies to take action against them.  The disclosed tape has the voices of ANFA’s honorary president Tashi Ghale, general secretary Indra Man Tuladhar, treasurer Deepak Khati, and members Madhu Sudan Upadhayaya and Dawa Lama.

The district presidents claimed that the conversations of the aforementioned officials clearly showed that they are trying to influence the elections using various means.  “If the leader of country’s football governing body is involved in such type of criminal activity, and FIFA and AFC don’t take action against them, then there is no meaning of free and fair elections. It means you can hold elections any way you like,” the press release reads, “We hope FIFA and AFC will be serious about this and take appropriate action. We inform you that the audio tapes will be kept as proofs for the FIFA’s Code of Ethics. Along with that, we will go to the Commission for the Investigation of Abuse of Authority (CIAA), Parliament’s Public Account Committee as well as the National Sports Council (NSC) to raise this issue.”  They also slammed the football governing body for sending a foreign citizen, Nabin Pandey, as the country’s representative for FIFA Congress. They also blamed the ANFA for committing irregularities in ticket sales of the World Cup 2018 held in Russia.

“We complained with the NSC about their irregularities about World Cup ticket sales and the FIFA Congress representative. But the council has not started any kind of investigation. We filed our case in the council and the Ministry of Youth and Sports, but there has been no hearing yet,” a district President said. “This puts the concerned authorities under suspicion. We request the council and the ministry to be serious about it.”

Universities should focus on producing manpower that can compete internationally: Prime Minister
53 minutes ago