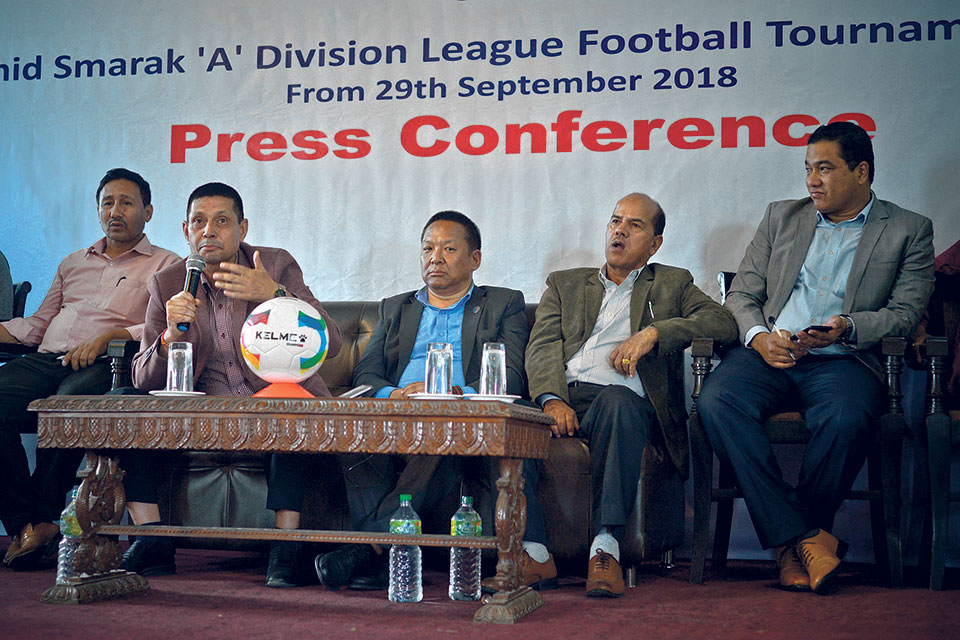 KATHMANDU, Sept 17: The All Nepal Football Association (ANFA) that is organizing the Martyr’s Memorial A-Division League after a long five-year gap, has confirmed that the league will start from September 29 this year.

Organizing a press meet at the ANFA Complex at Satdobato in Lalitpur on Sunday, the organizers confirmed that the league will start on the stipulated date. The league was postponed time and again in the past due to several reasons.

The ANFA working committee had made a decision to this effect on May 5 this year.

General Secretary of the ANFA Indra Man Tuladhar said that a total of 14 teams will take part in the tournament and the matches will be played at the ANFA Complex and Armed Police Force’s Halchowk Stadium in Kathmandu. There will be 91 matches in the league, which will be played in round robin league format.

The ANFA has an estimated budget of Rs 58 million for the event. The FIFA has provided the ANFA with USD 688,000 (Rs 79.06 million) in assistance under the FIFA Forward Football Development Program to support the national football body organize A, B, and C-division leagues.

General Secretary Tuladhar also informed that the association will provide prizes to runner-up through the sixth-placed teams, besides the winner.

The winner of the tournament will take home Rs 5 million, while the runner-up will get Rs 3.5 million and the third-placed team will receive Rs 2.5 million. The fourth, fifth, and the sixth-placed teams will bag Rs 1.5 million, Rs 700,000 and Rs 500,000, respectively.

Likewise, the ANFA also said that it will provide the 14 participating teams with Rs 2 million each in order to support them prepare for the tournament. Also, it will give the fair play award, with a trophy and Rs 100,000, to the team that shows disciplined football throughout the tournament.

The winner of each match of the tournament will also receive Rs 50,000 each, while each man-of-the-match will get Rs 10,000.

Meanwhile, the ANFA announced that the team which will finish in the 13th and the 14th places will not be relegated, but they will have their points deducted by one and two respectively at the start of the next season. Also, they will have to pay Rs 300,000 and Rs 200,000 in compensation.

Earlier, at a press meet after the ANFA’s General Assembly in Chitwan, ANFA spokesperson Kiran Rai had said that the bottom three teams of the league would get their points deducted.

ANFA President Karma Tshering Sherpa said that the participating clubs will have to register their players through an online system.  He informed that each team can have up to four foreign players, but one of them has to be a South Asian player.

Participants will have to present their medical and insurance certificates and contract documents with the clubs at the time of registration.

“At the ANFA Congress, I had talked to Indian football president about including a South Asian player in the league. He agreed to that and he asked me to go ahead,” Sherpa added, “He also said that they will study how it develops and they may have a similar provision of including players.”

Former AIG and the coordinator of the league committee Bigyan Raj Sharma said that ANFA’s first priority was to avoid match fixings and they are well prepared to stop that.

“After I was made the chair of the league committee, I was certain about stopping the match fixings. That will not happen at any cost now. Our first priority is to not let that happen, and we have also decided to deduct points of the lower teams, so I think it is a fair assessment,” Sharma said. “We have collaborated with Nepal Police and have sent integrity officers to New Delhi to study in that regard.”

The matches of the tournament will be played under the supervision of ANFA’s Integrity Department to avoid match fixings.

League Director Sanjeev Mishra informed that the league draw will be made on Wednesday.

Lastly, Tuladhar also informed that Nepal, who has not received half the amount of the prize money from the Bangabandhu Gold Cup, will not be participating if the sum is not provided by September 28. The cup’s schedule overlaps that of the league’s.

“We have received USD 25,000 of the winning prize, but the remaining USD 25,000 has not been provided yet. They have committed to provide the remaining sum by September 28, but if they fail to do so, we will withdraw from the tournament,” Tuladhar said.

However, Nepal has already registered its team for the tournament which will be played from October 1 to 12.

The ANFA has recently signed an agreement to provide the marketing and promotion rights of the league to RamSar (Ram Saraswoti) Media Private Limited, for a price of Rs 10 million.