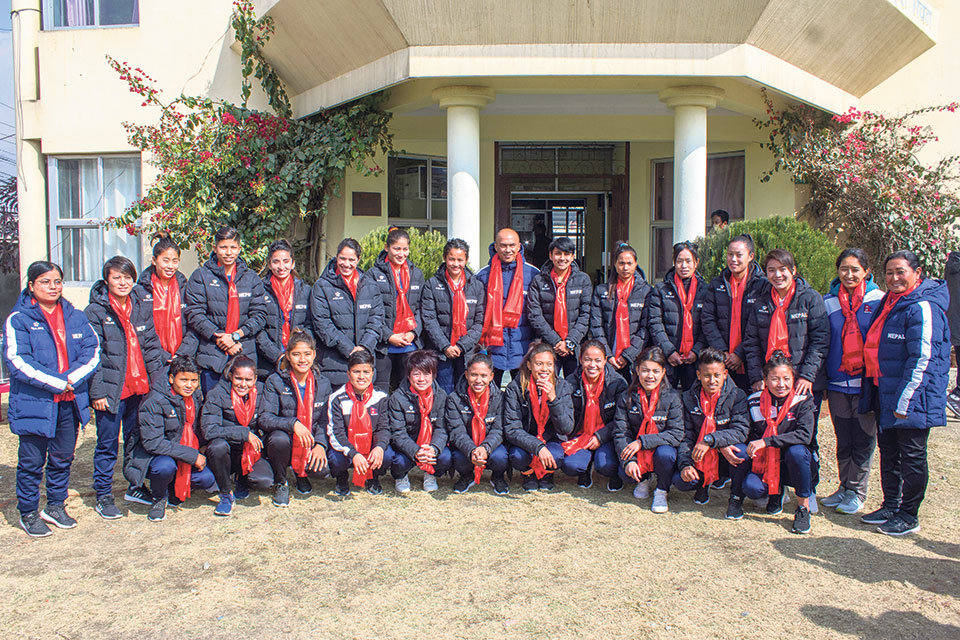 Members of Nepal national women’s football team pose for a group photo before leaving for Jhapa at the ANFA headquarters in Satdobato, Lalitpur on Sunday. Photo Courtesy: ANFA

KATHMANDU, Jan 28: All Nepal Football Association (ANFA) bade farewell to the 23-member Nepal national women’s football team, which is leaving for India to take part in a four-nation tournament, on Sunday.

The team will train in Jhapa for a week and then leave for India for the tournament which starts on February 7.
On the same occasion, the KFA handed over 897 pairs of boots in assistance to ANFA.

“First of all, I would like to congratulate the Nepal women’s national team for their superb performance at the Olympic Qualifiers 2020,” Mong-gyu said, “I am hopeful that the team will enter the last round, performing well in the second round as they did in the first.”

Mong-gyu added, “I hope Nepal and Korea will face each other in the final.”

ANFA President Sherpa said that the team has become greatly motivated due to the KFA assistance. “The women’s team has been performing brilliantly and consistently at international levels,” Sherpa said, “We are hopeful that the performance level will sustain in the coming days.”

On Friday, ANFA had announced the names of 23 players to take part in the Indian tournament.

Nepal is going to take part in the four-nation tournament in preparation for the SAFF Championship which Nepal is organizing at the Shahid Stadium in Biratnagar from March 12. Likewise, the team is also preparing for the Olympics Qualifiers. Niru Thapa is the captain of the team, while Hari Khadka is the head coach. The team is busy preparing for the tournaments for the last two months.

The Nepali team aims to set a record by winning the SAFF for the first time in its history. In the previous editions, Nepal has lost the final three times against India.

The Group A of the championship has Nepal, Pakistan, Bangladesh and Bhutan, while India, Maldives and Sri Lanka are in Group B. Initially, the tournament was planned to be organized in Sri Lanka, but later the country refused to organize it. Nepal then got the chance to organize the tournament.