And he’s back (by popular demand) 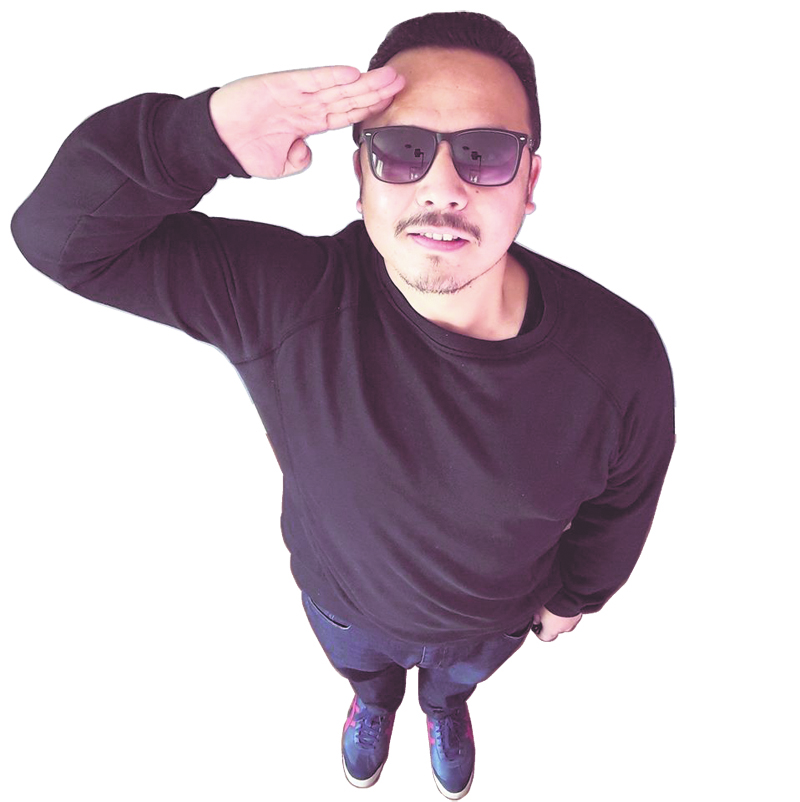 Wednesday this past week marked the 18th broadcast of Asish Syangden’s #asishlive broadcast but in this short span of time, he has managed to talk about a lot of things. Not just music, unlike the old times, from rants about dustmandu, to informal consultation on quitting smoking or a quick intro to safe sex, he has been entertaining to say the least.

And since these weekly, hour-long, 10 pm sessions actually go live on Facebook, of course, you could have trusted him to have appropriate props: condoms, a brinjal, e-cigarettes, he was well prepared.

Now seeing that the former radio host has managed to consistently rake in around 15,000 viewers on a weekly basis, it’s apparent that he was missed. Here, Syangden talks about his new stint and shares his playlist with The Week.

So radio VS live stream, which do you prefer?
It’s been the toughest thing I have done so far. Going live on Facebook is completely different from all those years on radio and TV. Radio had its target audience and share of restrictions, but here, it’s relatively open and I know exactly who are tuning in and then, there is my face, on for an hour straight. I have the freedom to do whatever I want but once you hit the live button, I have to consistently engage my viewers. I can’t stay still. Even when the music is playing, you have to keep them engaged. It’s something else alright.

Did you miss radio? Is that why you started this?
I did it to express myself. It’s not like I have been off radio, I still host shows for a British-Nepali broadcast for those expats living in the UK. But I didn’t want to join commercial radio either. There is no wow factor in it anymore. I thought it would be a fun idea. I came up with a name in an hour or two and posted on my Facebook wall about being online. I just wanted to engage and express. I think it’s a feat to survive 18 episodes to be honest. I wasn’t expecting it.

Does a lot of preparation go into it?
It may have started out randomly but I don’t want to talk gibberish. I think it’s more entertaining when you talk about things we can all relate to. Thus safe sex, smoking, pollution, food, Kathmandu, everything is on the table. I opened a page and started doing it properly after the fifth session, I think. Again, I’m live for an hour so I’d better know how I’m going to spend that time.

Do you spruce up before going live as well?
I usually wear what I wear at home. As long as it doesn’t have a hole in it, it doesn’t matter. It’s all super relaxed. I want to make it natural. I have a drink in my hand, a little sweaty at times, just chilling with the people.

 Iris by Goo Goo Dolls
Those who used to listen to me back when I was doing radio could probably predict this pick. Whenever I wanted to play songs that were my type of music, I would pretty much always put Iris back on. And even now, almost 17 years after discovering the track, I still find this single refreshing. It even made me watch the movie, City of Angels so I always highly recommend it. I also like that where singers tend to usually write about love, the lyrics featured here are about other things. So indeed, nothing has changed, Iris by Goo Goo Dolls is still my favorite go-to song.

 Samasya by Shubha Pravat (Pravat Manandhar)
I met actually met him while he was playing at a bar more than a decade back. I was instantly hooked to his style of singing. He was playing a cover with his band but it was such a good performance that I sort of stayed behind after he finished so that I could talk to him. I asked whether he had some original work and as it turned out, there was an album. I think it was titled Shubha Pravat itself. Since we didn’t have MP3 back then, he sent me a solid copy of the album the very next day. At the time, songs usually featured the same three or four kind of chords but his music featured so much more.

 Sahara by Ashish Bangdel
I don’t know if people remember him but back when the likes of Nabin Bhattarai and Jems Pradhan were ruling the airwaves and the sound in our music scene was all pop-y, Bangdel bought this new sound. It was this slow rock jam. I even remember that it was in Image Channel that I first saw his music video because I immediately fell for it. I can’t stress how different this tune was compared to what was popular back then and I loved it. Besides, I have always been a big supporter of independent artists so he is still on my playlist. I wish he was still active.

 Sadharan Manche by Joyous Gurung
I wonder how many people actually know of him. I stumbled upon this song on YouTube almost seven or eight years back and I just loved the feel good vibes it gives. I’m always on the lookout for new artists and music and I think it is always more fun to discover music which isn’t main stream. What’s more, there are many out there these days. Your efforts almost always pay off and this tune was just one of them. I think Joyous lives in America and Sadharan Manche is about just that. It talks about the common people, the boy next door and it just makes you feel good from within.