An old market eagerly waits for the Postal Highway 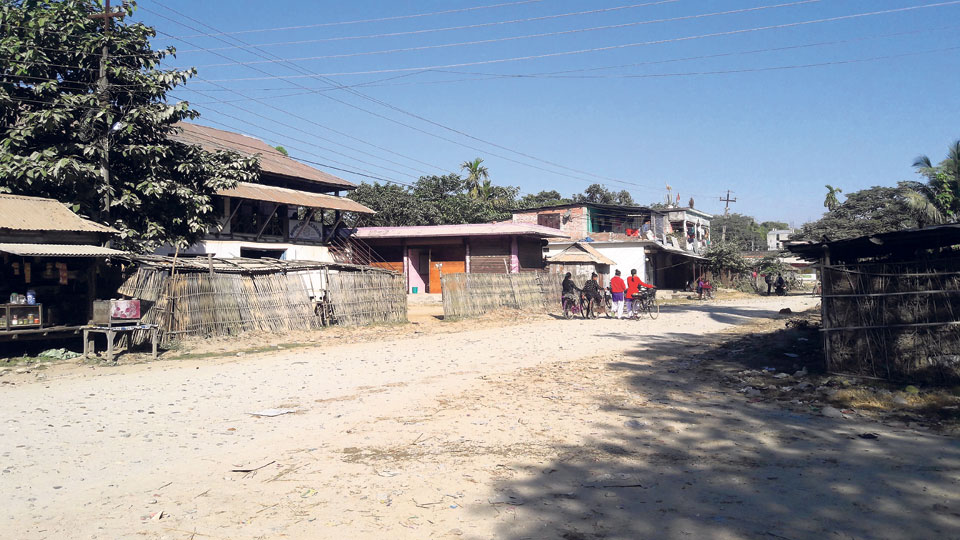 JHAPA, Dec 27: Before the East-West Highway came into operation, Baburaja Shrestha was a well-known businessman Gauriganj. He had good contact with customers from Jhapa and Morang and his shops there did brisk business. “At the time, Gauriganja was the biggest market for the people of Jhapa and Morang. Even people from Illam and Saptari districts used to come to Gauriganj. No matter how much I extended my services, there was always scope left for expansion,” reminisces Shrestha. “But everything changed later.”

Gauriganj stopped attracting customers after the East-West Highway came into existence. And that affected most of the businesses in the area, including that of Shrestha. “I had to close down some of my businesses. There was little scope left to keep the businesses running.”

Another businessman, who owned a business there, Dharma Narayan Das, also shared similar reflections. As there were no markets near the border side, Gaurigunj enjoyed the attention of all the customers around. But soon after the East-West Highway came into operation, the market collapsed. “The highway changed everything. Many businesses were closed.”

Shrestha and Narayan Das, however, hope that the ‘dead’ market may come to life after the Postal Highway comes into operation. “The Postal Highway has remained one of the top agenda of political parties during election campaigns. Though politicians did not revisit that agenda after the elections, this time it seems something has changed. It seems that politicians are pushing for completing the construction of the highway,” Shrestha stated.

Das claimed that reviving Gauriganj market will play a crucial role in reviving collapsed industries in the area. There were some big industries operating here in the past. “Along with the completion of the highway, talks of building a smart city and reviving old industries in the area are making rounds here. It seems that this time, the government is serious about it,” Das said. “As soon as the highway comes into operation, this area will develop rapidly.”

Presently the only big industry operating in Gaurigunj is the Dhiraj Rice Mill. Many tea estates, that operated here, succumbed to the opening of the East-West highway. With customers diverted to emerging markets near them, Gauriganj entrepreneurs also stopped investing capital in the area in the years that followed.

“With the gradual decline in the volume of customers and trade, investment into trade and industries in this area also gradually disappeared. Investors were afraid of making risky investments here,” said Das. “Prior to that, this place was considered suitable for operating large industries as well. He insists that once the Hulaki Highway comes into operation, the place will be a great destination for industrial development.

Madan Rajbhanshi, a resident of Gaurigunj agrees. “Gaurigunj is not supposed to be limited to history books. Once the highway comes into operation, we should put our efforts together to revive its lost glory,” he said. “The government seems serious about completing the Postal Highway and if that happens, Gauriganj will recover its glory very soon.”

Prior to becoming a commercial town, Gauriganj was home to indigenous communities. However, over the time, there has been rapid migration to this place. “Now we are home to people from various communities from across the nation,” Rajbanshi stated.

Most of the migrant population settled in the area when Gaurigunj was doing great in business. But even after its economy stopped booming, people continued settling here. “As such the place is crowded now,” Rajbanshi said.

Neeraj Agrawal, vice chairperson of FNCCI, Jhapa also expressed hopes that the construction of the highway will complete this time. And if that happens, it will be a game changer for the region, he claimed. “Development has been centralized. This has to be decentralized. This highway needed to be built much earlier,” he said. “This was the major election agenda of the ruling party leaders and I feel that they are going to fulfill it this time.”

According to a historian from Jhapa, Ganesh Prasad Pokharel, the old markets have now turned into ‘Chautara’ for people for a get-together. ‘Once it was an economically vibrant place. We are hopeful that the old days are going to come back once the highway is constructed.”

Though the pace of work of the highway construction has not been very speedy the government is now building bridges at many of the places. There are 14 road sections under the project and India has recently released fund for it. “The way the bridges are being made over the rivers has made us hopeful. Let’s see,” said Rajbanshi.

KATHMANDU, August 4: The Postal Highway, one of the national pride projects, is going to miss another deadline of fiscal year... Read More...

KATHMANDU, June 3: The construction of the Postal Highway in the district is still in limbo even after completion of... Read More...

KATHMANDU, Nov 5: Construction works of the Postal Highway in Siraha and Saptari section have been expedited. ... Read More...