An intense yet calming watch 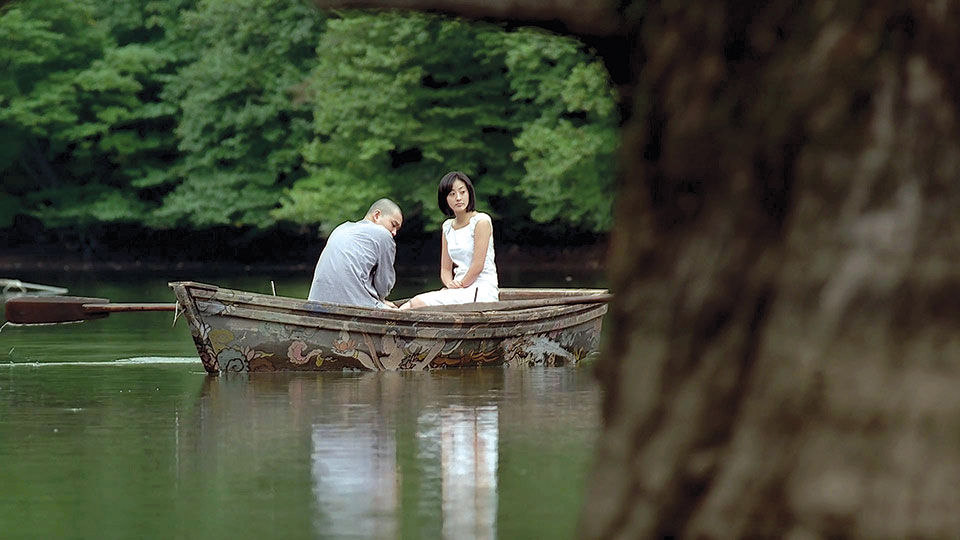 After I watched Spring, Summer, Fall, Winter...and Spring and finally sat down to write the review, I paused for a while. The message I received from it was so simple yet profound that I couldn’t find the words to describe it. But here I’m letting you know beforehand that the film was successful in inducing a pure sense of calm in me that I didn’t know was possible through a film.

Spring, Summer, Fall, Winter... and Spring is a 2003 film written and directed by Kim Ki-Duk. It tells us the story of a monk and his disciple who reside in a small monastery in the middle of a lake. Each season, given in the title, serves as a chapter in the film as well as a chapter of the boy’s life from childhood to adulthood.

The very first scene sets the stage where almost all of the story takes place. A wooden door creaks open to show the monastery floating over a pristine lake situated in the middle of a green, lush forest somewhere in the countryside of South Korea. Inside the monastery live a monk (Oh Yeong-su) and his apprentice, a small boy (Kim Jong-ho). Both remain unnamed throughout the film—the boy refers to the monk as “master” while other people who come to visit him call him “wise one”.

We begin with the first chapter—Spring. As the lake starts glistening due to the morning sun, the monk and the boy wake up to go about their daily chores. Here, the camera follows the boy playing in the creek nearby where he mischievously ties stones (with the help of a thread) to a fish, a frog, and a snake and watches them struggle, laughing. The master is watching him secretly during all of his three acts but doesn’t go and reprimand him immediately.

Later, to teach him a lesson, when the boy is sleeping soundly at night, the monk ties a large rock on the boy’s back. In the morning, the boy wakes up feeling unpleasant and asks the master to untie the rock. The monk reminds him about what he had done to the animals the other day and says he’ll only remove the rock if he frees all the animals. But the monk warns the boy that if any of the animals had died, he will “carry the stone in his heart forever”.

The second chapter in the film is Summer. The apprentice is now in his teenage years and the monastery has a new pet, a rooster. According to Buddhist art, the rooster is the representation of desire and craving. Another thing to note about this film is its use of Buddhist symbols and iconography. Eventually, a sick girl the same age as the apprentice begins to live with them in hopes of getting cured. At first, the apprentice isn’t able to understand his attraction and doesn’t say anything. But soon, both of them fall in love and begin a relationship. When the monk finds out, instead of reprimanding the apprentice, he says that what they feel is only natural but warns the apprentice that “lust leads to desire for possession, and possession leads to murder”.

Finally, we see the apprentice denounce his monastery life in pursuit of love.

To say anything further would be spoiling the film for anyone willing to watch it. But one thing to be noted is that the seasons, the animals, the water and the form of nature shown in every chapter or season are reflective of what the apprentice is going through in his life. And from the title itself, you can guess that the cycle starts again (as Spring arrives for the second time) and the apprentice, who—trust me—has gone through some really tough times post-denouncement, becomes the master.

The film tries to strip humanity from all materialism, consumerism, social relationships, jobs and what not and truly observe it from an individualistic point of view. It shows the raw powers of our inherent evilness and desires as well the power of perseverance, calmness and intellectual and ethical perfection within us.

Furthermore, it highlights the beauty of nature and the fact that we are so deeply connected to it. What I’m trying to say is that if watching this film doesn’t make you want to give up everything that you hold so dear to your heart and go live in the middle of a lake somewhere in a forest, you probably didn’t get it.

Jokes aside, the cinematography is as unfiltered and raw as it can be because shots of such a place don’t really need extra blandishments. The musical score is apt and powerful when needed and the dialogue, though scarce, is compelling.

The movie showcases a lifestyle and situations which most of us probably will never get to experience. It focuses mainly on the beliefs and ideas of Buddhism which not a lot of us will be able to relate to. But the film, ever so subtly, is asking us to take a moment and contemplate and strip away all the burdens that others as well as we have put upon ourselves and try to see ourselves as this pure entity that is passing through life and to try and find that sense of inward peace that so many of us lack in our daily lives. Lastly, it’s also kind of telling us to get our faces out of our phones and computers to appreciate just how beautiful and profound nature is.