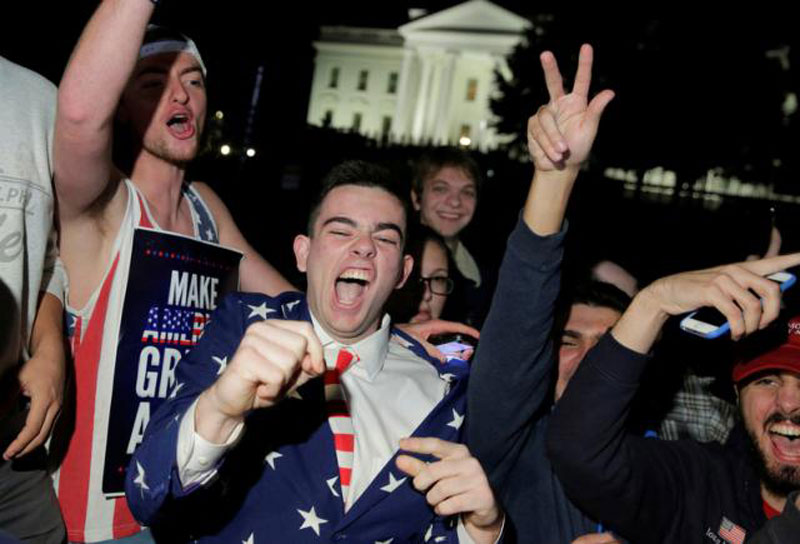 “Up the Establishment!” That was the message voters sent when they elected Donald Trump to be the next president of the United States. It was a message of anger and frustration – and defiance.

The vote was a vehement repudiation of the status quo by half the electorate. As the final votes were being tallied Wednesday morning, Trump and Clinton were running neck and neck in the popular vote. Many of the Trump voters were Republicans enraged by the liberalism of the Obama administration. A lot of Republicans had qualms about Trump and did not regard him as a true conservative. In the end, however, they came home because the prospect of another liberal administration led by Clinton alarmed them. Ninety percent of Republicans ended up voting for Trump.

Trump also attracted a huge following of working-class white voters, many of whom had voted Democratic in the past. They felt threatened by the changes happening in the country: globalization, job loss, immigration and political correctness. His supporters were thrilled by Trump's show of defiance toward Washington, the media, the Republican establishment and received wisdom. Example: Trump has called climate change “a hoax, a money-making industry.” He defies science!

Trump's slogan – “Make America Great Again!” – resonated with them because they want to restore the Old America where wages were high, immigrants were few, white men ran things and U.S. power in the world was unchallenged. When Trump came out to claim victory, his followers chanted in triumph, “U.S.A.! U.S.A.!”

What happened this year is easy to see on a map. Democrats held states in the Northeast and on the West Coast. But states that had twice voted for Obama – Ohio, Pennsylvania, Wisconsin, Iowa – switched to Trump this year. Those are “Rust Belt” states with large numbers of working-class white voters.

Trump's victory was pure populism – anti-elitist to the core. Let Clinton denounce Trump supporters as “a basket of deplorables.” They rose up and gave her the collective finger.

They made a similar gesture to the rest of the world, much of which regards Trump's victory as shocking. Asked to describe his countrymen's view of Trump, a British radio commentator answered, “Disgust.”

How did the polls get it so wrong? Principally because Trump supporters were more enthusiastic about their candidate than Clinton supporters were. What drove Trump supporters was an intense desire for change. More voters said they wanted a candidate who “can bring about change” (39 percent) than said they were looking for “experience” (21 percent), “judgment” (20 percent) or a candidate who “cares about me” (15 percent). Voters who wanted change voted 83 percent for Trump.

Trump embodied change for a simple reason: He is the un-Obama. It is hard to imagine anyone as different from Obama as Trump. Obama is cautious, deliberative, well informed and politically correct. Trump is coarse, boastful, uninformed and arrogant.

Obama is widely admired. But he's seen as ineffectual, and many of his supporters are frustrated by his failure to deliver the “hope and change” he promised. It was hard for them to feel enthusiastic about Clinton, who was seen as the candidate of the status quo. That she was plagued by scandals didn’t help. To his supporters, Trump is seen as the strong leader who gets things done.

Trump may be able to get a lot of what he wants out of Congress because his victory was so unexpected. And he had coattails: he protected the Republican majorities in the House and Senate. Those things create a mandate. A mandate to do what? Trump has promised to abolish just about everything Obama did – Obamacare, immigration orders, environmental regulations, the nuclear treaty with Iran. Voters elected the un-Obama, and that will be taken as a mandate to undo Obama.